Labor offices being raided causes concern, but the story won't help Malcolm much either.

Bernard Keane, Crikey politics editor: A narrow win for Shorten courtesy of Labor’s Medicare announcement and the backlash against Peter Dutton, while David Feeney’s continuing difficulties with his forgotten house didn’t seem to get quite the traction they might have. The AFP raids came too late to make the crucial evening news bulletins, which featured Shorten’s involvement in a car accident that won’t play badly for him at all. All eyes on the weekend polling, though, to see if the Coalition’s switch to refugees has worked.

John Connolly, founder of John Connolly and Partners public relations firm:. To see who won the day, or all the days up until yesterday, look at what John Howard’s middle Australians are thinking. Under Howard and early Rudd, they felt settled, secure and confident about Australia’s place in the world and their future. Fast forward to May 2016 and they are feeling insecure, worried about the economy, worried that Australia can’t compete with Asia, worried about their own lot and worried what happens if they lose their job. Basically they are pissed off. As we’ve said, the Prime Minister’s jobs and growth message isn’t resonating and they feel the government has no answers. But they increasingly like Labor’s “getting a better share” message. Clearly no one had bothered to read Treasury’s research paper that said cutting corporate income tax would have negligible effects on jobs and growth. So we are back to who best protects this great country from the coming apocalyptic invasion of refugees wanting to take our women, men, jobs and give everyone weird names and clothes and make us eat funny food and ride camels.

Dr John Hewson, former Liberal Party leader: It’s only coming to the end of the second week and the distractions are already mounting alarmingly: Feeney, refugees, AFP raids, and so on — all colour and movement, causing some in the media and within the Beltway to salivate, but probably confirming to most voters that these people are off in some parallel universe. Unless one of the leaders can rise above the mire to focus on the issues that matter to the electorate, we are in yet another race to the bottom. No Winner.

Simon Breheny, director of policy at the Institute of Public Affairs: If your offices are raided by the Australian Federal Police during an election campaign, it’s fair to say things are not going well for you. This is the situation the ALP finds itself in after the office of former communications minister Stephen Conroy and the home of another Labor staffer was raided on Thursday night. The attempts by some in the Shorten camp to turn this back on the government are — to put it mildly — a stretch.The AFP raid was just the final chapter in a less than ideal day for Labor. Bill Shorten suspended campaigning for the day after a car overtaking his convoy was involved in an accident. The events of the day overshadowed a major health announcement Shorten hoped would dominate the news. Another day, another win for the Coalition.

The Coalition is spending to train new medical professionals on the Central Coast and protecting vulnerable workers by boosting the Fair Work Ombudsman. Medicare is still the big focus for Labor after yesterday’s big announcement, but no new promises today. 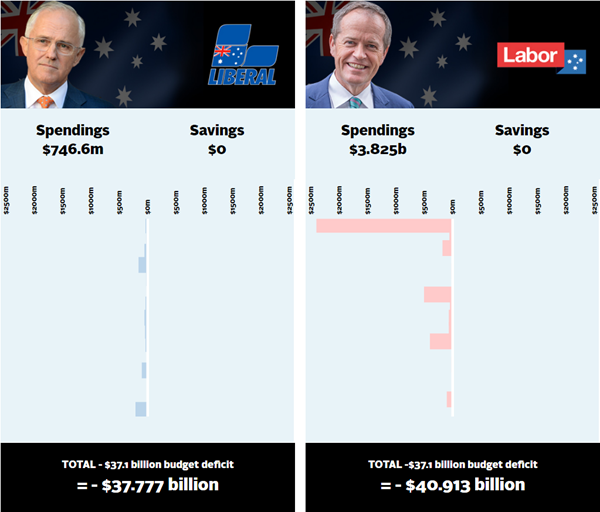 Malcolm Turnbull: The Prime Minister has touched down in Tasmania and spent his first day campaigning in the Apple Isle by teaming up with Tasmanian Premier Will Hodgman in Launceston to promote the jobs and growth message. He talked up the his government’s plan for jobs and growth in Tasmania if the Coalition is returned to office. He warned of the slower growth under a Labor government and discussed the need to provide tax relief for investors. The PM also declared Australia the “most successful multicultural nation in the world” and praised the many wonderful stories of Australian migrants. When the inevitable questions about the AFP raids came, he played a predictably straight bat.

Bill Shorten: The Shorten bus is back on the road today after a head-on collision between two passing cars forced the opposition leader to cancel his engagements yesterday afternoon. Shorten has spent the day campaigning in western Sydney where he plans to win back some of the Labor heartland lost in 2013 by putting Medicare at the top of the agenda. He joined Labor Member for Chifley, Ed Husic, and Labor’s candidate for Lindsay, Emma Husar, at a local medical centre to talk about Labor’s plan to reverse the government’s “GP Tax by stealth”, which he says takes money from the household budget.

Richard Di Natale: The Greens leader spent his day in Melbourne, beginning with an ABC radio interview where he was forced to fend off questions about whether he failed to declare his family farm or properly pay workers. He then went on the offensive, landing a few punches on Malcolm Turnbull by saying he should sack Immigration Minister Peter Dutton. He also said he took Dutton’s comments personally and that they were a deliberate throwback to White Australia.

THE AFP, THE ALP AND THE NBN

The Australian Federal Police have raided the offices of Senator Stephen Conroy and the home of a staffer to Labor’s communications spokesman Jason Clare. Labor frontbencher Tony Burke confirmed the raids and explained that the documents being sought by the AFP contained details of Malcolm Turnbull’s time as communications minister. Shadow attorney-general Mark Dreyfus said the information in the documents would have been a source of “major embarrassment” for Turnbull. That seems a bit odd. What could be embarrassing about an NBN roll-out that had Australia hover around the mid-40s in global internet speed rankings, then fall even further?

The AFP have had a busy week in Australian politics with the Federal Court yesterday granting them the right to examine the text messages sent between former speaker Peter Slipper and his former staffer James Ashby in their investigation of retiring Liberal MP Mal Brough.

TURNS OUT, HE’S ONLY HUMAN

Greens leader Richard Di Natale was flying through this election campaign with his snappy suits, sharp glasses and a warm smile. He was enjoying a kind of popularity usually unheard of for Greens MPs. Now he’s finally hit the skids with questions being asked about whether he failed to declare his family farm on the Register of Senators’ Interests. There are also allegations that he paid three au pair workers below minimum wage. He’s since denied any wrongdoing and insisted he did declare his interests and pay his workers properly but given he recently bashed Labor for not protecting penalty rates he’s probably going to draw a fair bit of heat. Maybe it’s a sign he’s “arrived” as a politician. 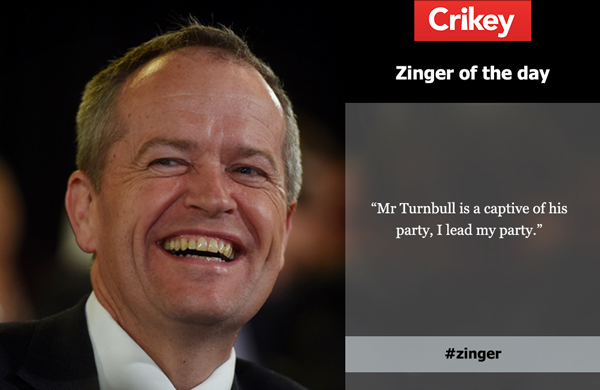 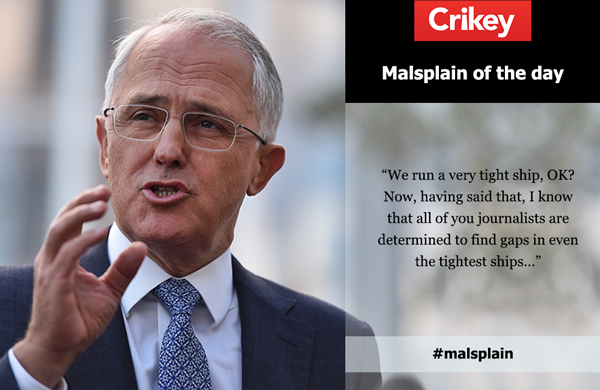 If you missed yesterday’s scorecard then you missed Mack the Dog, the faithful sidekick of independent New England candidate Tony Windsor. So to ensure we give ongoing coverage to the most important issues of the day, here he is again: 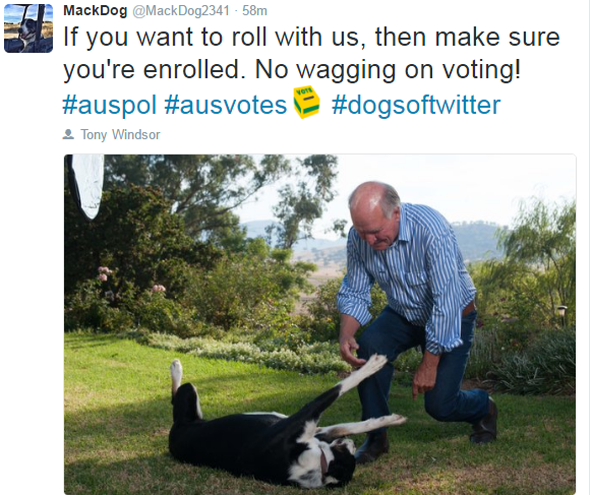 Just to be clear, this publication isn’t an outpost of Tony Windsor’s office. We just feel that Mack’s Twitter account might be the single greatest thing that ever happened in Australian politics.

There aren’t nearly enough colourful characters in elections anymore, so thank goodness Jacqui Lambie has brought some of her friends with her this time. Yes, you read that correctly. The Jacqui Lambie Network’s top Victorian Senate candidate has lots of fun personas that pop up here and there: 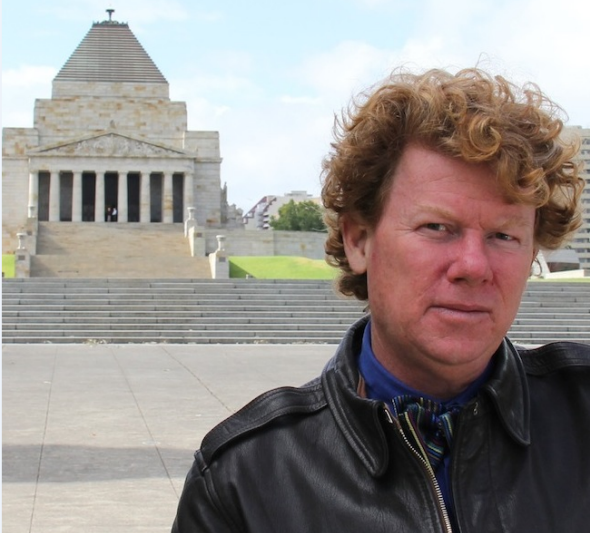 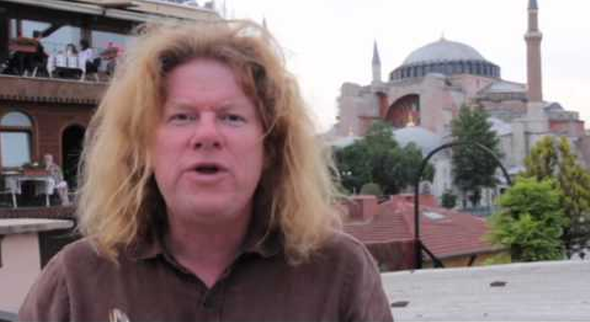 And Hugh Dolan in formalwear 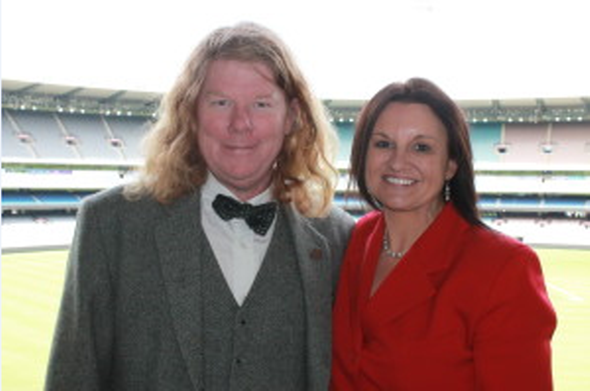 Do yourself a favour and check out his videos — sound only adds to the enjoyment.

His campaign is centered around saying the things we’re all “too afraid to say” like stopping the cultural tidal wave that threatens the “last vestiges of Australian life”. This apparently relates to halal certification, pandering to a militant minority and the apparently inevitable drift towards sharia law. He’s got a point, too; just take a walk down the street and look at all the public lashings for adulterers, or the thieves with their hands being cut off. Not to mention all the atheists being stoned to death for apostasy. We’re practically already there.

A bit of shameless nepotism here, but it’s hard not to give the thumbs up to this little barb from Crikey contributor Ben Eltham.

The shit really hit the fan over the AFP raids of Labor homes and offices, which means hardly anyone noticed Turnbull’s attempts to talk up the Tasmanian economy. While Shorten didn’t get to push his Medicare message nearly as much as he’d have liked. Di Natale tried to deflect the heat about his family farm by declaring it a “beat up”, then attacked Peter Dutton.

So what did Crikey think it was going to get from IPA election commentary?

Agreed, I wouldn’t expect the IPA to say anything else and don’t feel they will add much.

Bernard – you haven’t read the Curry or Maul’s spin on that accident?

“Hamster Wheel” Breheny?
On The Drum the other night telling us “what Dutton really said” (about illiterate, job-stealing, health care bludging refugees) – as he heard it of course?

“Simon Breheny, director of policy at the Institute of Public Affairs: If your offices are raided by the Australian Federal Police during an election campaign, it’s fair to say things are not going well for you.”

So did this one slip right by Mr Breheny’s attention? “The AFP have had a busy week in Australian politics with the Federal Court yesterday granting them the right to examine the text messages sent between former speaker Peter Slipper and his former staffer James Ashby in their investigation of retiring Liberal MP Mal Brough.”

And does he think it is wise by attracting all our attention to how badly the NBN, managed by former Communications Minister Turnbull, fits with his calls for agility and innovation? My guess is that the AFP raid on the NBN papers will backfire.

Why are you giving oxygen to the froot-loops at the IPA? Are you trying to lose subscribers?