Yes, dairy farmers are doing it tough. But commodity prices rise and fall, and the government can't bail out every commodity maker.

You can’t escape the noise issuing from the dairy industry. Lower prices have hit them, and you may be wondering: should we feel sorry for them? Or is this more bleating from one of those sectors that always manages to privatise the gains, but socialise the losses?

Here is the answer. Dairy farmers actually have been screwed, thanks mostly to a higher Australian dollar and lower-than-expected growth in milk powder sales. Prices have been cut up to 15%, on top of a tough year with little rain.

The worst thing is the price fall — announced by buyers just before the end of the financial year — applies to the whole year. It’s basically retrospective, meaning money farmers had counted on is no longer theirs. Mental health in rural areas is a real problem and financial stresses will only make it worse. 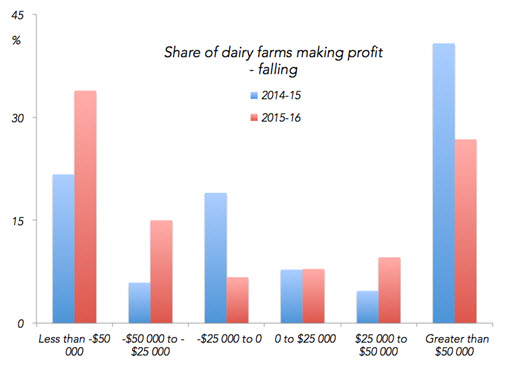 So it is tough times in the milking shed. But the average profit in the industry is better over the longer period, according to estimates by the Department of Agriculture. This year’s expected average farm business loss of -$2000 follows two years where profit was around $65,000 a year. (That profit is after paying for operator and family labour.)

All commodity businesses have bad years. It should not be surprising to us in the cities when prices fluctuate along with global markets, and some operators end up in the red. That’s the way these businesses work.

What is amazing is the outpouring of support.

One hundred thousand signatures on a change.org petition and a six-minute Waleed Aly monologue full of swelling strings and even, maybe, a little tremor in his voice.

And, of course, the inevitable call for government to intervene and slug the rest of us with a levy to make up for this one bad year. That’s where this goes from being simply a very sad story to a public issue.

I tell you, working in the media industry and writing a lot about the retail and manufacturing industries, it’s hard to get too upset for dairy farmers.

Yes, their industry has some structural difficulties. They must navigate big buyers with some price setting power in the form of Fonterra and Murray Goulburn, Coles and Woolworths.

But they have also been riding a gigantic expansion thanks to booming export markets. Australia now has 2.8 million dairy cows, up from 1.6 million in 2009-10.

A few years back prices were at elevated levels, but at that time I didn’t spy dairy farmers on my TV at all. 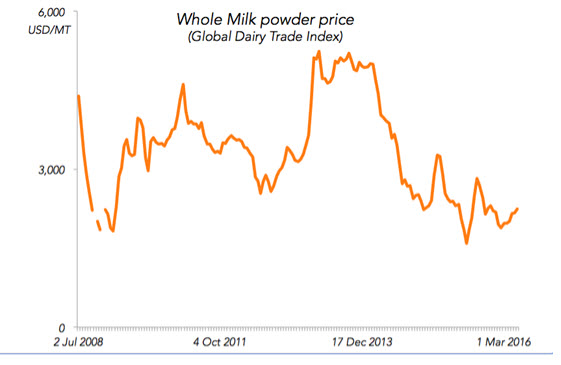 Dairy farmers also benefit from the recent fall in the Australian dollar. It has slipped from over US$1 to around US$0.73, making exporting more lucrative.

So life is not all mud, mastitis and misery for the dairy farmer. Some might even have seen this price cut coming.

While Fonterra and Murray Goulburn were promising to hold this year’s prices steady, the global milk price has been falling. Sceptical and conservative farmers who knew a retrospective price change was possible could have hedged against it.

But the various reasons to not let dairy farmers manage without our collective help get little airtime.

There’s a lot of talk these days about structural privileges. I sure have some. But so do farmers.

For starters, agriculture is privileged by Australia’s electoral system. Almost all other industries are geographically dispersed, so they find it harder to get strong representation in Parliament. Not farmers. Many rural seats depend on agriculture and it shows in the way the sector is treated.

Furthermore, farmers are not struggling in every sense. They may have low incomes in some years, but many have enough collateral to get a loan to cover it. Most farmers are relatively wealthy.

Farmers also capture our hearts and minds. There are only about 6000 dairy farming operations in Australia. But they skew Anglo-Celtic, their workplaces are often really very photogenic and it is tough work. It’s easy to get a bit emotional about the whole thing.

Dairy product promotions often show the fields in which the cows graze. Are those advertisements the reason we have a visceral connection to dairy operators, or do they depict the gumbooted farmer at dawn because we are already in love with the idea of him?

Whichever way the causation runs, the status of dairy farmers is simply higher than a lot of other, equally shitty jobs (many of which, interestingly, are probably more often done by immigrants and women). And that shows up in the outpouring of sympathy when the diary sector falls on hard times. 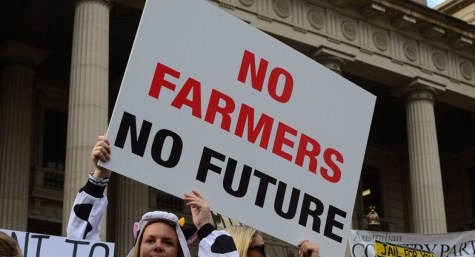 ‘Farmers also capture our hearts and minds.’
Yes, no doubt due to the fact dairy farmers work difficult hours (rising before the birds are stirring) and rarely enjoy the luxury of a holiday.

Police, hospital & emergency workers also capture our hearts and minds due to the nature of their demanding – & often risky – roles. Even the Coalition has a policy their Sunday penalty rates should be excepted from the fate of other weekend employees. Meantime the dairy farmers have no perks, no penalty rates & no special exemptions.

This article states the average annual profit for a dairy farmer is $65K with the inference it’s a generous income. Again to Coalition policy: Turnbull & Co believe workers on $80K deserve a tax cut to keep them from the poorhouse. Hence if those on $80K warrant help where does that place someone on the hard slog treadmill 365 days-a-year earning only $65K?

“profit was around $65,000 a year. (That profit is after paying for operator and family labour.)”

Just as well no one has mentioned the cows.
Their conditions make working at 7/11 look like a doddle.
Industrial farming might be beloved by the “productivity wonks”,
but it sure sucks to be an animal cog in the machine.

All well and good to shrug and say “move on”, but – unlike minerals – the farms won’t go anywhere if they go under. They’ll become dustbowls, or owned by a handful of immense (probably foreign-owned) agri-combines.
A nation’s wealth lies in, and ultimately derives from, it’s land. This is especially true in a time such as ours, with large-scale climate change upon us – to fail to act upon it is silly, to say the least!

>A nation’s wealth lies in, and ultimately derives from, it’s land

what a load of nonsense! A land with no people to work it is worth nothing in economic terms. And people can make a lot of wealth without much land – as Singapore.

My cousins from Kiewa Valley (SE of Wodonga – N Victoria) were raised on a dairy farm. Neither works on a dairy farm now, because they reckon there’s too much work for too little reward. They and their father got out many years ago.
They aren’t happy about what’s happening now, but they believe it’s been coming for decades. Too much work for too little reward, and they really did know what hard work was all about.
So, do the fat cats from M-G or Fonterra know anything about the real trials of being a dairy farmer? It seems unbelievable that they have any conception of what that life really entails.