Fairfax, News and the death of print ... the Donald Trump wasteland ... pay rise for Coke, no joke ...

Are Fairfax and News about to share printing plants? Falling circulation and ad revenues means smaller newspaper books and far smaller print runs, and Crikey hears the News Corp’s 20-year-old printing plants are struggling to cope with the changes.

We’ve heard all sorts of whispers about what’s going on in recent days and decided to put them to News Corp. One source told us the company was in the middle of a $30 million upgrade of its print facilities, but News Corp dismissed that out of hand, with a spokesman saying it was “simply not true”.

More persistent are rumours that News Corp and Fairfax are in discussions about some sort of collaboration on printing and distribution — the Oz reported on talks about doing just that last month.

Crikey is told the talks have been helped along by the fact that News HQ in New York is reluctant to fork out serious dough for upgrades at the moment. Despite their fierce rivalry, there’s already some measure of cost-sharing going on; News Corp has, for a few years, printed Fairfax’s Financial Review in Townsville, for example. It’s understood any further tie-ups would be along these lines — splitting production runs, particularly in the regions, rather than having Fairfax and News Corp jointly operate printing facilities.

Last year News Corp’s Melbourne printing plant (at Port Melbourne) announced 19 redundancies shortly after it stopped printing mX. Every reduction in output terrifies the staff there; large printing plants are most productive when at full capacity. We hear the News Corp print rooms are now convinced News’ capital city daily tabloids will cease publishing daily at the end of next year. That isn’t too far off what Fairfax is reportedly considering. Of course, News Corp is far more committed to print than Fairfax, but that doesn’t mean head honchos couldn’t change their minds, and quickly.

We intend to stay on top of this, so if you’ve heard anything, do get in touch.

Nice for some. Shareholders in Coca-Cola Amatil overwhelmingly approved a big pay rise for their board at the company’s annual meeting in Sydney yesterday. The total remuneration limit for the board was boosted half a million dollars to a maximum of $2.8 million, from the previous $2.3 million. That’s a very handy 21.7% rise. The company’s annual account revealed that total board payments in 2015 were $2.08 million, just ahead of $2.04 million in 2014, an increase of around 2%. So there was a bit of income compression in the boardroom of a company 29% controlled by the Coca-Cola company of the US. But coming on the day when the latest wage index from the Bureau of Statistics showed a 2.1% rise in the year to March (1.9% for private sector workers), down from the 2.2% rate in calendar 2015, the prospective 21% improvement for mahogany row at CCA from now on isn’t a good look. By the way, the chairman of Coca-Cola Amatil is the sainted David Gonski, he of the fabled spending package aimed at saving our schools.

Escape the wasteland. Cards Against Humanity, the “party game for horrible people”, has released a “Donald Trump Bug Out Bag“, which it claims will “help you survive the collapse of civilization after Donald Trump is elected President of the United States”. The bag takes its apocalypse survival seriously including a black duffle bag, water purification tablets, a gas mask, a compass, “a hand-crank radio to scan the airwaves for other survivors” and an application to become a resident of Mexico. The bags retailed for US$25, but they have already sold out. Says the website: “When Donald Trump is elected President, you will perish in the wasteland. Sorry.” 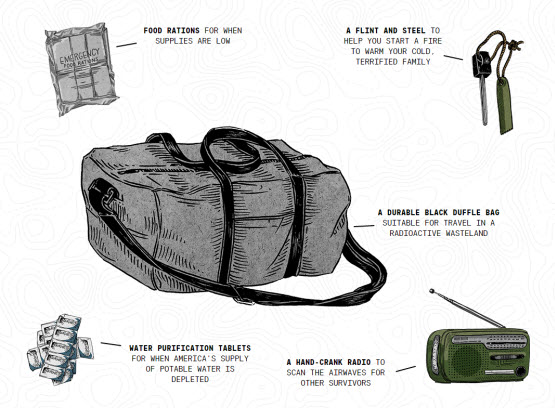 It isn’t the first group to joke about leaving the US if Donald Trump is elected; many celebrities have already threatened to move to Canada, and Trump has responded by saying if they left he would have done “a great service to our country”. US News website Politifact says moving to Canada isn’t all that simple, and people can expect to wait years for the immigration department to approve their move — and they have to have a good reason to leave.

Start-up wars. If you want good independent, reliable research done on the jobs of the 21st century, who do you call? The lobby group for start-ups in Australia, of course. Industry and Innovation Minister Christopher Pyne announced yesterday that StartUpAUS, a not-for-profit that advocates “technology entrepreneurship”, would be funded over the next three years to write a series of reports for the government. The reports will cover “Culture and Entrepreneurship” and “International Analysis of Entrepreneurial Programmes” at a cost of $120,000 a year for the first two years.

“As the Australian Government’s National Innovation and Science Agenda boosts innovation across every sector of the economy, it is critical that we have a clear understanding of the opportunities that will deliver the jobs of the 21st century,” Pyne said in the announcement.

But how clear will the understanding be? StartUpAUS is funded by Google, SalesForce and other start-ups. Will the reports be independent analyses of the industry? Labor’s innovation spokesperson Ed Husic doesn’t think so:

StartUpAUS CEO Alex McCauley has defended the group’s ability to be independent of government, telling StartUpSmart: “We were very clear when we agreed to take on the work that StartupAUS would have complete editorial control over the report themselves, and that the funds were directly linked to the reports and nothing else”.