Crikey Campaign Scorecard: it was a two-party train wreck yesterday

Bernard Keane, Crikey politics editor: A day spent talking about refugees is a good day for the Coalition — a definite win for Prime Minister Malcolm Turnbull, however vile Peter Dutton’s comments and Turnbull’s defence of them were. And that was even before Opposition Leader Bill Shorten’s troubles with David Feeney, who looks as though he is going to cost Labor a seat in an election where every result might end up counting toward a minority government. Then again, there will be plenty of Labor people thinking that, when it comes to Feeney, it couldn’t happen to a nicer guy.

Simon Cowan, research manager at the Centre for Independent Studies: Neither side covered themselves in glory yesterday. Labor’s crusade against negative gearing has met the enemy and discovered, like Walt Kelly before them, that they are us. Meanwhile the Coalition wants to wedge Labor on illiterate refugees but just can’t find the right words. In elections past, they would both have received Ds, but with grade inflation and low expectations it’s just about a pass.

Tasneem Chopra, cross-cultural consultant, commentator, curator and activist: In an appalling show of wedge politics writ large, the equating of “illiterate and innumerate” refugees with stealing Australian jobs (yet who languish on welfare?) was pronounced by Dutton, then endorsed by the PM. Seriously. While polls revealed the economy as the most pressing issue influencing voters, with refugees the lowest, the government’s decision to link the two in an inspired commentary of political dog-whistling, succeeding in offending almost half the nation — of Australians who were either born overseas or have a parent born overseas. Notwithstanding that refugee intake is premised on protecting persecuted individuals, these inflammatory accusations, in fact, contradicted the very data of the Department of Immigration and Border Protection. Reports it commissioned previously showed the vast intake of refugees as educated, literate and making a positive contribution to the economy. Once again, facts have interfered with the fear-mongering of the Coalition, dealing them another blow in credibility. As one media pundit aptly summarised: “Growing hope refugees might take Dutton’s job.”

Meanwhile, campaign trailing through Campbelltown, Shorten was being serenaded by a supporter to the tune of Unchained Melody. How quirky. This shine morphed fast into a case of Unhinged Policy as Major Projects Minister Paul Fletcher claimed Labor’s numbers of $175 million did not stack up to its projections of $400 million for the Port Botany railway line. Interestingly, Fletcher could not comment on what the Coalition might commit. How predictable. All things considered, budget accusations versus attacking the integrity of multicultural Australia with racist invective, the government was the greater train wreck of the day. Toot toot.

Sue Cato, businesswoman, founder of Cato Council and media commentator: For a rare moment of campaign sunshine, I thought I would focus on the good things that came out of yesterday. Upper most in my mind is that there are now roughly only 66,666 minutes to go till 6pm on July 2. And wasn’t it good of Peter Dutton to make sure that the asylum seeker issue was now a problem for both parties — rather than just Bill Shorten. And it’s a big thank you to David Feeney because we probably won’t hear much about negative gearing from the Shorten camp for the rest of the campaign. Indeed, the scale of Feeney’s property investments means we probably won’t hear a lot more about Malcolm Turnbull’s wealth from Labor over the next too many weeks. So to the winner, while it wasn’t all plain sailing, I am going to give Wednesday to the Turnbull camp because they haven’t had to announce a $12 billion dollar spend of our money on the lifting of the Medicare rebate freeze as a distraction from their campaign woes.

Labor’s pulled out the big guns, making the biggest cash promise of the campaign so far: a plan to unwind the freeze on Medicare rebates, which will cost $12 billion over 10 years. And Labor has once again pipped the government at the post; the Coalition’s promise to put $50 million towards improving roads in Sydney’s south-west is identical to the one Labor made yesterday … 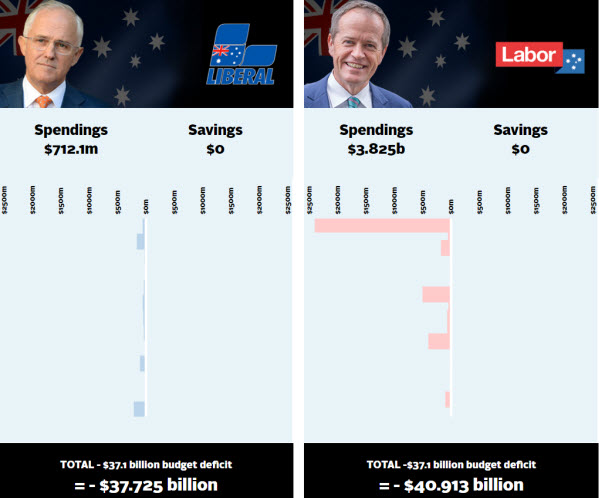 Malcolm Turnbull: The PM caught the train out to Smeaton Grange in south-west Sydney this morning to make an announcement about roads (the same announcement made by Labor yesterday). This is the second time Turnbull has visited the seat of MacArthur in five days; MacArthur was a safe Liberal seat but has become a marginal one following a boundary redistribution. Making the announcement at the chemical tanker company Omni Tanker, which he praised for its “innovation”, Turnbull said the $50 million would improve safety and unlock affordable housing. Asked about Dutton’s comments on refugees he said he was proud that Australia is “the most diverse multicultural country in the world” but “Australians need to know the government they elect will decide who comes into the nation”.

Bill Shorten. The Opposition Leader started the day meeting commuters in Macquarie Park alongside Labor’s candidate for Bennelong, Lyndal Howison. He then headed to a medical centre on the Central Coast where he announced Labor’s plan to unwind the freeze on Medicare rebates: “There is a battle on in this country about the future of bulk billing, there is a battle in this country about the future of healthcare. Labor will fight this election on defending Medicare and defending bulk billing.” He also defended Labor’s asylum seeker policy and talked up his education plan once again.

The Greens: Richard Di Natale will be campaigning alongside MP Adam Bandt and candidate for Wills, Samantha Ratnam, in Brunswick. The Conversation published this interesting piece today suggesting the Greens could pick up more inner-Melbourne seats (including Wills) this election but in doing so could have less influence:

“In the lower house, competition with Labor might produce more Green MPs. But downward pressure on Labor’s vote nationally might ensure the Coalition’s majority.

“In short, it could mean greater numbers for the Greens in the lower house, but less influence and fewer senators. This would in turn mean the continuation of Tony Abbott’s climate-change policy and pressure from the business community for further industrial relations changes, not just the abolition of penalty rates.

“Careful what you wish for.”

Barnaby Joyce: The Deputy PM has undergone surgery to remove skin cancer from his face. “Yes it’s cancer,” he told the Herald Sun yesterday. “I had a melanoma in the past, class 1a. The lowest class but a melanoma nonetheless and if I’d left it any longer we wouldn’t be having this conversation. But I got it right in time. It was a huge wake-up call.”

The all-out war surrounding campaign posters in Adelaide has once again flared up and this time it’s the NXT team in the firing line. Before the election was called, Nick Xenophon attacked the major parties for their “premature erection” of campaign posters, now Liberal MP Stephen Knoll is accusing NXT of putting up posters in illegal positions in the seat of Mayo. NXT’s candidate for Mayo, Rebekha Sharkie, has in turn accused rivals of relocating the signs, posting on Facenbook: “SABOTAGE: all volunteers contacted, nobody has put on trees or street signs! All mysteriously moved!!! . . . # dirtytricks.” When will the madness end? 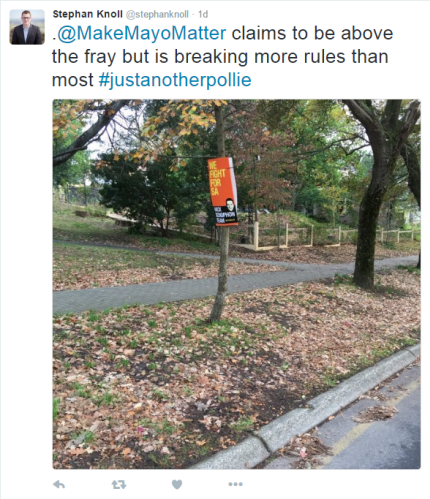 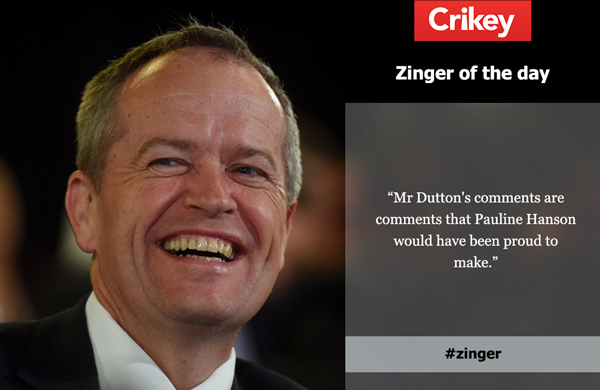 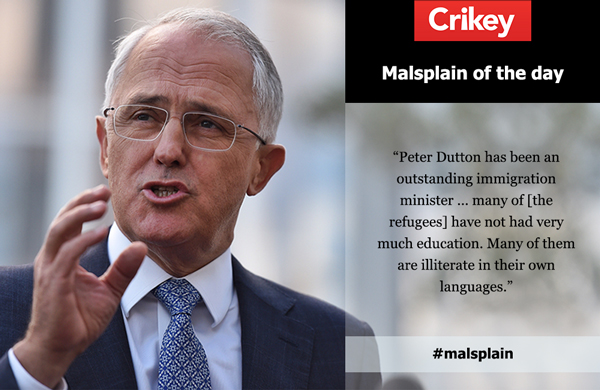 The $2.3 million Northcote house that David Feeney forgot about is apparently home to some Greens-voting tenants … 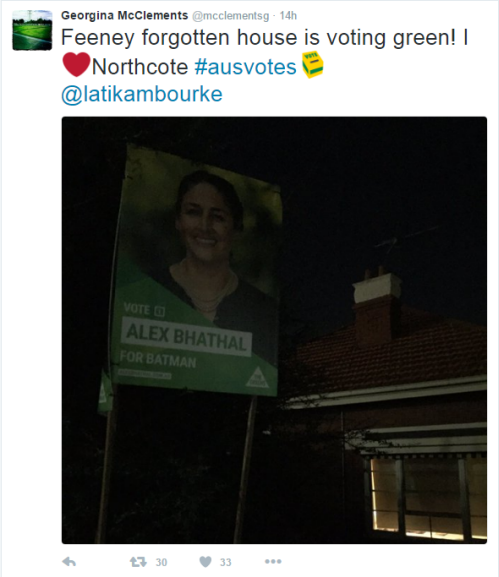 Capitol Hill was alive with music yesterday; Bill Shorten was serenaded with a rendition of Unchained Melody in Sydney … 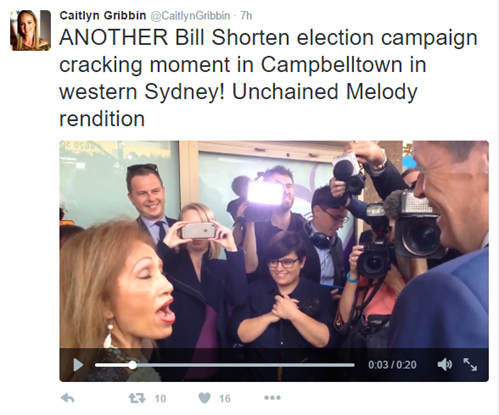 And after the PM held press conferences on three boats in as many days, the ABC’s Nic Vever’s put together this tribute to The Lonely Island’s I’m On A Boat.

The PM’s defence of the Immigration Minister’s scaremongering about refugees (who are going to simultaneously take our jobs and languish in unemployment queues) had many pundits waxing lyrical about Schroedinger’s cat yesterday; at least we have Tony Windsor’s dog to distract us … 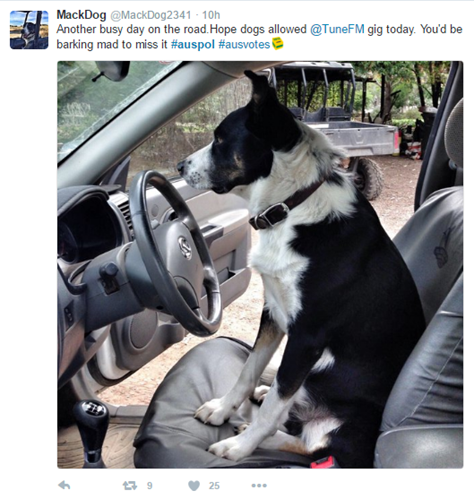 Bernard, all is good in my state of mind, but the guys in the parties competing for election have all landed themselves in a 44 gallon drum of worms (not a can of worms). This is partly Mal’s doing by creating the DD, ABCC, Top Hat election, but most importantly it has allowed the precipitation of all the warts and ingrown hairs of all the incompetent politicians that think they can govern handsomely to be exposed. They are all deluded and living in desire realm. They should meditate on the now and be more in the moment. I am disgusted and disillusioned with this crap. This election has turned into a turd that wont budge due to a lack of fibre and a turd that wont flush due to a non operational bile duct.

That’s, Joshua. all is good…