David Leyonhjelm misused parliamentary footage in an ad. What now?

The Senator has been asked to take down his ads featuring footage of Parliament, but he's doubling down instead.

It will fall to the Senate itself to censure David Leyonhjelm for using footage from Parliament in an election ad. And given its divisions, perhaps it’s understandable the Liberal Democratic Senator isn’t quaking yet.

On Tuesday, the usher of the black rod (who enforces Senate rules) informed Leyonhjelm that his ad — featuring clips from the budget speeches of former treasurers Wayne Swan and Joe Hockey, and current Treasurer Scott Morrision — would have to come down. This followed a complaint from Liberal Party director Tony Nutt. 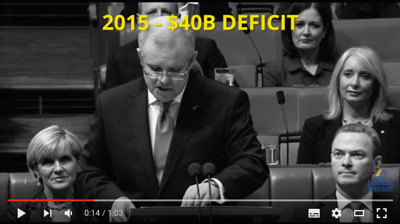 The Liberal Democratic ad with parliamentary footage (click to view)

Leyonhjelm isn’t obliging. In a response posted to YouTube this morning (title: Tony Nutt Has No Balls!), the Senator says he has “bad news for Tony Nutt”:

“We are not pulling down our ad. In fact, I’ve just authorised an additional TV buy to blanket the airwaves.”

The ad is currently airing on Sky News. The Liberal Democrats have also responded by posting up a now deleted ad they say appeared on the Liberal Party Facebook page, which also used footage from the House of Representatives to demonstrate the Liberals’ repeated insistence there would be no new taxes on superannuation. 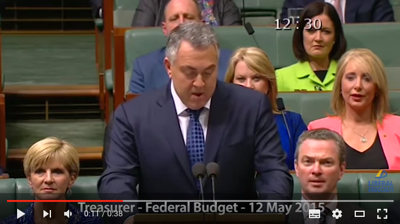 The rules banning the use of footage from Parliament in political advertising is contained in the parliamentary standing orders. The House of Representative standing orders state:

“Broadcast material shall be used only for the purposes of fair and accurate reports of proceedings, and shall not be used for:

(i) party political advertising or election campaigns; or

The usual punishment for breaking standing orders is to be ejected (“suspended”) from Parliament for a period of time. Though there are other possible repercussions. It’s possible, with a majority of senators, for a Senator to be sent to jail for breaking the standing orders. This was discussed last month when Liberal Senator Arthur Sinodinos refused to appear before a Senate committee investigating political donations. Needless to say, not much has happened — the committee was seen as highly political to begin with, and slammed by some of the crossbench as a “witch hunt”, which isn’t the best basis on which to secure a majority to impose a sanction.

“That’s pretty much the situation we’re in,” Leyonhjelm told Crikey. “For them to sanction us, they would have to convince a majority of senators we’d done something deserving of sanction.

“The Liberal Party is angry we’ve used their own words against them. That’s exactly what we’ve done. The media is allowed to report what they’ve said, everyone is entitled to watch videos, but apparently we’re not allowed to repeat in a political context.

Parliament carefully controls the extent to which vision of its proceedings can be used. In 2012, a ban on using footage from the House of Representatives for the purposes of satire was relaxed (though a ban on altering images taken in Parliament was brought in). Though even today, only authorised photographers are allowed to take images.

In the Senate, the photography rules are the most bizarre. Senators can be photographed, but only when they’re standing at the podium speaking. Otherwise, it’s a photography-free zone, even though it is televised.

Asked about the Senate photography rules, Leyonhjelm says it’s a slightly different issue. Personally, he’s not sure why people are opposed to photography.

“Though there are issues. The Senate is really warm, it’s boring as hell … it’s very tempting sometimes to sit back and close your eyes.

“I think that’s probably what motivates people to oppose photography. They don’t want to be caught napping.”

Myriam!
It is impossible to “double down”, you can double up no problems.
Tony

But there was this…. http://www.cbsnews.com/news/kfcs-double-down-sandwich-smart-marketing-and-not-as-gross-as-youd-think/

Tony Foot-in-Mouth!
‘Double down’ isn’t a numerical/size metaphor, it’s a spatial one: it means to put double your money ‘down on the table’: to increase the risk you are taking (by doubling your stake), in order potentially to reap a bigger reward. It’s a blackjack term that’s become a widely-used metaphor for anyone doing similar to what, for example, Senator Fake-Libertarian is doing here: increasing the stake he’s put on the table, because it will affect the risk-benefit analysis his opponent(s) conducts, even though nothing else has changed.

When your political execution is scheduled for 2 July, I guess you can afford to break a few rules.

Just signed up for a trial to Crikey because I was keen to read this “article”. Is 85 words what counts for an article these days? Perhaps the Crikey readership has a very short attention span?

It’s longer than that – try refreshing?

Thanks Myriam – can’t seem to get it display. Must be operator error 🙂

Don’t happen to use an ad-blocker do you? I can’t see the full articles on my iPhone using Purity.
(Given how little online advertising allegedly earns publishers I wish subscribers could be spared the visual pollution)

If I “reload without content blockers” on Mobile Safari it works. Thanks for the heads up.

Hi Andy – have you clicked the link in the activation email that was sent to you? If you’re still having problems this morning, email me on [email protected] and I will sort it out.

Hey Sophie,
I had and also tried different browsers both here in the office and at home. Myriam was kind enough to email me a copy of the article. Just came to see if there were any changes, and it’s now displaying the full article. Thanks for the help, and apologies for hijacking the chat on this interesting piece by Myriam with tech support!