News organisations are questioning why they bother sending a press pack at all.

On the campaign trail, Malcolm Turnbull avoided answering further questions from the press pack this morning about comments made by one of his ministers by saying the current event was for local reporters:

“We are going to do have another doorstop in Townsville and this is really for the local Cairns media. Any more questions from Cairns?”

The suggestion that national media couldn’t question him didn’t go down well with the press pack. Media organisations have to fund their own way to follow the leaders on the campaign trial. With events decided on at the last minute, it’s hard for them to control or budget for the costs. While it is possible to cover the election from a TV set, this relies to an extent on piggybacking off the work of those who pay up to actually follow the leaders around. For those who want to film it or ask questions, it’s an expensive proposition. And Malcolm Turnbull has in his first week on the trail criss-crossed the country to pop in at major cities, costing media organisations a lot of money, while Shorten has kept a more leisurely pace, spending several days in north Queensland.

Still, balancing the needs of local and national press can be difficult, with the national press often crowding out those who want to ask about local issues. AAP Darwin reporter Neda Vanovac says the local press weren’t even told of media events yesterday … 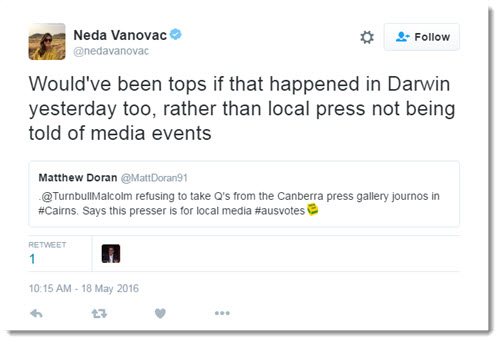 RBA review not about taking shots at Lowe