Another week grinds on in the campaign, as the media turns on an undeserving victim.

The media so far are doing a pretty good job of giving the major party leaders even time, with Prime Minister Malcolm Turnbull only about 15% in front of Opposition Leader Bill Shorten in volume of coverage. Print and broadcast are keeping politics pretty high on the page and in the bulletin, but most online news outlets have quickly relegated the election to a long way down the home page, as the broader lack of interest in the campaign keeps them focused on sport and reality TV.

Meanwhile, what is a state premier doing in the top five in the middle of a federal election campaign? Well, that would be Mike Baird and his council amalgamations, which are getting strong criticism from both left and right (as amalgamations always do), with some media claiming it could cost Turnbull a few seats in what is seen as his main redoubt of NSW. The other premier up the list was WA’s Colin Barnett, after bringing down a budget deep in deficit as the WA economy struggles to cope with the post-mining boom landscape.

Foreign Minister Julie Bishop was the other big mover into the top ten, as she escorted the PM through her home state and defended Immigration Minister Peter Dutton’s comments on asylum seeker literacy and numeracy skills. And finally, as courageously predicted by this column (although I admit, the odds weren’t exactly Leicester-like) Family First Senator Bob Day failed in his High Court bid to have the senate voting reforms declared unconstitutional. Better hit the campaign trail Bob! 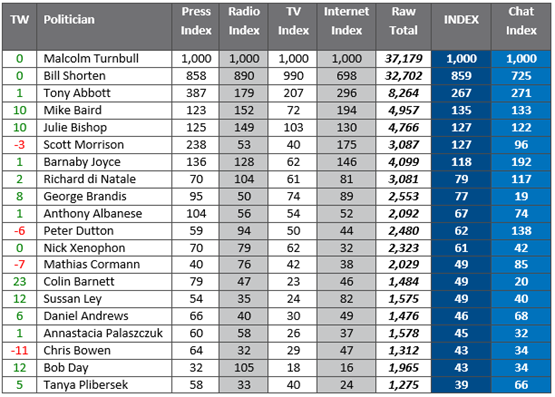 He may be nowhere near the top five in the news media, despite all the hoo-ha about deals and preferences, but Greens leader Richard Di Natale snuck into the social media top five, with far more favourable comments overall than the two gentlemen above him on the list.

Talkback continues to be a not particularly friendly place for Malcolm Turnbull, although volumes remain at non-campaign levels so far.

Can we perhaps stop for a moment and long for that golden time when someone could ask a question in a public forum and not then have every detail of their life raked over, or money thrown at them that they didn’t ask for, as if that solves the issue? 15 seconds of fame for everybody does not a stronger community make.