Crikey Campaign Scorecard: my infrastructure’s bigger than yours!

Bernard Keane, Crikey politics editor: The government got away, mostly, with its clumsy deferral of the backpacker tax — better a morning of humiliation than the issue dragging on for weeks. Then it shifted gear to go on all-out attack over asylum seekers, and as long as the Coalition can keep that issue dominating the campaign agenda, they’ll be winning. Fairfax’s revelation about David Feeney’s convenient memory lapse about his house came too late to do any harm to Labor, but that will play out over the course of the day — assuming it doesn’t get overtaken by other, more refugee-related events. Even so, a win for the Coalition.

Simon Breheny, director of Policy at the Institute of Public Affairs: A messy day for both sides yesterday — the Coalition on the backpacker tax, and Labor on excessive penalty rates. Surprisingly, the Greens appear to be taking a stronger free-market approach to the backpacker tax than the Coalition. Richard Di Natale wants it scrapped immediately; the Coalition says it will defer the decision until after the election. Yesterday revealed the huge problems Labor has on penalty rates. The unions want them kept but a decision of the Fair Work Commission expected after the election may see Sunday rates brought into line with Saturday rates — an eminently sensible idea. Labor says it will “intervene” to “protect” penalty rates. But that it will also accept the decision of the government agency Labor set up to make these decisions. And this is after stacking the commission with its union mates. The ALP is hopelessly conflicted on this. With the disclosure of Feeney’s negatively geared $2.3 million property the day ended up being a huge loss for Bill Shorten and Labor.

Dr Zareh Ghazarian, political scientist at Monash University and author: Malcolm Turnbull, despite being more likeable according to the polls, seems to have plateaued. Bill Shorten won the day — promising opinion poll data and the seemingly chance encounter with the well wisher who sought a “proper kiss” seems to have given greater momentum to his campaign. Still, it’s the start of week two and questions remain if people are tuning into the campaign yet.

Kate Mills, journalist and CEO at ProfessionalMums.net: In the run-up to the election the most important thing is to avoid scoring own goals, as in the fevered pre-election phase it’s actually surprisingly easy for a side to scupper its own chances without the other side really having to do much. In the end, despite Labor inflicting a few punches on itself by shilly-shallying over its position on penalty rates, the Liberals scored the biggest own goal by backing down on the proposed backpacker tax. This was thanks to revolt in the ranks of the Nationals due to its representation of rural areas where backpackers are a critical source of seasonal labor. To be fair, it did seem silly that at a time when the country is relying on education and tourism to pull the economy out of its post-mining slump to send a message to backpackers that they will be paying more tax in Australia.

Both sides forked out for infrastructure projects today, and it seems everybody loves a good freight rail project. Turnbull pushed his message in north Queensland while Shorten focused on Sydney. 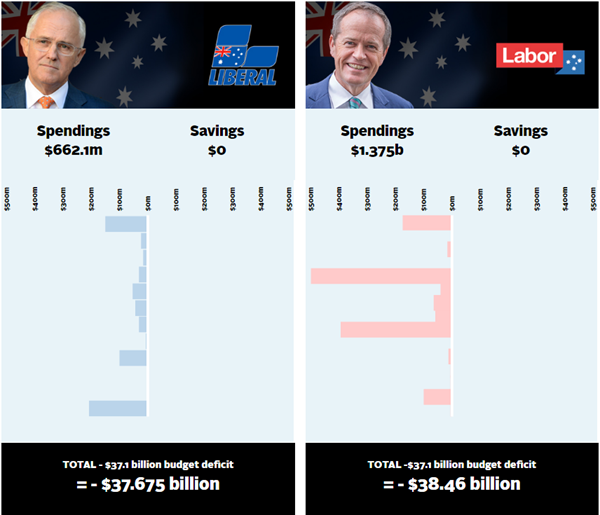 Malcolm Turnbull: It’s back to Queensland for the Prime Minister, who wants to talk up the government’s infrastructure credentials. He spent the morning in the Cairns seat of Leichhardt, where he announced funding to support the local marine precinct. Then it was a short trip down the highway to Townsville and the marginal seat of Herbert, currently held by the coalition’s Ewen Jones, to announce funding for a new freight rail line.

Bill Shorten: The Opposition Leader spent the day in Sydney where he tried to put Labor’s infrastructure plans at the top of the agenda, he pledged funding for a new freight rail line to ease traffic congestion on the roads. Then he stepped up to take a swing at Peter Dutton and express his “displeasure” at David Feeney.

The Greens: Greens Leader Senator Richard Di Natale teamed up with Greens Senator for Victoria Janet Rice to pump up innovation in the auto industry. They held a press conference to launch a new policy to accelerate the development of electric vehicles in Sydney, ahead of Di Natale’s keynote speech at the International Society for the Study of Drug Policy Conference this afternoon.

Immigration Minister Peter Dutton has managed to use a 30-second comment to blame refugees, the Greens, Labor and the CFMEU for unemployment, welfare issues, low literacy rates and increased pressure on Medicare. Dutton was responding to the suggestion from the Greens that Australia’s refugee intake be increased to 50,000. Asked by Sky News’ Paul Murray about the impact this would have on employment, Dutton didn’t hold back, suggesting that “illiterate and innumerate” refugees would be taking Australian jobs. Labor and the Greens have called for Dutton to apologise, but Dutton definitely also had plenty of support on this issue: 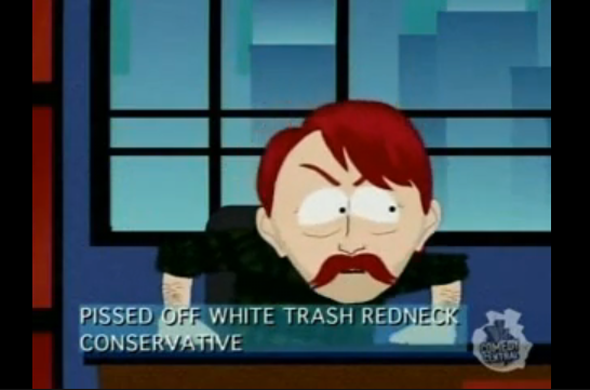 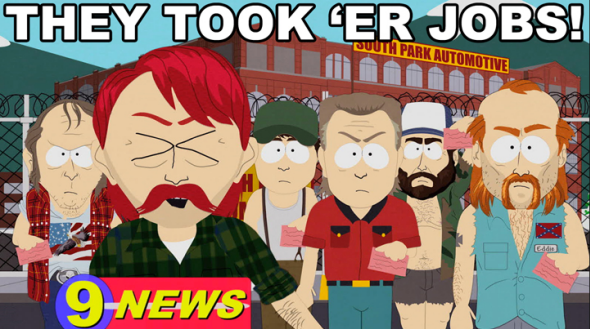 Labor frontbencher David Feeney has failed to declare a $2.3 million house he owns in Northcote. The member for Batman fended off criticism that he was out of touch with his electorate since he didn’t live there by informing the media that he was simply waiting to move into his very own Northcote Batcave. Turns out he actually threw himself under the Batmobile after a touch of research revealed that the property hasn’t been declared on the Register of Members interests, which places him at risk of being found in “serious contempt” of Parliament. He also claimed he didn’t know if the property was negatively geared or not. Turns out it was … Surprise, surprise.

Sniping? This is becoming an ambush. Bill Shorten’s candidates are lining up like a firing squad with rocket launchers to take him down. The count now stands at 21 rogue MPs who have publicly expressed concern about the “United Labor Team’s” policy on offshore processing. Not exactly the 21-gun salute Bill Shorten would have hoped for. Labor’s candidate for the Sydney seat of Bradfield, Katie Gompertz has previously used Facebook to attack what she describes as Australia’s “disastrous obsession with stopping the boats” and criticise Australia’s policy of offshore processing. 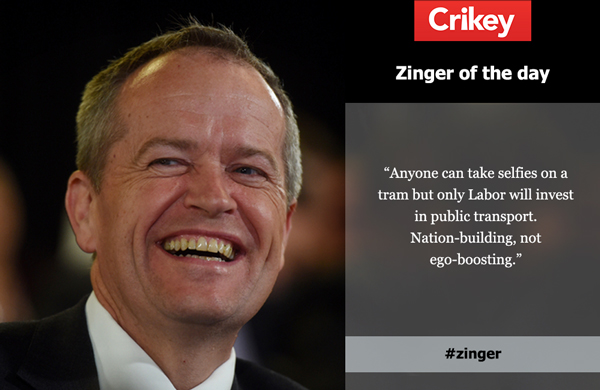 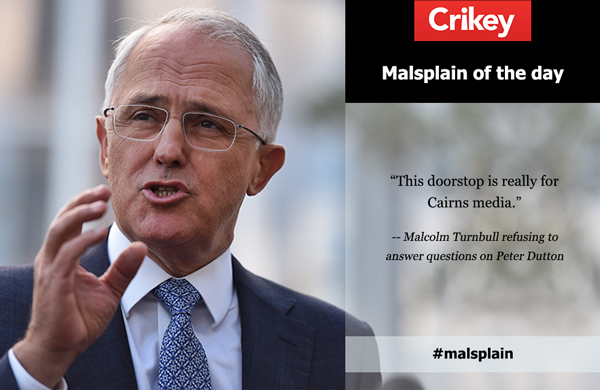 KISSING BABIES AND OTHER CAMPAIGN CLICHES

Ever felt sorry for the poor little babies that get thrust into politicians’ hands and kissed in front of gawking onlookers and flashing cameras? Well, looks like it goes both ways. Poor old Bill Shorten met a besotted fan, Margot Casey, who told him she wanted a “kiss and a cuddle” and she wasn’t taking no for an answer. 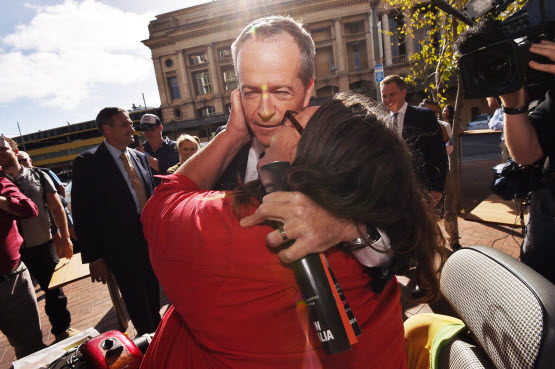 Tony Abbott is working hard to achieve internet fame by becoming a meme. He stopped by the Liberal Victoria campaign HQ to lend a hand. 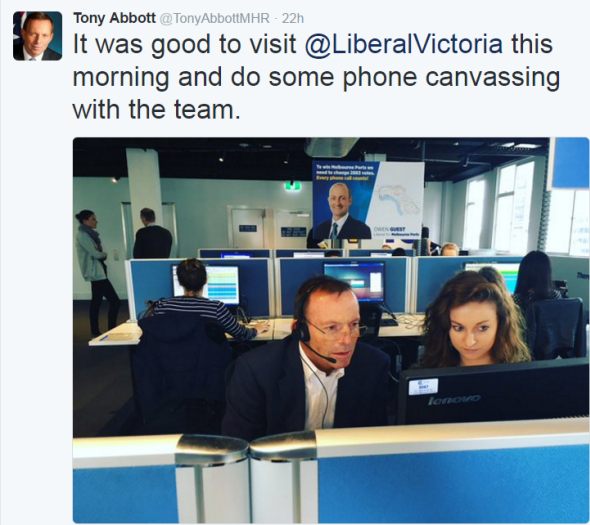 Social media decided to have a bit of fun, and the results were about as kind as could be expected. 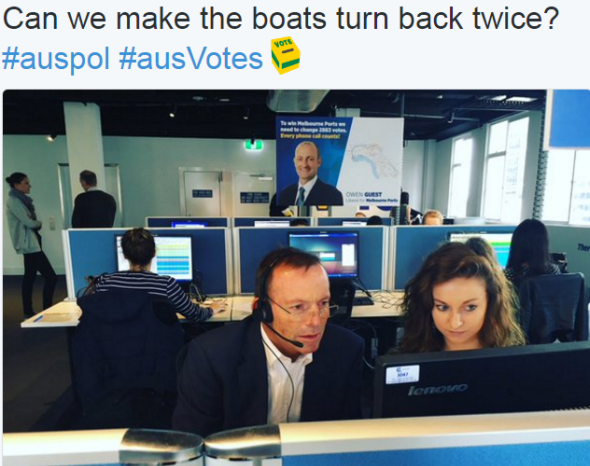 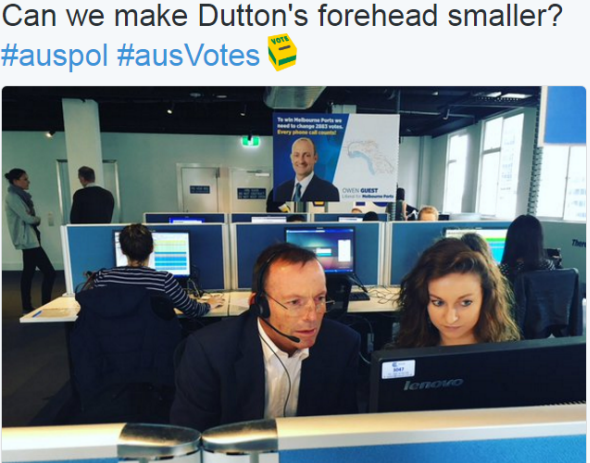 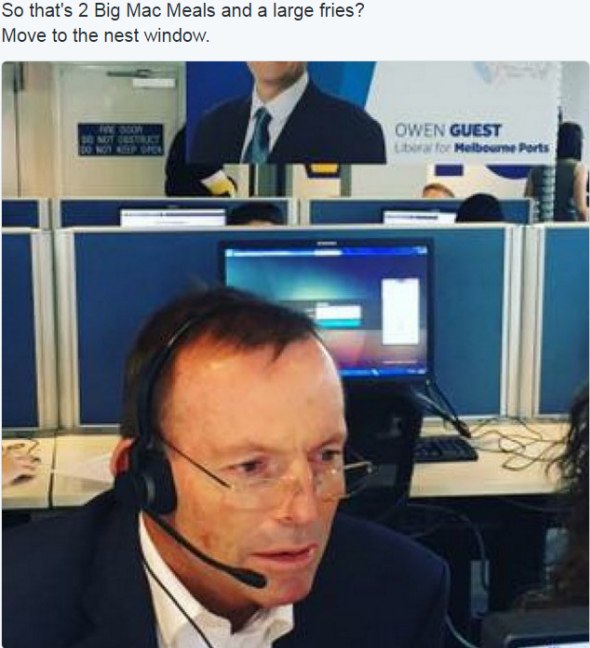 The Greens are having a gay old time in Victoria as they attempt to win the inner-city seats of Batman and Higgins and return Adam Bandt to the seat of Melbourne. They’re using the gay hook-up smartphone app Grindr to target voters after the tactic proved successful in the 2014 Victorian election. To be clear, they’re inserting ads into the app to promote their candidates to users. Now that’s a bit more exciting than doorknocking.

The prize today goes to Crikey alum Matthew Knott, who was understandably annoyed that Malcolm Turnbull insisted on limiting questions to local journalists during his Cairns press conference.

Both the major parties are pledging money for infrastructure, Turnbull in Queensland, Shorten in Sydney. The Greens are canvassing gay votes and launching electric cars.

Speaking of illiterate and innumerate and just downright pointless, why is Dutton still an elected representative? Queensland, take a look at yourselves. You are the guys who elected Dutton (redneck) and Coibo (bogan in a suit). Both these people have wasted and abused your trust in them for nothing but personal power. You can do much better than this.