David Feeney's disclosure ... where in the world is Sarah Hanson-Young? ... Nats tilt at Indi ...

David Feeney’s tricky disclosure history. Labor frontbencher David Feeney is in hot water over his undeclared $2.3 million Northcote house, revealed by Fairfax yesterday. Members and senators are required to update their register of pecuniary interests within 28 days of any changes. Some MPs, who seem to get continual free tickets to sports events, have interest registers that run for tens of pages, but Feeney’s declaration has only been updated twice since the 2013 election. So what does he remember, if he forgot to declare a house?

In April last year, Feeney declared two model boats, worth $4000 each, given by ship-building company Austal. He also declared a trip to Papua New Guinea in August last year, sponsored by Save the Children. Apart from the original declaration, which includes his house in East Melbourne an investment property in up-and-coming suburb Seddon, there’s very little to report. The excuse that he forgot won’t pass muster, especially with the added news that the house is negatively geared. To add to the bad optics, Feeney doesn’t live in his electorate of Batman, which is under concerted attack by the Greens, but in nearby Melbourne — held by the Greens’ only MP, Adam Bandt.

Where’s Sarah Hanson-Young? The Greens are fighting to hold onto their two Senate seats in South Australia, with the popularity of Nick Xenophon putting the chances of senators Sarah Hanson-Young and Robert Simms in jeopardy. A tipster wondered why Hanson-Young wasn’t campaigning in South Australia but could often be seen on Sky News — from the network’s Melbourne studios. Hanson-Young has been in Melbourne promoting the documentary Chasing Asylum, showing as part of the Human Rights Arts and Film Festival. The film includes never-before-seen footage of inside Australia’s offshore detention camps — and Hanson-Young was at the Adelaide premiere last night. We also hear that the Greens will soon bring out both the party’s former leaders — Bob Brown and Christine Milne — as part of the campaign across the country.

Of all the houses, in all the streets, you had to walk into mine. Former Liberal MP Dennis Jensen has had a week of ups and downs, according to a rumour on Perth’s 6PR radio station. According to the program’s Rumour File segment, Jensen, who is now running as an independent for the seat of Tangney, got engaged to his partner Trudy Hoad over the weekend, and she has been helping him with the campaign effort. The Liberals dumped Jensen after it was revealed that he had pitched a supposedly “racy” novel to publishers using his parliamentary letterhead. Passages of the book were also published, leading to a landslide of votes against him from Liberal preselectors. This hasn’t blunted Jensen’s enthusiasm for serving the people of Tangney in WA, doorknocking for his campaign effort to run as an independent. According to 6PR, Jensen and Hoad knocked on one particular door and got through five minutes of their spiel until the lady of the house let them know exactly who she was: the wife of Ben Morton, the former Liberal Party state director who beat Jensen in preselection for the seat. According to the email, they “picked up their campaign materials and scurried for the road”.

Nationals’ Indi hope has a history. All eyes are on the Victorian seat of Indi today, after an ABC 7.30 profile of the electorate revealed that Sophie Mirabella thought fellow Liberal Party members had leaked against her. Libbi Gorr’s story, which included her asking Sophie Mirabella how she felt about being labelled a “bitch”, profiled just Mirabella and local independent MP Cathy McGowan, who wrangled the seat off Mirabella in 2013. The other major candidate in the race (mainly from where his preferences will flow) is the Nationals’ Marty Corboy, who appeared alongside Deputy Prime Minister Barnaby Joyce today. 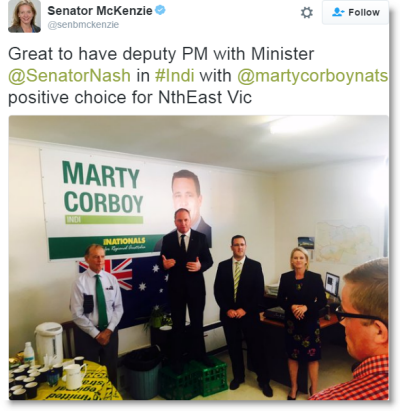 Corboy has run for preselection for the Nationals before, in the Victorian state seat of Euroa, at the 2014 election, and he also sought Nats preselection for Murray Valley in 2010. He hasn’t always been a National, though — he ran for the seat of Benambra for the Family First party in 2006.

In a profile in The Guardian today, Corboy acknowledged that he is running against two women, saying: “Without sounding sexist, some people are rapt to have a man to vote for.

Tony Abbott chased out of everywhere

Van Badham to the rescue of stricken comrade Feeney

Feeney one of these Labor sheep-dogs – prepared to climb over the backs of the rest of the flock to get to the front.
Go ‘Greens Pest Control’.

“Without sounding sexist, some people are rapt to have a man to vote for.”

Without sounding unkind, some people are apt to deduce Corboy is a hayseed. He and Cousin Jethro complement each other.