“It drives Australian technology, it drives advanced manufacturing and all of the spin-offs that comes from that. You see, the defence industry operates at the very frontier of innovation and technology and so it serves to pull the rest of the economy along in that regard. There’s a lot of spin-off benefits.”

But how are the French talking about the submarine deal? This week’s Economist covers the boom in French military exports, quoting someone who worked on the deal characterising the Australian jobs as nothing more than “steel bashing”:

“More substantial was the decision by Australia’s government, late in April, to award DCNS, France’s naval shipbuilding firm, a huge tender to replace its ageing fleet of submarines with 12 Shortfin Barracuda A1 boats. The firm, founded in 1631, pushed aside rivals from Japan and Germany, nabbing a contract worth A$50 billion ($37 billion) over several decades. Much of the “steel bashing” will happen in South Australia, concedes one man who helped to lead the bid, but “hundreds” of high-end jobs for French designers, instructors, engineers and others are now secured in places like Cherbourg. Thales, a hefty defence-electronics firm, expects to provide the sonar system for the submarines, at roughly 100m euro a boat.”

So are the French getting the jobs of the 21st century or are we …?

ABC connects with the yoof. This election has been called the “Snapchat election”, with many politicians and political parties getting on the social media app as a way to interact directly with young voters. Snapchat, for those who don’t know, is a photo messaging app in which the photos sent to contacts disappear within 10 seconds. Users also have the ability to upload pictures and videos to their “story”, which can be viewed for 24 hours, and news agencies now have the option to publish stories specifically for the app. In an email to staff this morning, the ABC’s managing director of news digital, Stuart Watt, said the ABC was recruiting for reporters to use Snapchat to cover the federal election. The email said:

“Successful applicants will be given training and instruction in best practice for use of Snapchat in an ABC News context. We anticipate sending these reporters to cover a handful of identified campaign events.”

Who says tech has a women problem? The tech sector is in the process of launching a new industry body called TechSydney and dutifully received a glowing write-up from The Australian Financial Review today. As Crikey has reported at length recently, the tech sector, and particularly the Australian community, is a vast sausage-fest that is actively hostile to women. In case you’re wondering, have a look at the picture accompanying the article: 21 men, one woman … 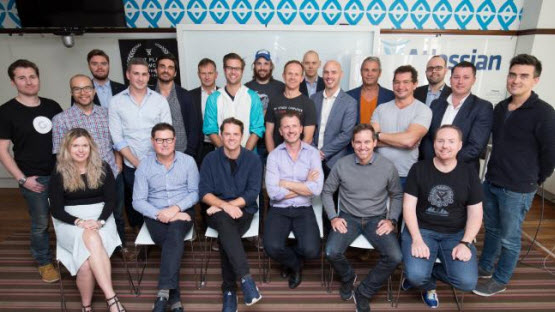 And the woman is Karen Doherty, who was there representing University of Technology, Sydney, not as a tech entrepreneur or executive. Oh, and the hosts were “Brolassian”, a company with a shocking record of employing women. As we found when we spoke to people in tech for our series, there are plenty of outstanding women in the local sector — but apparently these dudes couldn’t find a single female entrepreneur or investor to participate in their lobby group.

Comings and goings at the AFP. Australian Federal Police assistant commissioner Kevin Zuccato quietly finished up at the AFP last Friday. Zuccato was national manager, support capability, with a distinguished career in drugs enforcement and cybercrime, including a five-year stint as director of the Australian High Tech Crime Centre. At age 49, he seems a little young to be retiring, but that was the word AFP Media used to describe his departure.

Quite the sense of self, Barnaby. Deputy Prime Minister Barnaby Joyce is fighting to keep his seat in Parliament, with independent Tony Windsor giving him a run for his electorate, so it’s not surprising he’s trying to be increase his profile with voters. In a press release this morning, Joyce used the term “the Turnbull-Joyce government”:

“The Turnbull-Joyce Government has listened to industry concerns about possible labour shortages resulting from the 1 July 2016 application of the non-permanent resident tax rate to backpackers, and has agreed to review the tax, Deputy Prime Minister and Minister for Agriculture and Water Resources Barnaby Joyce said today.”

It will help the Nationals’ standing with farmers who need seasonal workers to pick fruit, but it seems Turnbull hasn’t got the branding message: his logo makes no reference to Joyce — just the “Turnbull Coalition government”. One tipster has also received the logo reading the “Turnbull Liberal government”. We’re sure Barnaby has a new logo ready for Turnbull …

Freedom Boy’s new digs. Liberal candidate for Goldstein Tim Wilson knows recognition helps a candidate. Despite having a high profile already, through his Human Rights Commission history, he has the most decked-out campaign office we have seen … 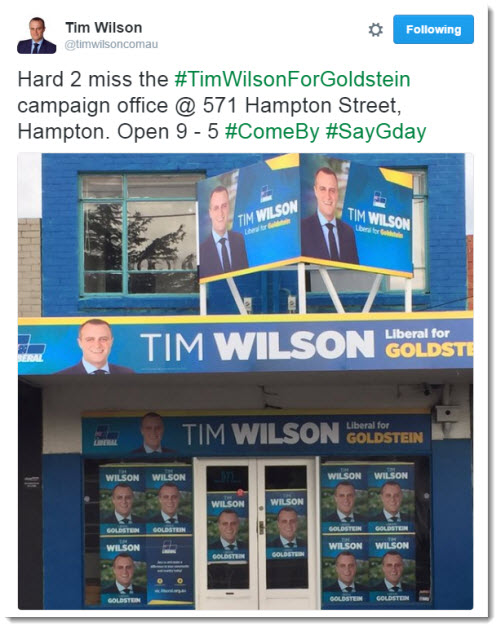 P-E-T-E-R and Andrew helping. Remember when Tony Abbott said Peta Credlin would be treated differently if her name was “Peter”, not “Peta”? It looks like The Bolt Report got the memo … 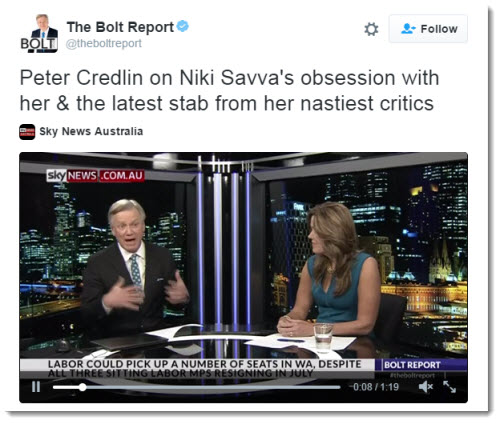 Although with Credlin’s helpful comments over the past few days, we think there would be headlines no matter how her name was spelled.

The Crikey Commissariat decades back refused to accept articles suggesting how major sections of the Car Industry could be helped, so it’s hardly surprising they don’t seem to understand far more demanding matters such as submarine construction.
To think subscribers’ fees are so wantonly wasted.
That’s quite apart from what spent on their blinkered Censorship Team.

Poor gNormless, his brilliant article ‘spurned by the Kommissariat decades back…’ – he must have upgraded his time machine.

As an Australian Software Engineer with 10 years in the industry, I feel like Crikey is continually getting it wrong with its simplistic depiction of an industry ‘actively hostile to women.’ Go to any university computer science course, look at the gender demographics. Go to any high school senior computer class, go to any video game store. Count the males, count the females. I read it here, and I read it in the series mentioned, to say that the lack of female representation in the tech workforce, on boards, and in management is simply down to sexist grounds and a ‘bro’ culture is disingenuous. There is simply less females choosing tech at an early age – and that’s more a societal issue than anything. Yes TechSydney could of chose a less male dominated group, but the simplistic, borderline bitchy tone and position Crikey is continually taking in regards to females in tech is far below the level of commentary I like to believe I’m paying for.

Crikey, you got Peta Credlin’s name wrong yourselves in Friday’s ‘Campaign Scorecard’, and haven’t corrected it. Are you guys reading Bolt’s output more carefully than your own?