Malcolm Turnbull continues to let voters down, but the Coalition's position isn't getting any worse, today's Essential poll shows.

Labor retains a narrow 51%-49% two-party preferred lead in today’s Essential Report poll, enough to deliver the tiniest of majorities if it were reproduced on a national basis on July 2. And PM Malcolm Turnbull has continued his decline in the eyes of voters.

For the first time, the Prime Minister has a net negative approval rating, with 40% of voters approving of his performance and 42% disapproving. Turnbull’s problems with voters began around March, when voters appeared to run out of patience with him and began souring on him. 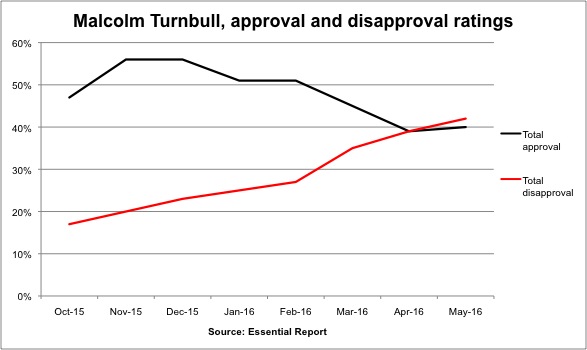 Opposition Leader Bill Shorten, on the other hand, has continued his steady, but slow, improvement in the eyes of voters. His approval level is up four points to 34%, while his disapproval rating is 43%, about the same as in April (44%).

The Prime Minister, however, still holds a generous 15-point lead as preferred prime minister, 43%-28%, but that too has come down, from 44%-22% in April. And a persistent feature of the approval responses — that Shorten had a significantly higher disapproval rating among Labor voters than Turnbull had among Coalition voters — has vanished entirely. Now, more Coalition voters disapprove of Turnbull (17%) than Labor voters who disapprove of Shorten (15%).

On voting intention, the Coalition remains on 42% and Labor on 38%, while the Greens are down a point to 9%. The Nick Xenophon Team is polling 3% nationally, but the primary focus of the Xenophon campaign is on South Australia and, to a lesser extent, Victoria. Labor’s lead on a uniform national basis would deliver Labor 21 seats, barely enough to form a government in its own right. The good news for the government is that the recent momentum against it on the two-party preferred basis has clearly stopped, setting the stage, perhaps, for a comeback over the next seven weeks. 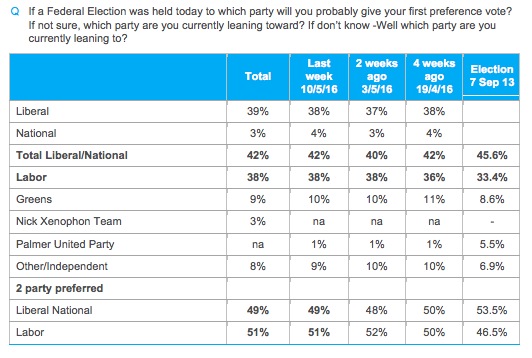 If they’re divided on party support and leaders, other things unite voters: more than half (52%) think Turnbull’s epic eight-week election campaign is too long, while 32% think the length is “about right” (5% are gluttons for punishment and think it’s too short). And 30% of voters say they will look at more news and commentary during the election campaign. However, 21% say they’re not interested in politics and won’t be paying any more attention than usual, and another 13% say they can’t stand it and will be ignoring it. 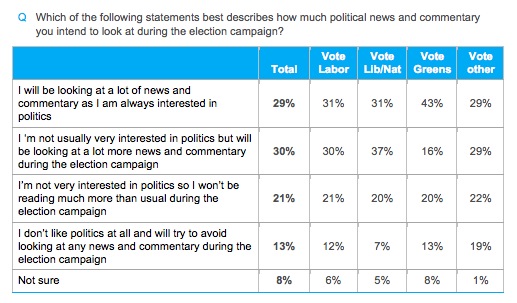 Essential also asked about perceptions of class in Australia. It found 81% of Australians believe social classes exist in Australia (79% said the same in 2014), with Greens voters (94%) more likely to believe class exists than Coalition voters (81%). Older voters are also more likely to believe class exists than younger voters. Voters are more likely to identify themselves as middle class (48%) than working class (34%), except if they earn less than $1000 a week, in which case they split 46% working class and 31% middle class, while no one wants to identify as upper class; 21% of people earning more than $2000 a week see themselves as working class.

The death of Homo Economicus: how neoliberalism fuelled the rise of identity politics

Malware had better invest in some brown trousers. The souffle can’t last another 5 weeks, and the Spiv Party has nothing else – hence the dredging for security scares (like stopping the boats leaving) and the Daily Telecrap’s desperate front pages. The Rupertarians are terrified.

And Malware? Couldn’t see this coming when he “liquidated” his vacant principles to lead this shambles …. sorry … Limited News Party?

Request for Bill’s wife – please sew up his trouser pockets.

Talcum is getting his just desserts at last…Bill is looking good!

gee Turnbull reminds me of Andrew Peacock of old. Suave,sophisticated and fake

The spiv is fucked.. Going back to Turnbull was like going back to an old flame after the worst relationship of your life (clownshoes) and then remembering why you split in the first place (dud root syndrome)..get the popcorn out and sit back and watch Mal get the full Campbell Newman.. I hope they have vaselined the base ball bats..