Labor steals the Coalition's thunder in a healthcare promise for the Northern Territory.

Bernard Keane, Crikey politics editor: A day when the issues obsessing insiders wouldn’t have connected with voters. Labor was all over the place on penalty rates, but the detail wouldn’t have mattered or filtered through to voters watching the evening news bulletins. Similarly, Prime Minister Malcolm Turnbull’s problems with that weird Fremantle Liberal candidate won’t matter a great deal — only to people who read newspapers, not the vast majority of voters. So call it even on the evening news imagery; on substance, a bad day for Labor, given penalty rates should be the sort of issue it owns.

Margo Kingston, journalist, author and commentator: I think Labor lost [yesterday]. It’s become crystal clear that Greens leader Richard Di Natale’s interventions on asylum seekers and now on penalty rates have put Opposition Leader Bill Shorten in a very difficult position. I think the stuff with Turnbull not having a candidate to campaign beside in Fremantle is just daily flimflam which will be forgotten, but the asylum seeker issue has the potential to become a real problem. If polling starts to show this, they may have to do something drastic.

John Connolly, founder of John Connolly and Partners public relations firm: After subs in Adelaide it was warships built from Australian steel for Oman in Perth. Then to the Lizard Bar in Darwin, where our PM must soon be announcing aircraft carriers built from Australian aluminium beer cans for Greater Timor. Meanwhile, our Opposition Leader was trying to resuscitate car manufacturing and wondering why anyone ever mentioned penalty rates. The NT News put it all in perspective with today’s front page story: “Two arrested in Dawn Weed Raid“. Hopefully this was not at the Lizard Bar. Labor running a much better campaign at the moment. Anyway, for must swinging voters this is all annoying background noise. How annoying? If you believe Gary Morgan, minority parties could control the Senate and the Greens and the Nick Xenophon Team could control the House of Representatives. A double dissolution backfire then.

Ben Eltham, national affairs correspondent for New Matilda and lecturer at Deakin University: The penalty rate issue has become a problem for Labor; sticking to the independent umpire line won’t work for them. But Turnbull also had some problems in Perth, so I’m calling it a dead heat. Nothing much has happened yet; both sides have had a slow start.

Labor and the Coalition scrambled to be the first to announce a PET scanner for Territorians yesterday; after MP Natasha Griggs told breakfast radio in Darwin that Turnbull was going to make the funding announcement, Labor health spokeswoman Catherine King changed the subject of an announcement (which was to be about Aboriginal health funding) and instead announced the $15 million for the scanner. Here’s what the NT News made of the announcement: 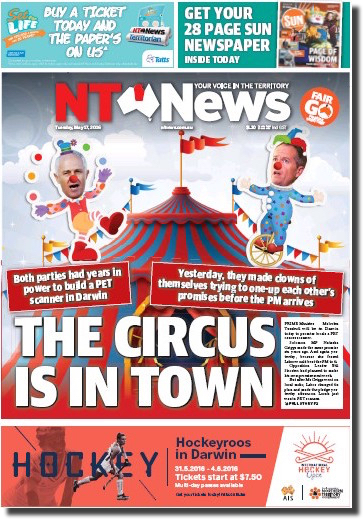 Meanwhile, in another show of one-upmanship Labor has announced $500 million for an Adelaide tram network, following the government’s commitment to a rail extension last week. Click on our interactive Cash Tracker for more … 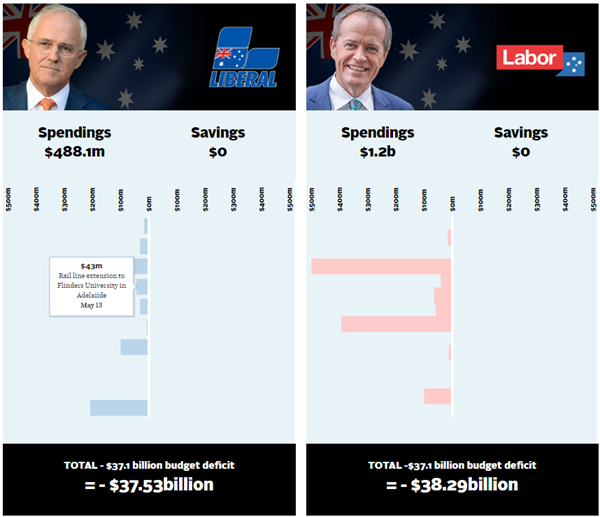 Malcolm Turnbull: Following a night in the pub last night, where the PM foreshadowed a backdown on the backpacker tax, Turnbull is today campaigning in Darwin. He started the day at a morning tea in the seat of Solomon, which Coalition MP Natasha Griggs holds on a margin of 1.4 %. Speaking to Territory FM he said he was impressed with Darwin’s waterfront and that developing the north was central to the government’s economic plan. Addressing reporters at East Arm Wharf, Turnbull focused on border protection; when asked about the leasing of Darwin’s port to Chinese interests, he said: “I can assure you all of those matters have been taken into account.”

Bill Shorten: The Opposition Leader is in the city of churches today, one-upping the government’s commitment to a rail link to Flinders University with a $500 million plan for a citywide tram network in Adelaide. The AdeLINK project will create 2000 jobs, according to Labor’s media release this morning. “Adelaide has faced the prospect of high unemployment and social dislocation after the Liberals goaded the car industry into closing down and leaving Australia. Critically, Labor’s support for this project will re-energise the local workforce and create 2000 jobs.” Speaking to Adelaide’s FIVEaa this morning, Shorten defended Labor’s policy on penalty rates: “The case hasn’t been made to slash penalty rates in this country. The best defense workers have is a strong independent umpire. That is the best protection.”

The Greens: The Greens launched a penalty rate campaign ad yesterday (set in an organic food shop, of all places) that contends that “only the Greens will protect penalty rates”. Richard Di Natale will today address the Lowy Institute, where he is expected to discuss the government’s failure to adequately address climate change. He will also criticise Australia’s bid to join the UN Human Rights Council on the grounds of Australia’s own human rights violations and will also advocate for an increase in foreign aid. Di Natale will be dressing himself for the event … 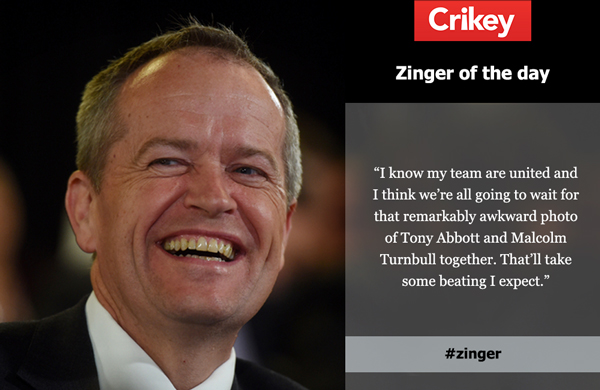 And speaking of zingers, Fairfax’s Alex Ellinghausen caught this perfect moment on camera … 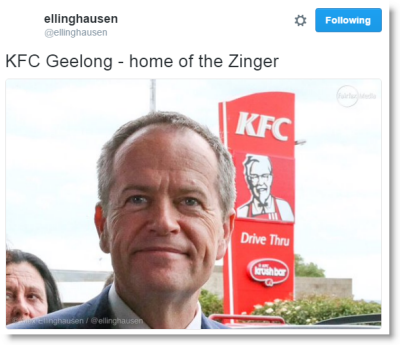 Peta Credlin was at it again yesterday, and it made for “riveting viewing”. Commenting on the fact that Turnbull failed to campaign alongside the candidate for Fremantle, Sherry Sufi, Credlin said this on The Bolt Report: “I think once in a while the candidate not being at a press conference in an electorate is fair enough, in isolation, fair enough. When it becomes a pattern, the pattern becomes a problem, and particularly the seat of Boothby and Dunkley, where he did not have the candidates, Nicole Flint in Boothby and Chris Crewther in Dunkley, I think was a mistake, they’re seats we hold, we’ve got retiring 20-year members going, and anything you can do to boost name recognition is important.”

Meanwhile in the seat of  Indi, Sophie Mirabella was crying foul on 7:30 last night suggesting a story in The Australian –“Mirabella: she’s cooked” — might have come from her own camp: “If you show me the name of the journalist I might be able to point you in the right direction. You can usually guess it 90% of the time. What do they say? If you want a friend in politics, get a dog.” We helpfully point out to Mirabella that the journalist’s name, Victorian editor John Ferguson, is on the story.

Speaking to Sky News on Sunday night the ex-PM threw a shirtfront Putin’s way while graciously conceding Eurovison defeat to the Ukranians: “I think the Ukraine has suffered a lot over the last couple of decades and I think they’re currently suffering at the hands of a bully. So if this helps their morale I think we should be prepared to accept second place.” Yesterday he was campaigning in Middle Head … 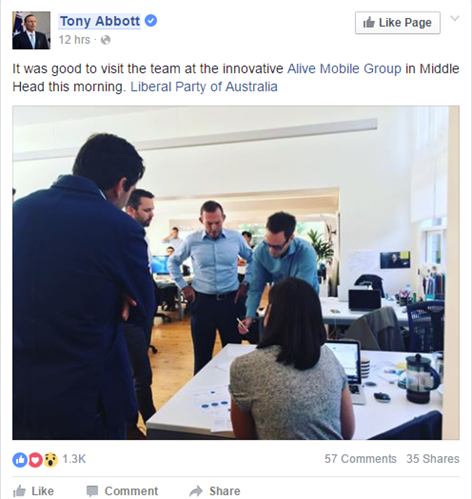 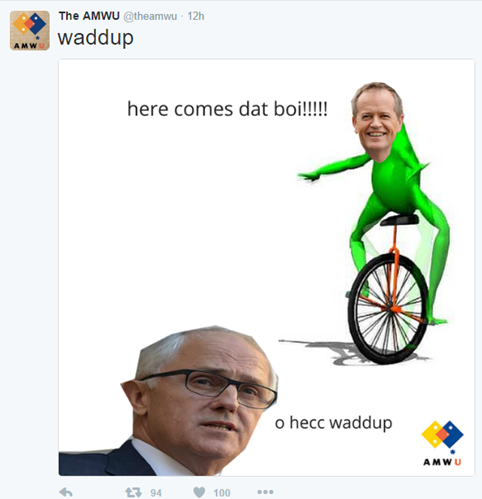 The wheels have come off Labor’s campaign, they’ve hit a bump in the road [insert bus-related metaphor]. Shorten’s campaign bus ran into a bit of trouble yesterday on the mid-north coast of New South Wales … 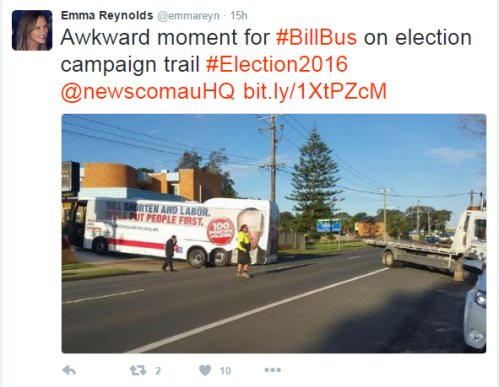 The rhetoric of the honourable leader of Katter’s Australian Party often harkens back to the good old days when men wore hats and Australians were white; yesterday Bob Katter took us back to the “days of fiddle&song” … 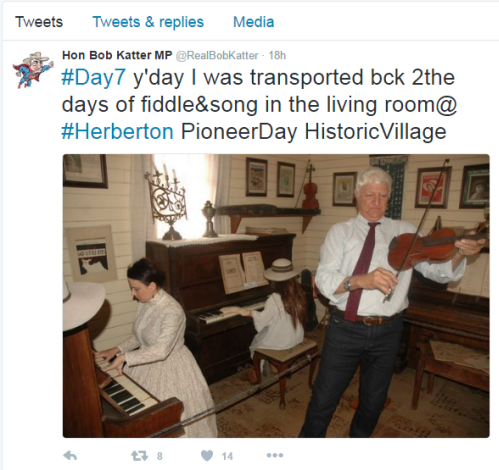 Things are getting a bit silly as the sniping and undermining continues, #auspol and #datboi collide and both sides clown around, trying to one-up each other in health funding in the NT and transport funding in SA.

But isn’t Katter himself of Afghan heritage?