No one watched the first Shorten-Turnbull debate.

Few tune in for first debate. Good news for Malcolm Turnbull. While most commentators thought Bill Shorten had won last Friday’s “People’s Forum” debate on Sky News, at least not many people were watching.

The Sky News People’s Forum averaged 54,200 people on Friday evening, the 13th most watched program on the night for pay television, but easily beaten by the Geelong-Adelaide game on Fox Footy, with 352,000 viewers. And on free to air, there were far more people watching Eurovision, by a factor of 12. The first semi-final of Eurovision started at 7.30pm and averaged 636,000 viewers across the country.

It’s possible a few more thousand watched the debate online. The debate was aired by Sky News on its Facebook page and offered it free of charge to other media to run, but only the news websites (The Daily Telegraph, which co-hosted the debate, and The Age and Sydney Morning Herald) took up the offer. The ABC did not — to the consternation of Tony Abbott, who told Chris Kenny on Sky News last night that the ABC was “playing politics” by not showing it.

Australia Council’s Revenge? Amid all the gnashing of teeth about the defunding of many of the country’s arts institutions has been a particular gripe about how the Australian Council grants have overlooked titles devoted to nurturing young writers, like Meanjin and Express Media, which publishes Voiceworks.

But another title also didn’t get funding, to relatively less notice. The right-wing Quadrant did not get a one-year $60,000 grant, the first time in its 60-year-history the magazine has been “completely denied” federal funding.

“[S]ince its founding in 1956, Quadrant has consistently defended high culture, freedom of speech, liberal democracy and the Western Judeo-Christian tradition. Apart from the grant we have now lost, we have no other public subsidies or major patrons. We survive entirely through the honest market revenues of subscriptions, newsagent sales, and donations from subscribers.

“The Australia Council’s decision to end our funding is plainly an act of revenge by its bureaucrats and advisers. It is designed to punish us for being on the same side of the political fence as the Abbott government’s Minister for the Arts, George Brandis.”

So the Australia Council, which funds hundreds of small arts organisations such as literary magazines, has less funding, because Brandis took millions away from it to pour into what became the Catalyst fund. OzCo has responded by not allocating Quadrant a portion of its vastly smaller funding pot out of a sense of revenge. At least, according to Windschuttle.

The piece includes a write-up of why Quadrant is much more deserving than any of the others who received funding (its focus on poetry headed by Les Murray; it has more subscribers), and more deserving than some of those who lost out. A slap at Meanjin (“teetering on its last legs anyway”) was called “ungracious” by Meanjin’s editor Jonathan Green. As Crikey told you on Friday, 62 organisations have been cut from the Australia Council’s four-year funding program. — Myriam Robin

Redundancy roll call. After deadline on Friday, Crikey’s piece on who’s leaving Fairfax in the current redundancy round got a few major updates. Confirmed was the departure of Gold Walkley winner Anne Davis, the paper’s investigations editor, who decided to leave after 22 years.

Every Friday Fin editor-in-chief Michael Stutchbury sends out a letter to subscribers. No mention of the redundancies was made in last week’s edition. — Myriam Robin

The price of investigative journalism? Meanwhile, Richard Ackland used his Saturday Paper column to tell his readers that several sources within Fairfax told him the Commonwealth Bank reduced its advertising with the group following Adele Ferguson’s exposes of rogue financial planning at the big bank.

Too big to fail? Is scale in digital media enough to make a profit? Two of Britain’s major print groups that have relentless pursued scale across the globe through free websites are grappling with the complications of expansion, with this factoring into leadership announcements over the weekend. The two media groups are heading down different routes, but both are being driven by the remorseless pressures from digital changes and the collapse in print ad revenues.

Long-time editor and the driving force behind the expansion of the centre-left Guardian, Alan Rusbridger, decided late last week to quit the trust that owns the paper after other directors and his successor as editor raised questions about his continuing influence at the paper as it prepares to undergo a wrenching cost-cutting campaign. And DMGT, which owns the conservative Daily Mail, Sunday Mail and Mail Online, has found its new CEO from outside the clubby London print media world by selecting a digital “expert” and friend of the owner. New CEO Paul Zwillenberg was the head of Boston Consulting Group’s media practice and a former DMGT executive, having worked with or in the group for much of the past 20 years.

DMGT’s problem is this: its trashy Mail Online is the world’s most popular English-language news site, but it brings in only 10% (73 million pounds) of the company’s total revenues. According to the Daily Mail’s own report, Zwillenberg’s appointment comes as the company “needs to extract more revenues” from its millions of daily visitors.

At the Guardian, Rushbridger built the website into one of the world’s most popular, with expansions in the US and Australia. But it lost a stunning 58.6 million pounds in the year to March. The huge cash pile that financed expansion shrank by 100 million pounds to just under 740 million pounds. It could be gone by around 2024 at the current rate of spending. So management is cutting costs by 20%, and sacking 100 journalists. — Glenn Dyer

Video of the day. How do you make the perfect Eurovision song? This year’s hosts figured it out in this hilarious interval act … 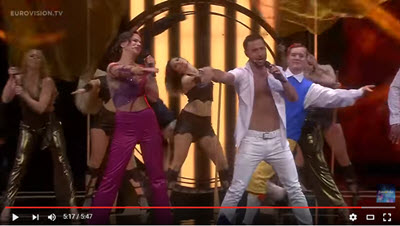 Since the Crikey Commissariat has to blame someone for their Bull not getting as many bouquets as they feel he deserves, someone is to blame’
And the winner is Quadrant!!!