Crikey Campaign Scorecard: slow-starter Malcolm tries to find some friends in the west

Malcolm heads west to talk up housing, while Bill's campaign bus is all about cars

Bernard Keane, Crikey politics editor: The more discussion there is about a hung Parliament and working with the Greens, the worse it is for Labor. It increasingly looks like the Greens are deliberately pushing the issue to undermine their primary opponents, and they are likely being successful at that. For swinging voters, the easiest way to deal with the possibility of a return to the Labor-Green union of the Gillard years is to vote Liberal. When the agenda switches to bread-and-butter issues of concern to voters, as we saw in Friday night’s debate, Bill Shorten, for all his lack of polish, looks much more assured. Weekend honours even.

Eva Cox, Australian writer, feminist, sociologist, social commentator and activist: Friday night, the first face-to-face encounter! Who would come out of the debate with the western Sydney imprimatur? The two leaders clearly in different modes: Turnbull, the CEO explaining the plan to the shareholders, Shorten the political candidate, putting his case with the rhetoric of many hard-line debates. So Bill won the local vote, and, according to today’s Telegraph polls, is seen as more likely to serve western Sydney well — but they still are not prepared to vote for him. Odd and confusing, maybe they are not just self interested? The rest of weekend was boring as the only announcements were very apolitical: swimming lessons and diabetes monitors. Who could object to either?

Dr John Hewson, former Liberal Party leader: I’d give the first week, marginally, to Shorten. Both avoided the “clanger” or “gotcha moment”, which was the main challenge in the first week, but both were pushed off message by party tensions. Shorten got a better run of issues in the public meeting, but he carries the main danger of just being too populist and spending too much. Malcolm struggles with “common speak”, having difficulty just getting the essence of his message across. As you saw in the public meeting, Malcolm doesn’t like “sharing the sandpit”, and Bill would be the most annoying kid in the sandpit; he’d want both the bulldozer and the shovel. Mostly, the electorate is not tuning in just yet

Dr Dennis Glover, veteran Labor speechwriter and fellow of Per Capita think tank: It’s hard to see who is winning so far, as I doubt many people are switched on yet. For example, I only found out about the debate when I got an email from the Labor campaign late on Friday afternoon. Add to that the fact it was on Sky and its influence was likely to be negligible. I’ll take it as reported that Shorten won, which builds on a feeling that is slowly becoming apparent: something is wrong with Turnbull. A bit of empathy aside, he is looking a bit off his game. I guess the Coalition’s hope still rides on the buffer of seats they have and that their Textor-Crosby message about economic management will eventually work, as it did for David Cameron in the UK. They might want to put Abbott in a chaff bag, by the way.

Labor has kicked into gear with some more significant spending promises over the weekend focused on family violence, swimming lessons and the car industry. The government has pledged to support diabetes sufferers with funding for new glucose monitoring technology. 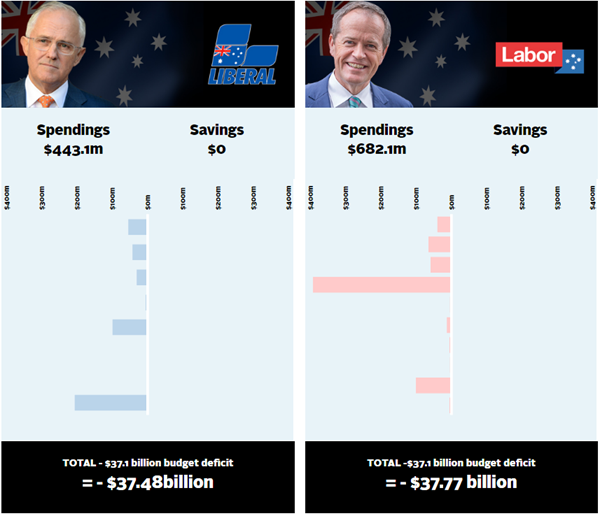 Malcolm Turnbull: The Prime Minister hit the campaign trail in Western Australia, a state that has been favourable to the Coaltion in recent years. It’s a difficult time for the WA Liberals with Premier Colin Barnett’s government facing dire polls and a disastrous state budget, so the PM will need to tread carefully. With three WA Labor MPs retiring the government is likely to push hard to bolster its numbers in the west, and Turnbull put house prices at the top of his agenda.

Bill Shorten: The Opposition Leader headed home to Victoria, where he’s throwing a lifeline to the struggling car industry. He teamed up with Victorian Premier Daniel Andrews to beef up Labor’s jobs and industry credentials and criticise Malcolm Turnbull for allowing the car industry to collapse. He then proceeded to throw a few zingers towards his opponents.

The Greens: The Greens were quick to reassert that Labor would jump at a coalition government with them in the event of a hung Parliament, despite being rebuffed last week. In the meantime they’ve moved to cash in on Labor’s muddled message about penalty rates. Targeting the Sydney seat of Grayndler, Adam Bandt outlined the party’s policy to protect penalty rates and challenged Bill Shorten to do the same.

Turning our attention to the Victorian rural electorate of Indi and the 2013 surprise winner, independent MP Cathy McGowan. She’s aiming to turn Indi orange again in an effort to win a second term. Her opponent, former Liberal MP Sophie Mirabella, has faced an uphill battle to regain her old seat. A presumably fake Scott Morrison tweeted what many are thinking. 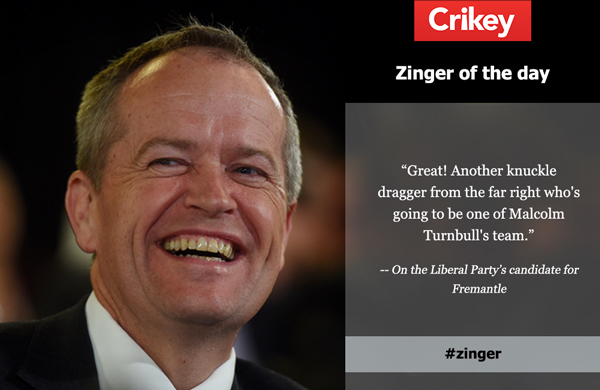 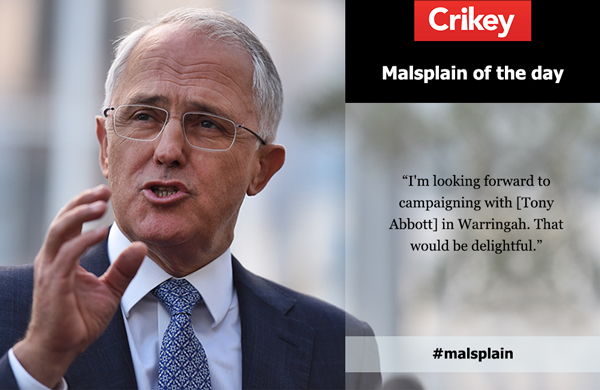 In short, he’s standing under an Australian flag the size of a small island. The former prime minister has done an admirable job of staying in the background during the campaign. Yesterday he addressed the national media to praise Peta Credlin, tell us all he was keen to serve a full three-year term and hint that he’d be open to a position in cabinet. 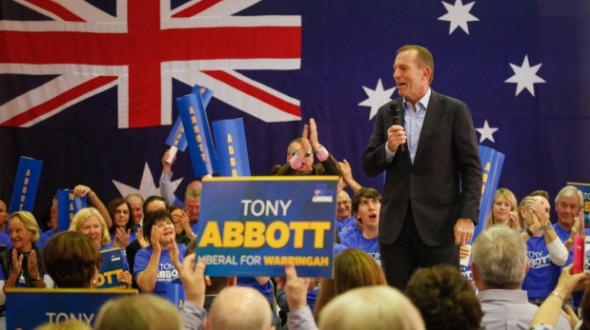 No word yet on whether the flag is being considered as a new offshore processing centre.

AT AUSSIE, WE’LL SAVE YOU

It seems that “you” might be referring to Malcolm Turnbull and the Coalition after the Liberal Party released an ad attacking Labor’s negative gearing policy. The clip features comments from Aussie Home Loans founder John Symond, whose dulcet tones outline the impending collapse of civilisation that would surely follow a Labor victory.

Bill Shorten has mentioned his “United Labor Team” about 2542 times so far in the campaign, and it’s a very apt slogan. It certainly seems they’re united on the issue of asylum seekers. Labor candidate for the Kooyong Marg D’Arcy was a vocal critic of boat turnbacks at the last election and criticised Bill Shorten after he helped oust Julia Gillard. In fairness though, “The United on most issues except some which are complex and unresolved but in the end we get on pretty well Labor Team” wasn’t as punchy.

The Coalition didn’t want class warfare at this election, and fans never like it when sport and politics mix. Well nobody told the Western Bulldogs cheer squad. The proudly working-class club unveiled this cheeky banner before their match against eastern suburbs rivals Melbourne yesterday. Woof! 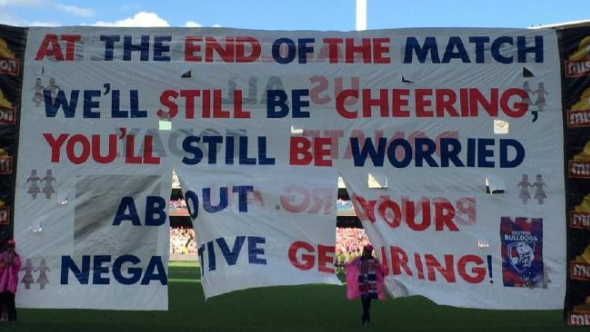 Is that you, Paul Keating? A decent burn from @thematador66 on Twitter, taking down Tony Abbott. Give him a follow!

Abbott strutting around like a rooster thinking he is still relevant. Everyone else views him as a washed up capon. #auspol

Malcolm Turnbull headed west to try and consolidate one of his party’s stronger states. Bill Shorten is back home in Victoria hanging with Premier Daniel Andrews. Meanwhile, Richard Di Natale was shown to be more trustworthy than Bill Shorten according to ABC’s Vote Compass.