All bow to the great god of manufacturing, you hypocrites

Bill Shorten wants Australia to remain a "manufacturing powerhouse". Rubbish: Australia is now a services powerhouse, and that's where its strength lies.

Bill Shorten has been busily demonstrating that the art of the pork barrel isn’t dead in modern electioneering. Last week Labor got several days of good publicity from the Townsville Bulletin for its appalling commitment to waste $100 million ($100 million!) on a new stadium in Townsville in order to knock off local LNP MP Ewen Jones, one of the good eggs of the current Parliament. Townsville and environs are currently struggling economically with the end of the mining boom, but a new stadium that will be filled a couple of times a year certainly isn’t going to provide much in the way of ongoing economic growth. It might be better, per JM Keynes, if Shorten committed to burying $50 million in a huge pit near Townsville to encourage local businesses to dig it up — at least that would use the existing skills base of the town’s workers, and it would be cheaper too.

Today Shorten is in Geelong, promising $59 million to help workers transition from the end of the automotive manufacturing industry — while also committing to keeping Australia as a “manufacturing powerhouse”. But manufacturing isn’t a powerhouse in Australia. The last time it could have been described as a powerhouse was in 2006, when it still employed 10% of Australians. Now it employs just above 7% of Australian workers, and falling — fast. It’s now only the sixth largest employer of Australians. If you want a powerhouse, try health and caring services, which employ 13% of all workers, or the services sector — nearly 9% — or construction, 9%. Or even retail — just under 11%. Or mining, which hardly employs anyone but generates tens of billions a year in export revenue, or education, which generates nearly $20 billion in export revenue. These are our economic powerhouses.

But manufacturing is a powerhouse inside Labor. The AMWU and the AWU are influential unions and sources of funding for Labor. And for all of Malcolm Turnbull’s rhetoric about agility and innovation, the Coalition isn’t immune from this nonsense. The current government started life promising a refreshingly rational approach to economic policy, under which multinational parasites like the big car companies wouldn’t simply get handouts to prop up local manufacturing, and the massive cost of buying a new generation of Royal Australian Navy submarines wouldn’t be bloated by building them locally. Sadly, electoral pressures saw that approach abandoned, to be replaced, under Malcolm Turnbull, with full-blown defence protectionism under which we’ll be spending tens of billions of dollars more on defence procurement in order to employ a few thousand manufacturing workers locally.

If there are major differences between the parties on tax, or education funding, or climate action, there are none when it comes to worshipping at the altar of manufacturing. And that’s exactly as voters would have it. Australians cling to the belief that manufacturing is somehow a more authentic and more important form of economic activity than services industries, even as they themselves have embraced, and participated in, the massive growth of the services economy in Australia in recent decades. Voters want it both ways — they want a 24/7 services-based economy that delivers both lifestyle and core services (like health and childcare) but also retain a quaint view that making things is more valid, more real as a job than making a coffee, cutting hair or looking after kids or an elderly family member.

Still, as the fate of Tony Abbott and Joe Hockey illustrated, woe betide the politician who decides that that hypocrisy isn’t sustainable. 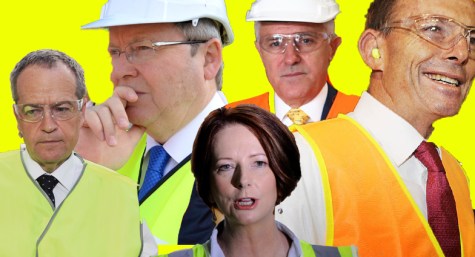 Manufacturing has always provided unskilled jobs for unskilled workers. Let’s not sneer at such people as henceforth-unemployable. After all, we were all unskilled teenagers once.

They’re the “structurally unemployed” a large and globally growing group of people that by the simple logic of capital have no value for the functioning of our advanced civilisation. Left overs and excess, new outsiders of a global apartheid between the included (those that are able to be exploited in the traditional sense of selling their labor product) and the excluded (the ever rising youth unemployment rate demonstrates that unskilled and experience – free jobs are rapidly disappearing).

Really a bit of nonsense here. Surely we want all sectors to survive in our economy. Do you want Shorten to rally the faithful with a judgement call that manufacturing is f****d and you better get used to pushing trolleys around the supermarket carpark?

Australia is transitioning to a consumption economy with reduced means for many to consume. We are willing parties to this dilemma when we rely on mining which might produce billions but really the costs in infrastructure and tax concessions are huge. We also have a PM who champions a financial industry which produces nothing but extracts huge amounts of unearned profit from our economy.

I’d rather see some propping up of manufacturing compared with inflating asset bubbles.

Just returned from Hannover fair, largest expo of industrial manufactures in the world. My small exporting manufacturing company was joined by only 2 others from Oz.
16 hanger like buildings stuffed full of manufactured industrial items, maybe from 1500 firms. Many from Germany, lots from China, Turkey and other countries trying to earn money to pay for imports they want or need.
No wish to say manufacturing is a panacea for our economy, but can we wean ourselves off cars, trucks, whitegoods, electronic gizmos, industrial machinery et al – all of them imported ?
We export to countries many of which have duties up to 30%. Our competitors sell here after paying duties much, much lower. Make an inevitable conclusion.
Not much left to sell inbetween resources booms except our farms and real estate.
My situation is fine, saved a decent super balance while the going was good. Future generations will not have the choice of jobs manufacturing provided for me.

It is possible that sometime in the future we will be poor enough to compete with the massive scale of production of consumer goods that is in Asia but I hope not.

Respectfully, you are well off track with this piece.

Successive Federal Governments have not only failed to support Australian-owned industry since the 1990s through abandoning subsidizing high standard technical training, but have actively encouraged foreign takeover of Australian based manufacturing, thus creating conduits for siphoning profits out of the country. Consequently, the national industrial base has progressively withered.

During WW2, part of Australia’s existing industrial base was able to be diverted from manufacturing farm machinery or whatever to quickly building 60 Corvettes (See: http://www.battleforaustralia.org.au/RANCorvettes.php).

More recently, we are seeing huge waste of scores of billions of dollars on aircraft carriers, air warfare destroyers, submarines which are collectively inappropriate platforms for Australia’s near region of military interest, south of the Equator between the eastern Indian Ocean and the island States of Polynesia. These major projects have all murkily involved big multinational arms conglomerates. Essentially; Australia does not have a general industrial policy and the Government is trying to substitute a foreign-owned defence industrial base, producing hardware with no markets beyond Australia.

Ironically, AUSTAL of Perth is manufacturing a vessel for the US Navy most suited for Australia’s regional needs (See: https://en.wikipedia.org/wiki/USNS_Choctaw_County_%28T-EPF-2%29). 6 have already been built at their Alabamba, USA shipyard with another 4 to follow.

A couple of years back FORGACS of Newcastle was forced to sell their floating dry dock to offshore interests and their large Brisbane dry dock is now up for sale. The Federal Government also sold off the Commonwealth Aircraft Corporation facilities at Fishermans Bend (now owned by Boeing) and Avalon to a transport mogul, so it seems they are prepared to forfeit assets which ought to remain nationally owned to preserve some reserve defence industrial capacity.

Regarding the delusion that Australia can transition to a services based economy. Ever since the spivs of the so-called Financial Services Industry conned the Federal Government into steering away from a Singapore like model for superannuation savings, the corporate cowboys have been playing overseas with national savings. But note how many are now backing out of overseas ventures (including the big banks) after significant losses. To suggest that Australians are smarter than others in this regard is really an affront. Similarly in the tourism and hospitality industries, where standards offshore are far superior.

The halcyon years for Australia were post-WW2 up until about the mid-1960s and there has since been progressive national decline in multiple respects. Unless the nation can return to generation of export income to cover increasing social costs, national integrity will only further weaken.