The Queen and western barbarians ... Why News goes after people like Duncan ... BBC renovates with white paper ...

The Queen and western barbarians. The Queen was recently caught on camera saying a Chinese delegation to the United Kingdom had been awfully rude. The Global Times, which is affiliated with the Chinese Communist Party, has responded in the following Chinese-language piece (translated by AFP):

“The West in modern times has risen to the top and created a brilliant civilisation, but their media is full of reckless ‘gossip fiends’ who bare their fangs and brandish their claws and are very narcissistic, retaining the bad manners of ‘barbarians’ …

“As they experience constant exposure to the 5,000 years of continuous Eastern civilisation, we believe they will make progress”

Why News goes after people like Duncan. News Corp is in full cry against Q&A questioner Duncan Storrar — principally because Q&A panelist Kelly O’Dwyer made a goose of herself in responding to his question, blathering on about $6000 toasters — industrial-strength, as it turns out, but the sort of thing the public will imagine Malcolm Turnbull keeps in his “harbourside mansion”.

This gaffe added to the perception that the Coalition was just a liiiiiitle out of touch, and so the flying squad scrambled, finding a few disturbing episodes from Storrar’s past. The implicit proposition appears to be that people with a few demerit points racked up don’t get to have an opinion. Well maybe, but if so is Caroline Overington really the person to be leading the charge in The Australian?

The never-boring Overington’s career hit a speed bump a few years back, when a complex entanglement with would-be MP George Newhouse ended with Overington either slapping or shoving around the diminutive Newhouse at a polling station. Now, after a stint at the Australian Women’s Weekly, she’s back. Apparently journos are allowed a few more strikes than people like Storrar, who get targeted when the right is too incompetent to score any points against the actual opposition. — Guy Rundle

BBC renovates with white paper. Unveiling an overhaul of the BBC in a white paper, John Whittingdale, Britain’s secretary of state for culture, media and sport, said communications regulator Ofcom will oversee the BBC in future, while the National Audit Office will have responsibility for carrying out financial audits of the broadcaster. The move means Ofcom, rather than the BBC Trust, will have responsibility for adjudicating on serious complaints and imposing sanctions where necessary. This will remove the charge that the BBC is regulating and investigating itself, especially on major issues. Ofcom currently regulates commercial broadcasters (like the Australian Communications and Media Authority does in Australia) and has the power to fine and publish critical adjudications.

The BBC’s charter will now be renewed every 11 years, rather than 10 years at present, and the BBC’s current chair, Rona Fairhead, will remain in her post until the end of her term in 2018. The BBC will in future have to publish names of journalists and freelancers paid 450,000 pounds a year (A$890,000) or more (said to be as few as a dozen). The BBC will be responsible for appointing at least “half of the board members”, but as to who names the remainder has not been outlined (and will be a key power for whoever does it — this has emerged as a key worry for critics of the proposal). The white paper proposes that the new charter will also strengthen the independence of the BBC, with special (unnamed as yet) “protections” for the BBC’s editor-in-chief, the director-general.

Interestingly, as part of the new deal, the BBC will allow independent producers to bid to make 100% of its output outside of its news programs (currently they are limited to 50%), including returnable series such as EastEnders. It also gives approval to the BBC desire to turn its in-house production department into newly commercial BBC Studios (and compete with the likes of ITV Studios, the commercial production arm of ITV). Rival broadcasters will be able to bid for a 20 million pound pot to make public service programs such as children’s TV, on a trial basis. Plans for much of this deal were already set in motion in July 2015 when the corporation reached an agreement with the government. — Glenn Dyer

Enough with the selfies. Think the campaign is vapid? Of course it is, writes Laura Tingle in The Australian Financial Review. There’s still seven weeks to go and none of the major parties want to do anything to upset the postal votes (not due for a month). But the media’s to blame too, as junior reporters, as they always do, find themselves on buses costing their organisations a quid for accommodation (media outlets have to pay their own way) and forced to justify the investment. With so many platforms to fill, no news is too minor. And then Tingle drops this scathing criticism:

“The thing that is conspicuously different this time is the personal pronoun.

“If, judged by the nightly news bulletin, you think the election campaign this week has been full of the inconsequential, try following it on social media where we are treated to, in a number of cases, people who are unable to distinguish between the story they are covering — the election campaign — and a once-in-a-lifetime opportunity to become reality TV stars: photos of the media pack getting off planes and buses; selfies with politicians at campaign events; what has been eaten for lunch; that sort of thing.

“It’s all harmless fun at one level and many social media followers love the sense of ‘behind-the-scenes’ intimacy but, wedged between the pressure to deliver and, at another level, for some media outlets, the ideological demands of editors to deliver the hammer blow to Labor policies, it is sometimes hard to remember that the job at hand is to ask questions of politicians and to try to tell your readers what is actually happening. Which sometimes is nothing much at all.” 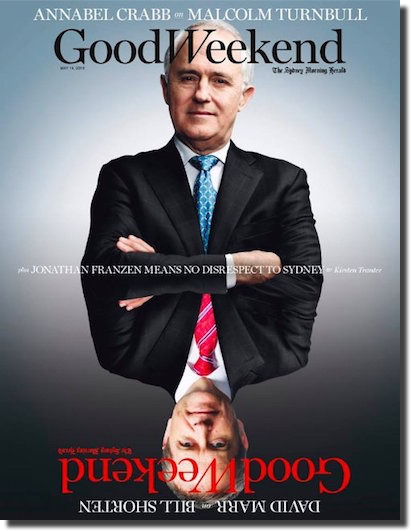 Laura Tingle is right to criticise. The Oz media is well & truly embedded in the election campaign to the point of dissolving into the picture.

That Grundle punchline was very spicy. Imagine how much of a culture warrior you’d have to be to write a hitpiece on some nobody. Really gross

There’s an unhealthy symbiotic relationship that has developed and been nurtured by both sides – and we voters are missing out, not being kept abreast of developments in an objective way.
And, by extrapolation, our governance is a victim – rising or falling on perceptions that aren’t necessarily based in reality.

As we all learned during the recent, repeated unpleasantnesses in Iraq, if journos. are embedded they cannot function independently and thereby rapidly become complicit.
Politicians are not our friends, I don’t want the likes of Crabb’s appalling Kitchen prog. trying to make them so human but that was just TV froth during downtime.
As the old cartoon put it, “Stop Laughing, This IS Serious”.
Our nation is at stake, this is the most important election since ..insert.., we are on a cliff edge and must move forward, Harbourside Mansion Man’s New Clothes are of finest quality and if you don’t concur you must be dumb.