A poster makes it looks like the candidate is avoiding debates.

While the first “people’s forum” between Bill Shorten and Malcolm Turnbull will kick off tonight, voters across the country will also get to see their candidates in local forums as well. But the forum in Indi in Victoria’s north-east will go ahead without one of the most high-profile candidates … 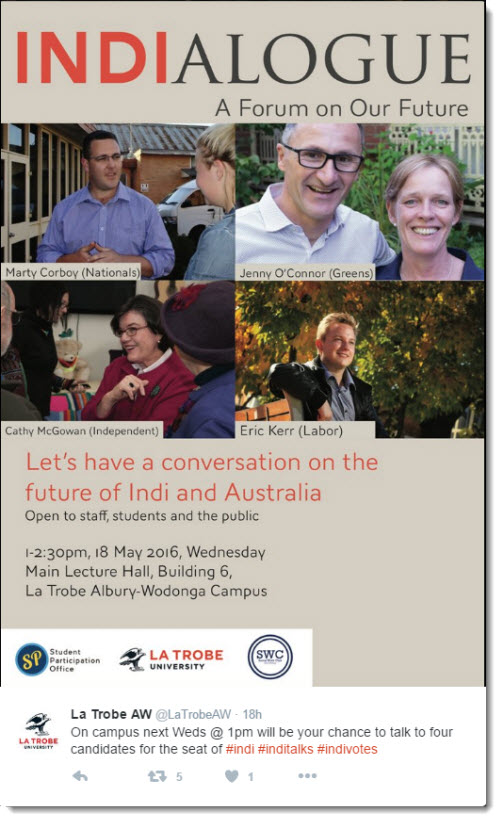 The debate, to be held at La Trobe University’s Albury-Wodonga campus on Wednesday, will include independent MP Cathy McGowan, Nationals candidate Marty Corboy, Labor’s Eric Kerr and the Greens’ Jenny O’Connor. Bur the former Liberal MP for the seat, Sophie Mirabella, is nowhere to be seen. It’s unclear from the social media post who is actually organising the forum — when we called La Trobe they had very little information, saying the campus was just the venue for the event. Mirabella’s camp tell us she will be taking part, but a communication error was to blame for her not ending up on the flier. The last forum didn’t go well for Mirabella, when she admitted on Sky News that the Wangaratta Hospital had missed out on $10 million of funding when she was not re-elected as part of the Abbott government.

So happened to see Sophie driving through Beechworth yesterday, looking insignificant. Today I stumbled across a Cathy McGowan pop-up shop in Yea. The community vibe is definitely against Sophie (it’s all about her). I hope that Malcom is not counting on winning back Indi.