Duncan Storrar is right, ScoMo is wrong — money does mean more to the poor

A little goes a long way when household income is low. The same boost requires a lot more money once you’re richer.

Treasurer Scott Morrison believes in you. Here’s what he said in delivering the budget:

“[W]herever possible we prefer to leave a dollar in Australians’ pockets than take it for the government’s pocket, because we know that it is money in your pocket that can help you and your family most.”

It’s a weird thing for the nation’s chief tax-taker to say. On one hand he takes 25% of GDP in tax, but on the other hand he reckons that’s bad?

If you take his argument to its extreme you have no justification for funding the federal government at all. The problem is he’s making that same statement to all of us, rich and poor alike.

While I can see the case for leaving those last few dollars in the hands of a cash-strapped family of six, I can’t quite see the same case when it comes to a double-income couple like Malcolm and Lucy Turnbull.

Part of the basis of our progressive tax system is that a person has a declining marginal utility of money. With our first $20,000 a year we meet very basic needs. Our next $20,000 goes on things less basic. This goes on and on until the difference between making $280,000 and $300,000 a year is barely noticeable.

The government knows by this stage you’ll just be buying a different brand of truffle oil and maybe a second gardener with that marginal 20 grand, and says OK, Society can probably think of better things to do with that money. Let’s have 47% of it.

The question posed on ABC TV on Monday night by Duncan Storrar — a man with a disability who has worked on minimum wage and is now a flashpoint in the election campaign — relates directly to this concept.

“If you lift my tax-free threshold, that changes my life. I get to say to my little girls, ‘Daddy’s not broke this weekend, we can go to the pictures’,” he told Assistant Treasurer Kelly O’Dwyer. “Rich people don’t even notice.”

We have estimates of the marginal utility of money from the Australian Unity Well-being Index. A little goes a long way when household income is low. The same boost requires a lot more money once you’re richer. 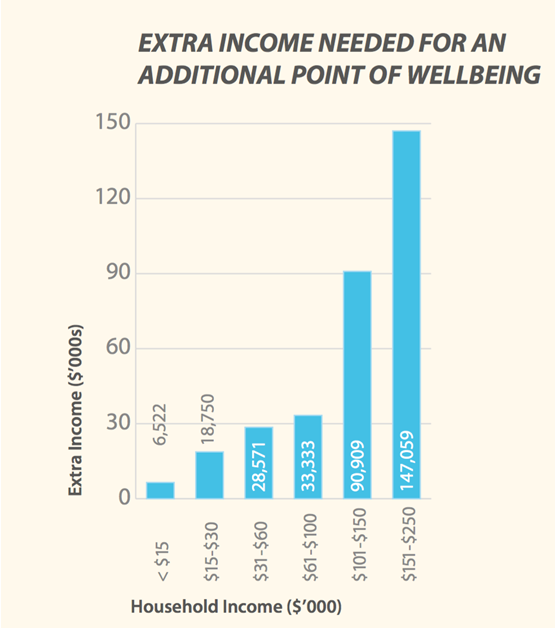 In fact, above a certain level, some household members seem to experience a reversal in well-being. 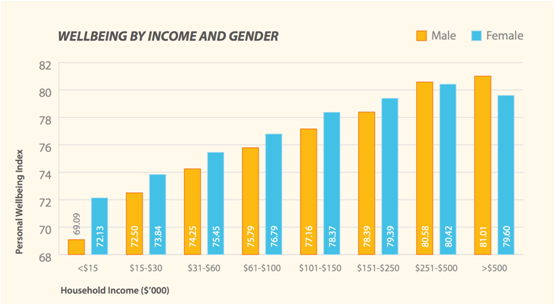 There is more at play.

The budget again spells it out. “Australians understand that our outdated tax system is punishing hard work, hindering growth, limiting opportunity and hampering innovation,” it said.

There is a clear case for allowing some people to be paid more than others. Willful blindness to the importance of incentives has tripped up economic systems in the past.

But again, it is not clear what motivates us to get ahead is the sheer volume of reward so much as the positional good of having a bit more money and status than our friends and rivals. As wages rise and the economy expands, we haven’t seen people work more and more; quite the reverse.

This suggests even tax-transfer systems with plenty of redistribution can still leave room for an incentive for “working hard and getting ahead”.

Encouraging hard work is not the only kind of incentive in the tax system. There are also incentives for tax dodging. I still remember the disappointment I felt when I heard Pat Rafter, Australian tennis champion, was resident in Bermuda for tax purposes.

Cutting tax to avoid tax dodging seems to have things backwards, however. A truly sophisticated analysis of all the incentives would admit a major OECD country cutting taxes to eliminate tax avoidance is only likely to make other jurisdictions do the same and leave us, at some future point, with a similar tax rate differential.

Nevertheless, keeping taxpayers onshore is, on balance, something of a justification for Scott leaving earnings in our pockets.

Remember Duncan from Q&A? After he asked his very pointy question, The Australian newspaper pointed out he pays “no net tax”. The amount he gets in cash transfers, they revealed, is larger than the tax he pays.

This “gotcha” depends on a pretty narrow idea of the benefits of government. We all benefit from roads, hospitals, defence, etc.  On average, Australians get back what we pay for. Poorer people get more in income support, but richer people get benefits, too.

You could argue those relying on our well-governed market system to make hundreds of thousands a year and protect their investments are getting as much from government as poor old Duncan — perhaps even more.

Not to mention the benefits they get from living in a relatively equal society. We may well ask who gets benefits from social welfare. Is it only the person on the receiving end of the cheque? Or are we all benefited? Any reduction in suffering, poverty, disease and crime could be seen as an upside — direct or indirect — to all of us.

In any case, ScoMo’s argument that a dollar in the government’s pocket is less valuable than one in your pocket is too simple. It depends whose pockets he is referring to and what the government does with it.

What taxes are really for in the modern economy:

Remember Duncan from Q&A? After he asked his very pointy question, The Australian newspaper pointed out he pays “no net tax”. The amount he gets in cash transfers, they revealed, is larger than the tax he pays.

I don’t read the Oz, but did it occur to any of the bright sparks over there that each dollar less tax Duncan pays and each dollar more he earns is a dollar less in welfare he needs ?

@ Dr Smithy, I do read The Australian and they’re really laying into this man. Today seemingly they’ve trawled through his background to reveal what a blighter he is. Mean girls/boys at high school style.
Reading about this reminded me that I actually pay no bank fees, the bank graciously ceased them a few yrs ago because I was “a good customer”. These costs actually make no difference to me but to others I have no doubts they do. These costs of living in 1st world place are rarely talked about but have a major impact.

Why would the Ozz write anything good about this matter, the truth and honest comment have no place in Murdoch press, why give the poor bloke an even break when tearing him down in public is so much more fun?

No doubt they will scream “public interest” as if most of us were concerned about his past, it is his here and now, and future that is the worry for most caring Australians.

Storrar and those in his situation deserve all the help we can give, even if it does cost Malcolm and his wealthy mates $7k each a year.

Perhaps lotteries would do better to offer several “first prizes”, to maximise the perceived benefit to the punters.

As Sparky notes, there are numerous benefits enjoyed by virtue of being well off in the form of charges not levied.
Lots of aspects of Life are more expensive for the poor – split payments for insurance, those iniquitous NO INTEREST repayments on crappy furniture offered by retailers in the dormitory suburbs, even down to the coin-in-slot gas & electricity meters.