Money for nothing ... dance off challenge ... postal vote transparency ...

Mystery half a billion for ‘transformation’. One slightly overlooked aspect of the federal budget last week was a massive $500 million given to the Department of Finance for “transforming the public sector”. It came up briefly in a Senate estimates hearing last week, with Finance Minister Mathias Cormann unable to explain exactly what the money is for. He said it was a “funding envelope” to invest in “specific initiatives” to help agencies transform and “unlock efficiencies”. When pushed as to what exactly that entailed, Cormann said it was too early to say:

“When it comes to the decision of the government to extend the efficiency dividend and to reinvest a proportion of that into the modernisation and transformation of the public sector, including to unlock the digital dividend that we believe is available, as I have said to you openly and transparently, that is something that we expect to take effect from 1 July 2017. That is what it shows in the budget measure. There is a body of work to be done between now and then. We are very confident that it can and will be done, that it will be done competently and effectively and that it will help to transform and modernise the public service so that it continues to deliver the high-quality advice to government and high-quality service to the community that the federal public service is known for.”

No girls allowed. After a morning campaigning on the Riviera of Melbourne, Prime Minister Malcolm Turnbull found himself back in Melbourne for a spot of lunch — we’re sure he needed it after his run in with Melinda, a mum in Melbourne’s south-east who didn’t mince words. Instead of choosing to eat at one of Melbourne’s many fine establishments that are open to the public, Turnbull popped into the men-only Athaneaum Club for a bite. It’s already received some bad press and wasn’t a great look on the day Peta Credlin dubbed him “Mr Harbourside Mansion”.

So why was Turnbull there? Ms Tips has obviously never dined at the Athaneaum, but the top end of Collins Street is home to some of Melbourne’s best restaurants. He wasn’t swinging any votes in that room, so was it just to avoid the press? Or was there a donor to meet with away from prying eyes …?

Indi sans Sophie? While the first “people’s forum” between Bill Shorten and Malcolm Turnbull will kick off tonight, voters across the country will also get to see their candidates in local forums as well. But the forum in Indi in Victoria’s north-east will go ahead without one of the most high-profile candidates … 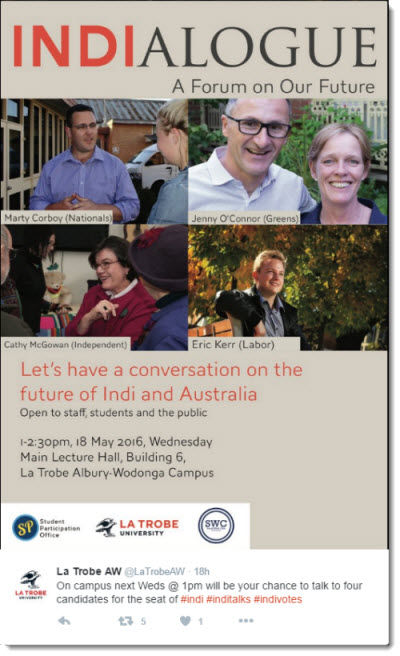 The debate, to be held at La Trobe University’s Albury-Wodonga campus on Wednesday, will include independent MP Cathy McGowan, Nationals candidate Marty Corboy, Labor’s Eric Kerr and the Greens’ Jenny O’Connor. Bur the former Liberal MP for the seat, Sophie Mirabella, is nowhere to be seen. It’s unclear from the social media post who is actually organising the forum — when we called La Trobe they had very little information, saying the campus was just the venue for the event. Mirabella’s camp tell us she will be taking part, but a communication error was to blame for her not ending up on the flier. The last forum didn’t go well for Mirabella, when she admitted on Sky News that the Wangaratta Hospital had missed out on $10 million of funding when she was not re-elected as part of the Abbott government.

Poll position in Ports. The people of Melbourne Ports are getting a lot of attention from pollsters, with robopolls this week asking voters what issues would most affect their vote (“jobs and growth” and negative gearing were options), who they intended to vote for and what their religion was. We haven’t confirmed who commissioned the poll, but it comes just weeks after the Greens polled the same electorate. Labor’s Michael Danby holds the seat by 3.56% and the Greens are circling …

Vote for me, or don’t. Following on from our note about postal votes yesterday, a tipster has shared this letter from independent MP Andrew Wilkie. Like the major parties, Wilkie offers a postal vote form, but his letter attached to it is transparent about where it goes — to his electorate office and then on to the AEC … 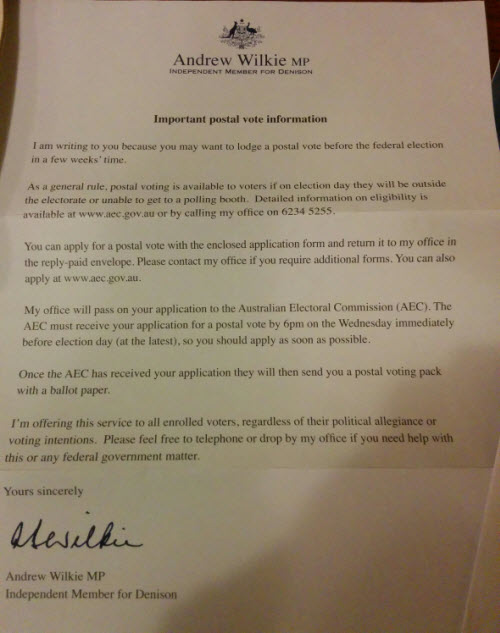 Candy in my heels. A few weeks ago we featured the musical stylings of staff at Museum Victoria as they took part in the Museum Dance Off competition, run by the Tumblr blog When You Work at a Museum. The competition involves staff from galleries and museums around the world dancing to music in YouTube videos, and now Museum Victoria is through to the grand final, competing against the Chrysler Museum in the United States. The winner is decided by a public poll, which is still open, and so far the Aussies are trailing (vote for them here). 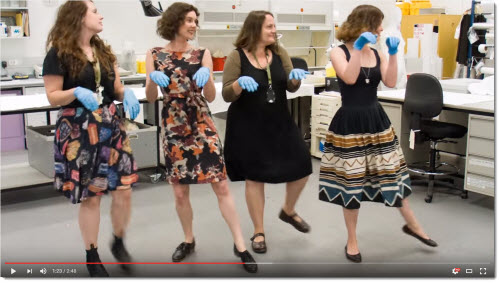 The dance skills on show have inspired the Crikey bunker — we want media outlets to have their own dance-off. So the challenge is laid down: we’ll dance off against any other media outlet that thinks it has the moves. If you don’t believe me, just watch …

A half a $billion “to extend the efficiency dividend”. Come on all you doubters, admit it, that is absolutely brilliant counter-intuitive thinking.