Turnbull got blindsided by a single mum, and Shorten made a big promise on education.

Bernard Keane, Crikey politics editor: While I thought Malcolm Turnbull handled his encounter with Melbourne single mum Melinda very well, it ended up negatively dominating the evening news coverage — especially when contrasted with Turnbull lunching at the exclusive, male-only Athenaeum (who was the genius staffer who let that happen?) and being quizzed about his mention in the Panama Papers. All reinforcing Labor’s stereotype of the Prime Minister. Shorten had an easier time of it — the dumping of Labor’s MUA candidate in Fremantle was an unwelcome distraction but won’t register much outside the west. A birthday win for Shorten.

Paula Matthewson, freelance communications adviser, writer on politics and one-time media adviser to John Howard: Yesterday Malcolm Turnbull’s campaigning day went from bad to worse. After waking to the media revealing he’d been named in the Panama Papers, the PM later had to deal with an impromptu challenge from disgruntled voter “Melinda”, who was particularly well versed on cuts to the family tax benefit. He then made matters even worse by inexplicably popped into the men’s-only Anthenaeum Club for lunch. Meantime, Bill Shorten also had a couple of campaign hiccups, particularly the disendorsement of the unfortunately named candidate Chris Brown for crimes that have long been expunged. A partisan media outlet also managed to punch a hole in Labor’s claimed benefits from its education policy. Shorten and Labor nevertheless won the day, thanks to the glowing Chloe Shorten, who bestowed a kiss on the birthday boy, thereby guaranteeing her man who be prominent on that night’s TV news bulletins.

Simon Breheny, director of policy at the Institute of Public Affairs: The Prime Minister’s encounter with Melinda the single mum was the talk of the town yesterday. Turnbull handled the situation with warmth and understanding. Education should be the ALP’s strong suit, but it’s looking more like an Achilles heel at the moment. Shorten can’t justify massive increases in education expenditure with promises of economic growth — no experts will back his assertion that there is a link between education spending and growth. Labor is all over the shop on border control. The list of ALP candidates who disagree with boat turnbacks grows every day. Thursday was a win for the Coalition.

Jane Caro, author, social commentator and communications consultant: I think the ALP is looking more comfortable at the moment, but this is as much good luck as good management. The Duncan Storrar question on Q&A, the single mother bailing up Turnbull yesterday and Peta Credlin’s “Mr Harbourside Mansion” are all playing nicely into the ALP’s narrative of fairness. Turnbull having lunch at an exclusive all-men club yesterday was a nice gift to Shorten as well. In fact, I’m almost feeling sorry for Turnbull at the moment. Even his friends are not helping him. The extraordinary attack on Storrar in the pro-LNP media is having the opposite of the desired effect. Far from undermining Storrar, it is simply making the top end of society look paranoid, defensive and nasty. Turnbull, unfortunately for him, remains identified with them. He needs to get out from under them. Then to top it all off he gets named in the Panama Papers. Ouch!

Is that pork or beef we can smell? The Coalition is re-promising money to combat domestic violence, while Labor is beefing up its promises and committing a boatload to education. 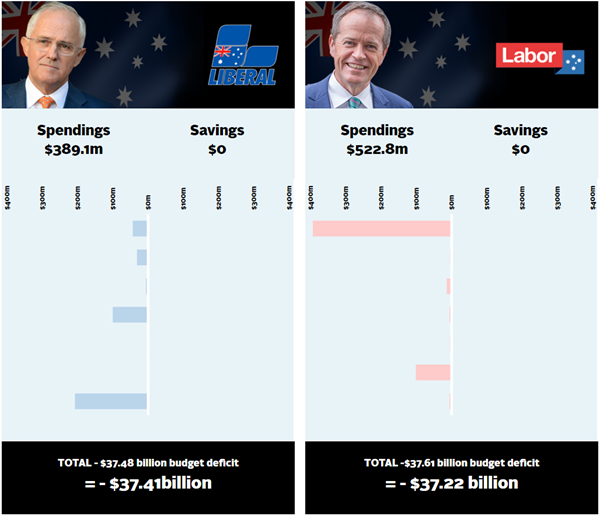 Malcolm Turnbull: Malcolm Turnbull is in Adelaide today; he held a press conference at Flinders University, where he announced $43 million in funding to extend a rail line to connect the university with Adelaide’s rail network. “It’s going to make it easier for students to get to and from the university, it’s going to make it easier for the innovators to work together, it’s going to improve the amenity, the live ability of this part of Adelaide,” he said. Anthony Albanese criticised the announcement, saying the Coalition is merely re-directing money from other public projects, which it has cut. Turnbull again defended changes to super, saying “our changes to superannuation are fair” and attacked Labor’s proposed changes to negative gearing: “Bill Shorten’s reckless and dangerous experiment with the largest asset class in Australia will drive down home values and drive up rents.” On Peta Credlin’s “Mr Harbourside Mansion” comments, he said “everyone is entitled to an opinion”.

Turnbull will debate Shorten for the first time for this campaign tonight at the Windsor RSL club in the marginal western Sydney seat of Macquarie.

Bill Shorten: There was no post-birthday hangover for Bill Shorten today; the Opposition Leader was up bright and early for a run by Sydney Harbor. He visited Domremy College at Five Dock today, where he — once again — spoke about education. Labor has announced that $400 million of additional education funding will go towards teaching scholarships to encourage recent graduates with science, technology, engineering and maths degrees to continue their study and become STEM teachers.  He said in a media statement this morning: “A Shorten Labor Government will make sure all of our kids have the skills they need to thrive in the future. This is an investment in our economy and in productivity but more importantly, it is an investment in our kids.”

The Greens: The Greens’ co-deputy leaders, Scott Ludlam and Larissa Waters, will visit a a share-house in Brisbane today to discuss housing affordability and talk to renters who hope to one day buy their own homes. Responding to the RBA’s comments on negative gearing on Monday Ludlam tweeted: “if removing #NegativeGearing is class warfare, then its nice to have the Reserve Bank with us on the barricades.”

Today was yet another win for Turnbull over Peter King, who was representing Bob Day in his challenge to the Senate voting reforms. Peter King lost Liberal preselection for the seat of Wentworth to Turnbull in 2003 before running against him as an independent, receiving 18% of the primary vote to Turnbull’s 42% and being banned from the Liberal Party for 10 years for his troubles. Bob Day’s challenge was thrown out of the High Court today, and that’s perhaps not uprising given King’s apparent lack of preparedness. In court on May 2 King failed to produce a summary of his arguments, to which the presiding judge had this to say: “It is a normal requirement, Mr King, that you hand up a no more than three-page outline of your argument and it is surprising that that has not happened. Anyway, you had better proceed.” Bob Day and co-conspirator David Leyonhjelm said they had no regrets over the challenge. 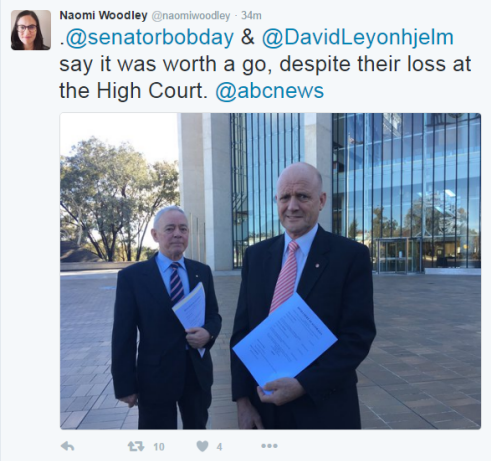 What with single mum Melinda and “Mr Harbourside Mansion”, it’s perhaps not surprising that Malcolm Turnbull was ahead in media mentions yesterday. 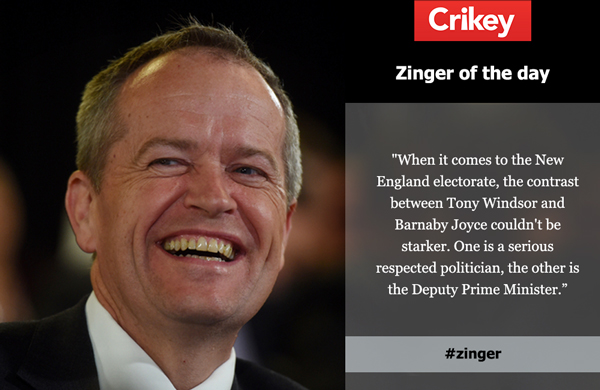 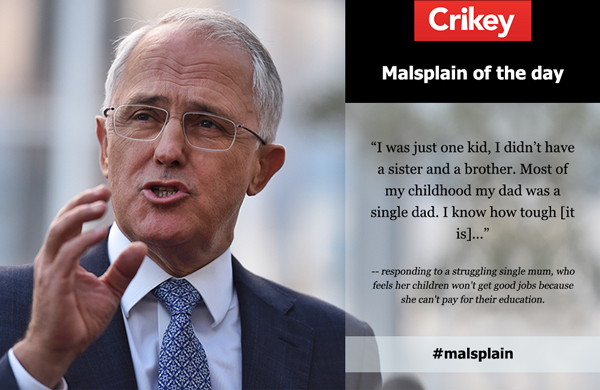 Tony Abbott’s former chief of staff, Peter Credlin (who really needs no introduction at this point), stuck the boot into Malcolm Turnbull last night on Sky news, labelling him out-of-touch and “flat-footed” and giving him a new name: “Mr Harborside Mansion”.

Indeed, following a morning on which his name was revealed to be in the Panama Papers  and  after getting a thorough dressing-down from single mum Melinda over his unfair policies, you’d think the PM may have chosen to lunch somewhere slightly less ostentatious than the exclusive, gentlemen-only Athenaeum Club yesterday.

Meanwhile her former boss, the Coalition’s very own opposition leader, popped up thousands of kilometres away from his electorate: 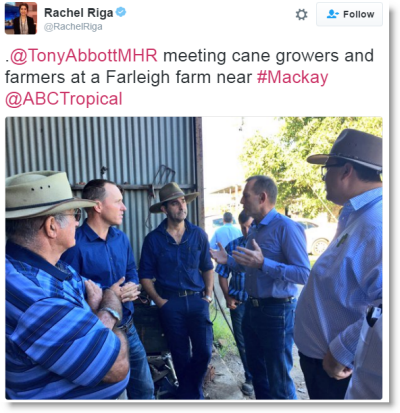 It wouldn’t be an election campaign without a Nick Xenophon stunt. Xenophon called a press conference beneath a Stobie pole in Adelaide yesterday to make fun of Christopher Pyne’s “Pyne Delivers” campaign poster. He provided the gathered media with real pizza while showing off “Pyne’s Pizza box”, which he said was “like Christopher, full of hot air.” 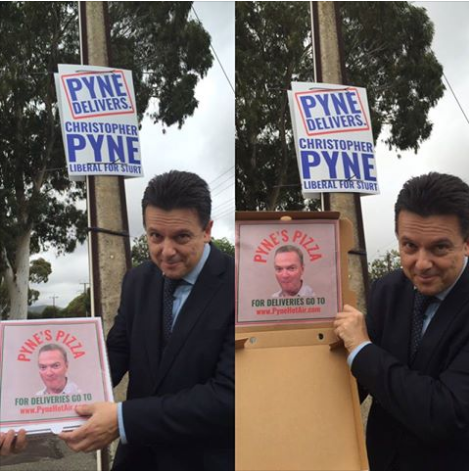 We don’t really understand it, but we do like this dank meme: 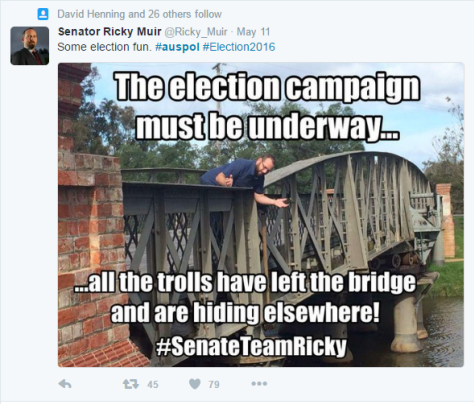 Turnbull had a horror day yesterday — the Panama Papers, single mum Melinda and the gentlemen-only club — all of these things left Shorten looking the stronger candidate. Today Turnbull is focusing on infrastructure and Shorten on (you guessed it) education.

I agree Peta Credlin would not need an introduction, but who is this Peter chap?

So when did it become a crime to lunch as the Athaneum?

Not a crime but it does not give off a “man of the people” vibe.

Credlin was a total failure in her advice to Abbott…just like that turkey McTernan who advised Gillard…what should she even be allowed to provide commentary, given that she’s a rolled gold loser!!!!

Oh I get it…she a comedy commenator.