My house, my house! My house for a website! And other media tidbits of the day.

New Matilda turns to real estate. Indie news site New Matilda mostly relies on donations and crowdfunding to stay afloat, but its latest pitch is quite something: editor and owner Chris Graham has put his house on the market and promises to put “whatever the bank doesn’t take (minus 50% which goes to the other half-owner) … into funding independent media and keeping New Matilda kicking”.

In 2004, Graham’s Canberra home was raided by the Australian Federal Police after the National Indigenous Times (he was the editor at the time) published stories about internal divisions within the government over how to deal with Aboriginal and Torres Strait Islander Commission based on confidential cabinet submissions. We wondered: this the same house?

It isn’t, Graham says — that house was in Garran and this one’s in Mawson. But in a strange twist, the house he’s put on the market has also been raided by the AFP — two years later, in 2006. Graham wasn’t living there at the time, but it was as a result of his reporting. Confidential government documents were used by the National Indigenous Times as the basis of stories about government official Gregory Andrews, who appeared on a heavily criticised Lateline report that helped form the justification for the NT Intervention. The Mawson house as well as two properties in Mutitjulu, near Uluru, were raided by police as a result.

Graham moved in after the previous owner moved out. He told Crikey he’d never lived in a home in Canberra not raided by police. As to using the sale to fund New Matilda, he said:

“People have suggested I’ve got rocks in my head for using the proceeds from a house sale to invest in New Matilda. They obviously aren’t really across the horrible realities of independent media. In for a penny, in for a pound.”

Crikey founder Stephen Mayne has also had the proceeds of selling his house go towards funding Crikey, though not in exactly the same way. When Steve Price sued in 2005, the proceeds were partly frozen after an injunction on the sale of the house. A settlement was eventually reached for $50,000. — Myriam Robin 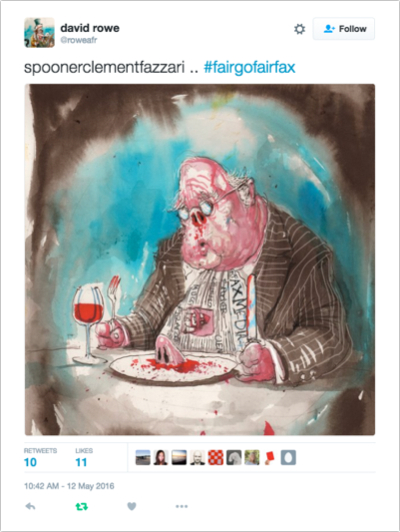 John Spooner, Rod Clement and Rocco Fazzari are all Fairfax cartoonists who have taken redundancies this round.

Unoriginal Sandilands defends repeats. News.com.au yesterday published a piece about how the Kyle and Jackie O show was repeating segments on different days without telling listeners about it. An Australian Radio Network spokesman told the title yesterday’s show was a “best of” program. “Some elements of today’s show had aired previously, this was due to Kyle being unwell and a short turn around to get the show to air at 6am.” Which is all well and good, news.com.au’s Matt Young wrote, but listeners weren’t told the segments were old.

This morning, Sandilands hit back at the outlet, saying he was sick of papers publishing “lies” about him.

“I’m sick and tired of reading things in the newspaper that are outright lies. Even when they contact me for a comment, I might as well not even answer because they just write what they want anyway.”

“But pretty much to wrap things up, over the past few weeks I have had a couple of days off, I haven’t been feeling that well, and it goes on and off, some days good, some days not good. But the truth is, you know, I think i’m still trying to deal with the death of my dad — and I just wanted to keep it private, but I’ve gotta put it out there now.”

“I don’t want all the doom and gloom and people speculating, but you read things online, you know accusing us of tricking listeners and ‘Kyle’s chucking sickies’ and i got a little bit annoyed and then I thought, ‘hang on, don’t be ashamed of actually missing your father. The guy’s died.”

“I’ve gotta come on here everyday, which I love, but some days I just can’t do the fun, do you know what I mean?”

“Darl, you don’t have to explain yourself,” said co-host Jackie O. Sandilands responded: “I feel like I do, because there’s lies about car accidents and I’ve ‘fled the scene’ and it’s just typical, weird lies. I just can’t stand liars.” — Myriam Robin

Video of the day. All election ads should feature cute children. Seriously. 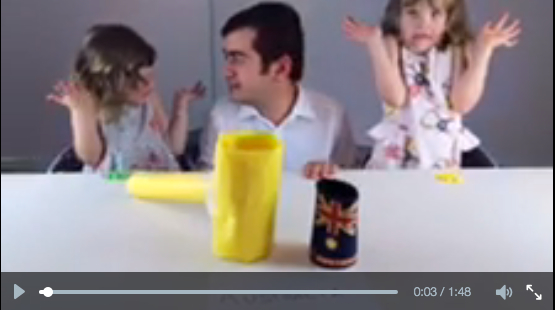