Countdown to a debate no one will watch, and odd first interviews

The news outlet that has snagged the first one-on-one with the Prime Minister of the campaign is ... Marie Claire?

On Friday night, Bill Shorten and Malcolm Turnbull will face off for their first debate (technically a “people’s forum”) of the election season. It’s on Sky News, and the channel has set aside a mammoth three hours in its schedule for it — 6pm to 9pm.

Sky News is part of the Foxtel pay-TV package, available in only about a third of households, and with far weaker ratings than the free-to-air channels: Sky News almost never gets more than 100,000 viewers and would usually be lucky to get half that. It is a favourite of political junkies, insiders and partisans, suggesting the leaders have decided to play to an audience with their minds already made up as a warm-up before broader pitches to the nation sometime in the next seven weeks. Sky News is making sure none of its viewers can forget the debate is on — yesterday it had a countdown clock on screen every time election news was discussed … 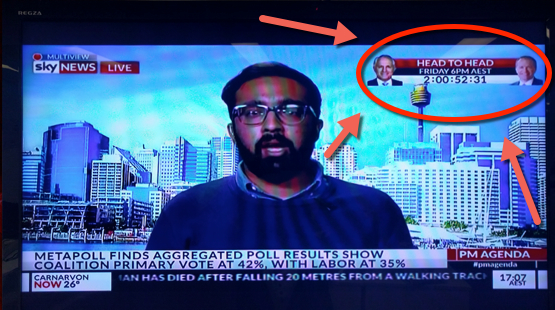 The debate will be hosted by David Speers and is organised in conjunction with the Daily Telegraph (which will stream the forum on its website). The leaders will take questions from audience members in the western Sydney electorate of Macquarie, currently held by Liberal Louise Markus.

But first, something rather different. The Prime Minister yesterday released the first pictures to show a one-on-one interview this campaign — with Marie Claire. The PM’s official photographer, Sahlan Hayes, uploaded this to his Instagram yesterday — Turnbull is speaking to mag doyenne Jackie Frank … 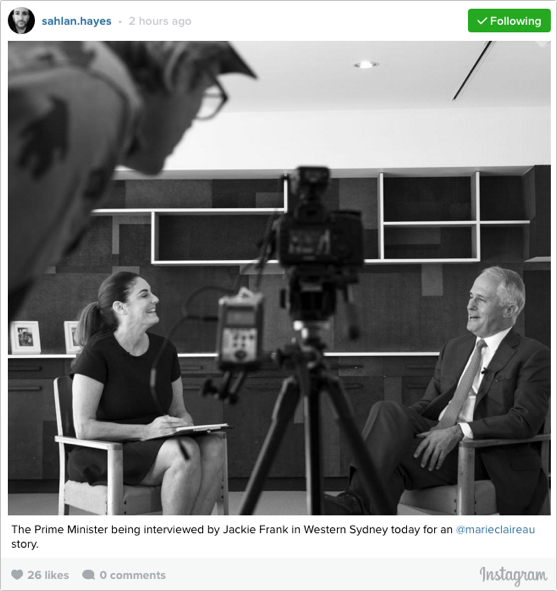 The piece will be out in Marie Claire’s July issue, which is out June 9. It will also feature a similar interview with Bill Shorten, who sat down with Frank three weeks ago. While Turnbull’s choice to speak first to Marie Claire has been described as “unusual“, Frank told Crikey it was nothing new, as she’s interviewed all the prime ministers and opposition leaders going into an election for years.

“Women make up half the voting electorate. Why wouldn’t the Prime Minister want to connect with women in a very direct way? Marie Claire has that authority, reputation and respect, and also, we’re bipartisan … It makes complete sense.”

Frank says Turnbull and Shorten were asked about the gender pay gap, domestic violence, affordable childcare, women in detention and the environment, as well as about their guiding principles. While Turnbull looks chummy and relaxed in the photo above, Frank notes he was somewhat more guarded than Shorten.

“We did ask about Donald Trump. Bill Shorten’s answer was incredibly insightful, and he answered the question. Malcolm Turnbull wasn’t able, as the sitting PM, to give as candid a comment as Bill Shorten did.”

The first one-on-one interview published with Shorten this campaign is more traditional. On the passage of his campaign bus through the North Queensland city of Townsville, he urged the locals to vote Labor … 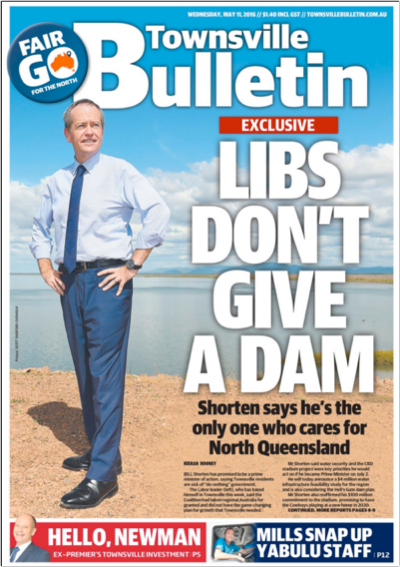 Even if the debate were on free to air, I would not watch. Lies that are known to be lies are just painful, especially repeated for an hour or so. And Shorten is not sufficiently charismatic to watch for more than a few minutes.

Not bad enough they get to edit “70”% of what we get to read in our viewspapers, you have to put money into Rupert’s coffers to watch it?

For those of us that don’t subscribe to “FUX News” we can rely on the likes of the Teletrash and the rest of Limited News to tell us “how it went”?
Today we have Murdoch Muppet Simon Benson regaling us with how the real estate “industry” is pooling funds to wage a war against Labor doing anything to negative gearing? Those altruists – what do they stand to gain from stopping that … besides a continuation of their inflated commissions off the back of inflated house prices? Does he spell that out? NFL.
“Your Voice Counts – But Not As Much As Your Commission”?

I find it quite offensive that our putative PMs lend any sort of credibility to the scum king’s private network. Given the massive unviewing/access why do they do it – was it just a shake-down run before they attempt to connect with real people?