Mind the Storrar: personal stories humanise policy, but there are risks

The media loves a case study, but it's the "everyday" example who faces the blowback.

It was straightforward enough. But what made it unusually compelling was that Storrar tied it to his own experience:

“I’ve got a disability and a low education, that means I’ve spent my whole life working for minimum wage. You’re going to lift the tax-free threshold for rich people.

“If you lift my tax-free threshold, that changes my life. That means that I get to say to my little girls, ‘Daddy’s not broke this weekend. We can go to the pictures’. Rich people don’t even notice their tax-free threshold lift. Why don’t I get it? Why do they get it?”

People ask politicians questions of fairness like this all the time. But Q&A, and most of the media besides, thrives on the personal. Had Storrar posed the question in a less personal, more academic manner, it would have been less compelling television. It probably wouldn’t have been picked by Q&A‘s producers.

But by posing the question based on his own life, he invited immediate feedback. While O’Dwyer answered the question in a detached manner (by talking about economics), her co-panelist, the Australian Industry Group’s Innes Willox, immediately turned the torch back on Storrar.

Storrar responded that he did pay tax — every time he purchased something. Willox appeared unprepared for this response. But what he was likely driving at, that Storrar would pay little net tax, was fleshed out in the coming days.

The exchange was highly compelling and widely covered in the media. “Quintessential Aussie battler, Duncan Storrar stole the Q&A show,” said Fairfax’s incorrectly punctuated blurb on a video of the exchange.

Before noon on Tuesday, Fairfax’s Michael Koziol and Daniel Cherny had found Storrar and prompted him for further details about his life. And why not? Courtesy of his appearance on Q&A, Storrar was now at the centre of the media cycle. Their treatment was sympathetic. But by Wednesday, The Australian splashed with Storrar on its front page, after visiting him at his Geelong home. And its treatment was more sceptical. 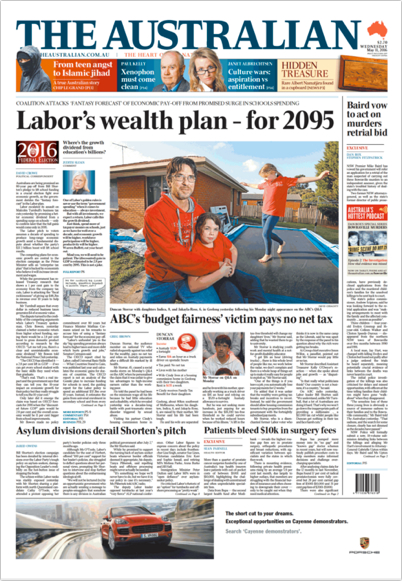 It noted in its title that Storrar (or as it dubbed him, the “ABC’s ‘budget fairness’ victim”) would have likely paid no net tax. Reporter Greg Brown’s piece, like Fairfax’s, extensively quoted Storrar, who had invited him into his home. But the setup was more sceptical, and was quickly derided on social media for its perceived callousness. The headline, on the front page of the country’s most influential paper, certainly made Storrar the enemy. And The Australian wasn’t done.

As a result of Storrar’s appearance, a petition had been launched to crowdfund to support him. Tens of thousands of dollars were raised. Storrar’s estranged son, Aztec Major, told The Australian‘s Caroline Overington that he didn’t think his father deserved the money. He painted Storrar as a deadbeat dad who took drugs and got his own son addicted. This time, Storrar didn’t answer the Oz’s request for comment. 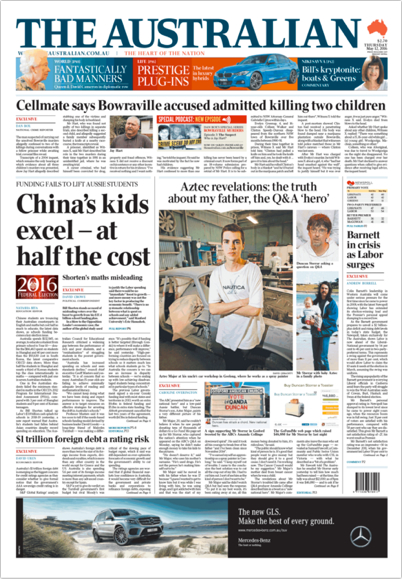 Storrar was not a member of the deserving poor, the piece implied. His own actions had gotten him into his situation.

This morning, the blowback got worse. Storrar’s police record was revealed in the Herald Sun and The Australian. It is reported he’s spent short stints in jail, for threats and assaults. Not only is Storrar undeserving, he’s now a “villain”, wholly unworthy of our sympathy for his difficult financial situation. 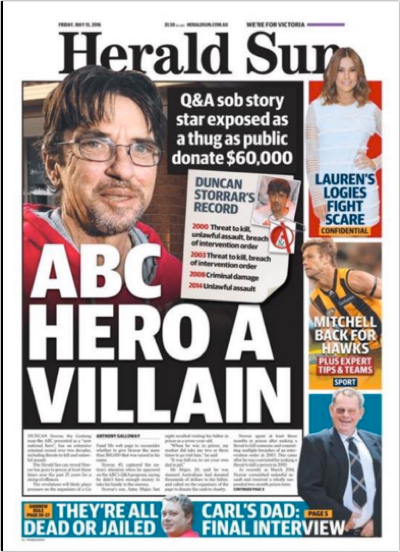 This morning, Melbourne ABC host Jon Faine rounded on Herald Sun editor Damon Johnston over the cover, accusing him live on air of “bullying” a “vulnerable individual”. Johnston defended the coverage by saying: “if you’re going to be on the national stage in the middle of an election campaign…I think you’re entitled to be subject to a bit of scrutiny. It was all part of legitimate public debate.”

Despite having featured Storrar for two days on its front page, The Australian‘s editorial yesterday claimed that “Storrar is not the issue — we wish him and his family the best”. It goes on to make an abstract argument about Storrar’s wish for the tax-free threshold to be raised. “[P]utting fairness aside, unless more are encouraged to become contributors, this envy-driven emphasis on wealth redistribution over wealth creation can only become financially unsustainable,” it states.

So Storrar’s persuasive plea for himself and others like him made him a hero — then he was cut down, brutally, on the front page of Australia’s top-selling newspaper. And that was fine, because he was now “on the national stage in the middle of an election campaign”. It’s an extreme example of a sadly common outcome of the media’s relentless desire to make things relevant to readers through personal case studies.

One only has to think of the young home owner profiled in Domain who within hours was revealed on social media as the scion of wealthy parents, happy to put down a deposit. Or the business owner asked to respond to a new government policy, only to have his social media accounts quickly pilfered for embarrassing associations that undermined his impartiality.

Yesterday, a single mother confronted Turnbull about tax benefits for families. “The cost of school is going up and up and up and yet we’re not getting any more money and now you’re going to take the family tax benefits away. It’s not just single mums you’re hurting,” said the woman, identified in the press only as “Melinda“.

Already the Greens have sent out a press release saying that they “stand with Melinda” (politicians are major fans of ‘case studies’ too). Maybe she’ll soon be profiled in the papers. And once a public figure, perhaps skeletons will be discovered in her past. People’s lives are never simple — no one is the perfect example.

People interviewed as subjects of government policy often do not ask to be highlighted by the media. They are sought out by journalists who want to make their stories about government policy relatable. For all society complains about the press, people have a remarkable willingness to help reporters; if asked, most will agree. It’s not clear how many realise the risk they are taking. The media would be less interesting, and less relevant to its readers, if it didn’t personalise the abstract. But when an issue is contentious, it’s the civilians interviewed who face the blowback.

In ‘no angeling’, are we telling important stories, or preying on the vulnerable?

I don’t think you’re trajectory is quite correct: progressives immediately embraced the inept vacuousness, and callous arrogance, of the O’Dywer and Willcox responses to an honest gripe, while Conservatives immediately had their hackles up to a challenge to their trickle down paradigm of leaners and lifters. The only thing that changed with time was the volume with which each put its case! If anything, the episode underlines that class lines are etched deep into the Australian political landscape.

Despite having featuring Storrar for two days on its front page, The Australian‘s editorial yesterday claimed that “Storrar is not the issue — we wish him and his family the best”. It goes on to make an abstract argument about Storrar’s wish for the tax-free threshold to be raised. “[P]utting fairness aside, unless more are encouraged to become contributors, this envy-driven emphasis on wealth redistribution over wealth creation can only become financially unsustainable,” it states.

As usual, indistinguishable from satire.

As a matter of interest, for those who have the stomach to read newspapers, did even one of them actually discuss the fundamental principles raised – tax breaks to low income earners are both morally and economically superior – or were they all solely focussed on Duncan’s sordid (or not) past ?

Typical of 21st century ‘journalism’ – the Oz media concentrates on the personality aspect of the story rather than the economic & social consequences debate around the disadvantaged.
Has a commercial production company approached Storrar for a reality show yet? It won’t be long, stay tuned. Or has Sixty Minutes already snapped him up?

Storrar responded that he did pay tax — every time he purchased something. Willox appeared unprepared for this response. But what he was likely driving at, that Storrar would pay little net tax, was fleshed out in the coming days.

I think what Innes was actually expecting Duncan to say is that he earned less than the tax-free threshold. I have to admit I gave Duncan a mental round of applause when he shifted the focus to the GST and other taxes.

And every time he walks down a footpath, drives down a road & visits the doctor etc etc…. he gets a benefit from those who pay tax….this kind of cyclical discussion is bullshit.

His rent would be contributing to the rates paid to councils to build the footpaths, his consumption is taxed and paid to the state governments that do a lot of the rest. If he drives he pays fees for road use, and the medicare levy. Also none of these things are negative taxes

What do you mean by a ‘negative tax’?

But Duncan can shop where all the poor people shop do, and not have to pay the prices that people like Willox and Murdoch’s minions (busy doing their job, defending a Limited News Party government against all comers) do – so his dollar would go as far as all theirs?