Wheels fall off campaign buses. After yesterday fell apart for Bill Shorten on the campaign trail courtesy of errant candidates on asylum seekers and a highly damaging outbreak of speculation about a deal with the Greens — fanned entirely by the Greens themselves — today went a bit pear-shaped for Malcolm Turnbull. He was meant to spend the day out in Fiona Scott’s seat of Lindsay, in far western Sydney, which Labor needs a 3% swing to win back. The train trip out to Penrith was fine, according to the Prime Minister, but things went badly after that. First, Turnbull was grilled about education at a community centre visit by a local businesswoman — not his favourite topic given Labor is campaigning heavily on it. Then he was forced to make policy on the fly when he was asked about possible changes to the retrospective superannuation changes announced last week, which Julie Bishop yesterday flagged would be the subject of consultation. No changes, Turnbull declared, which renders any consultation rather moot and actually makes the government’s problem on the issue worse — and which is going to be overtaken by events because there’s no way that policy will remain intact.

Turnbull then tried to explain the super changes and produced an epic 300-word answer that would have been impossible to shrink to a soundfeast, let alone a soundbite. Then journalists zeroed in the main issue in Lindsay — the hostility of Abbott-aligned Liberal forces in NSW to her support for Turnbull during the leadership contest last September — and Scott’s unwillingness to say whom she supported. Turnbull also lauded Scott’s intellect (yes, really). But Scott, when invited to discuss superannuation, immediately deferred back to Turnbull, leaving the assembled throng none the wiser about the powerful intellect she wields. The Turnbull camp evidently decided discretion was the better part of valour and cancelled the following event, a walkabout at the local Westfield shopping centre. They were running late for other events back in town, was the official explanation. Quite.

That’s not a DM. In what we are calling “Deeply Off the Record Part 2“, Labor MP for the Victorian seat of McEwen Rob Mitchell has shown his hand with this tweet that obviously should have been a direct message:

The tweet, which has now been deleted (but not after quite a few hours), references Neil Barker, the Greens candidate in the ultra-marginal seat, which Mitchell holds by 0.15%. It comes at a bad time for the Labor campaign, which spent day two of the campaign hammering both the Greens and the Liberals over an unconfirmed preference deal.

Mitchell has since tweeted that we should relax about the tweet:

Say what you mean. Secretary of the Department of Immigration Mike Pezzullo gave the latest address to the Institute of Public Administration Australia’s Secretary Series yesterday morning, imploring mandarins to get rid of old rules in order to form better policy and administration. The secretary of the notoriously secretive Immigration Department, which has blasted journos for reporting on asylum seekers kept in detention, had a lot to say about communication:

“We should insist on effective communication. In all of our work we should reject jargon, imprecision, hackneyed phrasing, woolly terms, padding, and unclear thinking and language. All of our work requires clear, crisp, meaningful and expressive communication. Written and oral communication should be clear as to the following: how does what is being proposed flow logically from first principles? What are the relevant facts and relevant evidence? What analysis has been done? Which courses of action have been considered? Which is favoured of those courses and why? Clear language should reveal all of this, and it should be insisted upon.”

We couldn’t help but wonder if the media department in his own agency has heeded this advice. Last week an agreed statement between the department and Save the Children used this many words to say that they had wrongly accused Save the Children staff of encouraging asylum seekers to self-harm:

“The Department indicated through public statements that in making the removal direction, the Department relied on allegations that the staff had orchestrated protest activity, coached and encouraged self-harm of detainees, engaged in a campaign to cast doubt on the legitimacy of the Government’s regional processing arrangements and misused and improperly disclosed sensitive and confidential information. …

“The review encompassed the circumstances in which the direction was given, including the alleged conduct of the SCA employees who were removed.  Consistent with the recommendations made by Mr Moss, the details of the allegations, insofar as they related to employees of SCA at the time, were the subject of another independent review commissioned by the Department in May 2015 (Review of recommendation nine from the Moss Review by Adj. Professor Christopher Doogan).  Professor Doogan concluded that the information available to the Department at the time of the removal direction did not warrant issuing the direction.”

“Public service writing should be clear and direct, active and accountable. Sentences should be action-orientated, lush with verbs. We should use doing words because we are doers, or we should be. The active voice should be the grammatical standard: ‘I decided’, rather than ‘it was decided’. Insist on your staff writing competently, succinctly and accurately.”

Active and accountable? This from a department that will only ever be quoted as a “spokesperson”, never with a name.

Paterson and his phone. Mobile phone reception at Parliament House has long been a bugbear for MPs and journalists, and new Senator James Paterson has wasted no time in trying to do something about it. In last week’s Senate estimates hearing covering the government’s mobile black spots program, designed to help rural areas with no phone reception, Paterson asked acting deputy secretary Richard Windeyer if Australia’s home of governance could get in on the program:

Senator PATERSON: I just have one quick follow-up question. Would Parliament House be eligible for the Mobile Black Spot Program?

Senator PATERSON: I am seriously struggling with my reception–

CHAIR: You are not the only one!

Senator PATERSON: I am new, so it is frustrating me very much!

Mr WINDEYER: I know, it is–

CHAIR: In fact, I have one bar at the moment on my–

Senator PATERSON: Yes, I have one bar too. We are lucky that we have one!

Mr WINDEYER: I am sorry; Canberra is not a regional location–

Senator PATERSON: It is the ‘Bush Capital’!

While Paterson and other pollies will have to deal with one bar of reception, Australians in rural areas will at least get mobile reception the next time there’s a bushfire threat.

Turnbull on the Bolt Report? It’s not exactly Gladstone and Disraeli, but Australia’s party leaders (both of whom were shunted into that position by their respective parties, over the will of the people) will have their first debate on Friday. 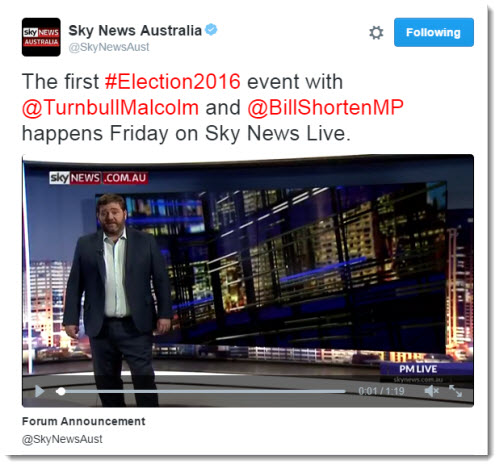 We in the Crikey bunker were concerned that this dull gabfest (“Jobs and growth!”) (“Putting people first!”) was going to kybosh our very important plans of watching the Eurovision semi-finals at 7.30pm, so we checked in with Foxtel to make sure the bloviating was not going to ruin our night. But it seems Sky hasn’t yet told Foxtel to mark the historic meeting of the minds in the TV guide:

It’s just The Latest with Laura Jayes from 6pm to 7pm, and then The Bolt Report from 7pm. Then again, maybe it’s not an error after all. Perhaps Sky’s newest, whingiest host just wants his shot at the leaders, after lamenting bitterly that Malcolm Turnbull was refusing to appear on his show. Will Bolt wait in the wings for an hour and then take over?

Caretaker ties. What do Canberra’s public servants do during the caretaker period? According to public servant Aaron Kirby it’s a “liminal netherworld where no major decisions can be taken. Things relax a bit. And maybe you can let your freak flag fly a little.” So Kirby is using the extended caretaker period to both raise his freak flag and raise money for the Against Malaria Foundation, by wearing a different ugly tie every day. 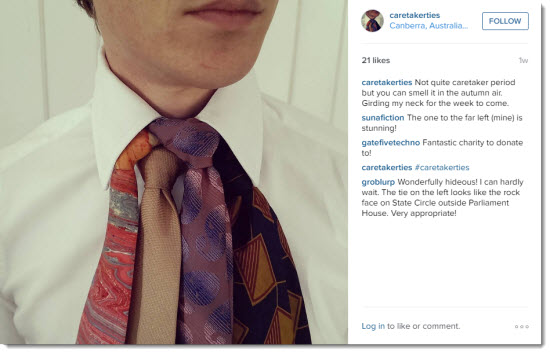 According to his Chuffed fundraising page, “Since I’m not going to be meeting anyone important during the caretaker period I’m going to let my normally exacting standards of dress slip somewhat and wear the ugliest ties I can. The ties that lurk in the back of the wardrobe. The ties that languish on the shelf even in the op-shop. The ties your grandpa wore when he was feeling frisky.” 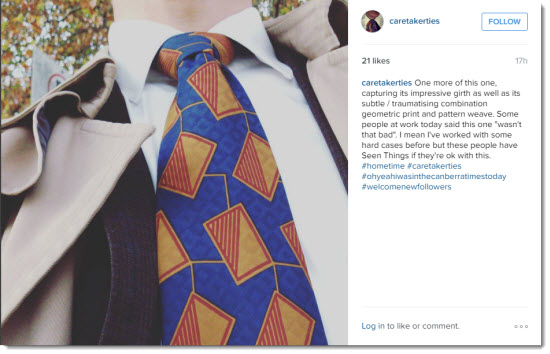 The page has so far raised $539 of a $10,000 target. But like the campaign, it’s a marathon, not a sprint, and all the ties are documented on Facebook and Instagram: 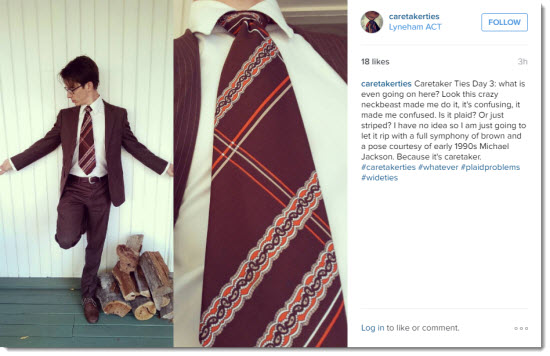