Isentia Index: Who won the first week? Was it Masterchef or the Voice?

The election campaign has only just kicked off, but voters are already fatigued.

Despite the official election campaign finally being underway, and media coverage increasing, particularly for Opposition Leader Bill Shorten, there hasn’t been much discernible increase of comment out there across our wide brown land. With two moderately boring, centrist party leaders who seem to mainly bring out feelings of mild disappointment in the average voter, if they think about them at all, this certainly ain’t an Abbott v Gillard type election. Will eight long weeks of campaign get something through to the voters? Jobs and growth? Education and fairness? I wouldn’t bet on it.

Shorten is actually ahead in volume on both social media and talkback, and even receiving relatively favourable sentiment on both. Is he seeming prime ministerial? Way too early to tell on that one perhaps, but the level of civility towards both leaders compared to the way former PMTony Abbott was treated on social media and fellow former PM Julia Gillard was treated on talkback at least seems like a step forward.

Finance Minister Mathias Cormann jumps in to the top ten as the main campaign spokesman for the Government, while PUP leader Clive Palmer shocked almost no-one by announcing he would not be standing for Fairfax again. We did but see him passing by.

And what of the budget? Did it sink without a trace? Not quite, but discussion of income tax changes, company tax changes and superannuation changes was at a pretty low level, with only the PaTH program and the lack of a change to negative gearing seeming to get much traction at all. 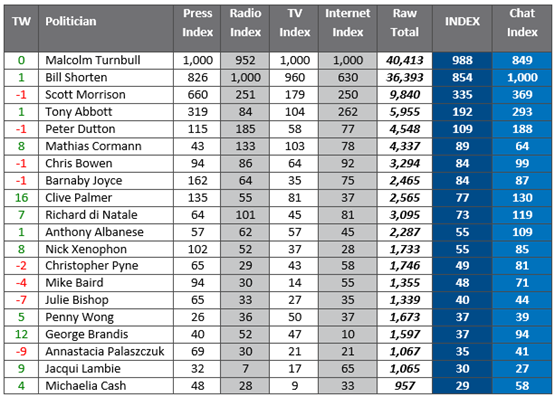 Bill Shorten well ahead on social media, including a fair bit of criticism from the left on asylum seeker policy, but overall still far more favourable than the once-time social media darling Malcolm Turnbull.

Shorten was even ahead on talkback, with Sydney commercial station callers in particular still deeply under-enthusiastic about the current PM, and slightly warming to the only alternative currently available, while still hankering after those golden days of knighthood.

The Bogan Oscars continued its search for relevance, with Gold going to Waleed Aly, even though surely almost no-one could have survived watching all the way through the telecast before he finally got to embarrass some viewers with his inappropriate hue and brightness.

Good on Bill Shorten…at least he makes more sense than the waffle from Talcum!