Independents’ day: the seats to watch

Which independents have a shot at getting over the line?

Australia has long had a history of a select few independent candidates overcoming the major parties, but who should we look out for this election? They are mostly old faces and have generally been aligned with the major parties at some point in their careers, but how do they differentiate themselves from the pack? And what can we expect from them?

Dennis Jensen. Outgoing Liberal MP Dennis Jensen announced on Monday that although his party had decided that he would be outgoing, he thinks that he can retain the seat of Tangney as an independent but also remain a member of the Liberal Party. The Western Australian lost Liberal preselection this year after a salacious excerpt from his novel was leaked to the media, and since then he’s taken aim at the party, and especially Finance Minister Mathias Cormann, tweeting: “If Corman [sic] was more more focussed on his job as finance minister, and less as powerbroker arranging preselection, would be less deficit.” On Tuesday Jensen posted to Facebook:

“There is some confusion about my Liberal Party membership, with no official communication from the machine to let me know of my status. Some are saying that I ceased to be a member yesterday when I announced my independent candidacy; however the Liberal Party constitution states I should be notified in writing, and that I then have the option to appeal the ruling.”

Jensen has also blasted the party on policy issues, calling the retrospective aspects of the government’s superannuation changes “disgraceful”. While he may make a lot of noise, we don’t rate his chances against the Liberals’ Ben Morton.

Cathy McGowan. McGowan capitalised on the “anyone but Sophie Mirabella” sentiment in the Victorian seat of Indi in 2013, and it looks like she is here to stay. McGowan’s profile has grown during her term, and her kitchen-table meetings and strong local presence have been emulated in other campaigns. The seat of Indi covers a huge geographic area in Victoria’s north-east, and while it had been a safe Liberal seat until McGowan came along, there are some in the Nationals who see it as their turf. McGowan faces a three-cornered contest between Mirabella and the Nationals’ Marty Corboy. Mirabella’s battle was always going to be uphill, but after telling Sky News that the Wangaratta hospital had missed out on $10 million in funding because she wasn’t elected, she’s been declared “cooked“.

Tony Windsor. Like Jensen and McGowan, Windsor is no stranger to Canberra, representing the seat of New England from 2001 to 2013, and like many independents, Windsor was previously a member of a political party before going it alone. Windsor was originally the Nationals candidate for the state seat of Tamworth in 1991 until a drink-driving incident caused the Nats to disendorse him. He was elected anyway. A popular local, Windsor is taking on Deputy Prime Minister Barnaby Joyce, and he is campaigning on issues like the Gonski funding program for schools, the NBN and mining on agricultural land. One of Windsor’s secret weapons might be his social media-savvy dog, Mack — particularly given how Joyce feels about dogs. 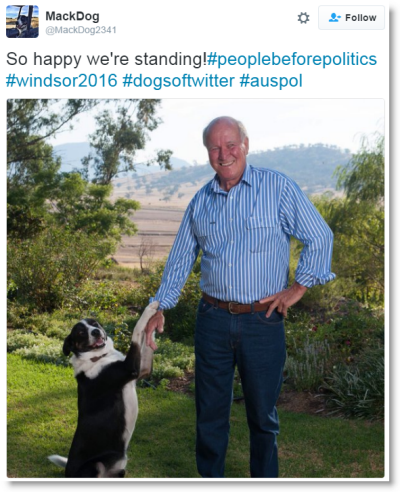 Stephen Mayne. Another familiar face attempting to make a mark is Stephen Mayne (founder of Crikey), with his challenge to former defence minister Kevin Andrews in the safe Liberal seat of Menzies in Melbourne. Mayne is positioning himself as a pro-Turnbull independent, trying to tap into Liberal voters disaffected with Andrews himself. Mayne’s move follows the patterns of many independents, running against parties with which they have ideological and historical ties, but issues with the actual local candidates.

Nick Xenophon. Can Nick Xenophon still be included in this list when he is likely to be leading a band of Xenophons after July 2? The Senator from South Australia has been a strong opponent of gambling and is the king of the media stunt for maximum attention. At the 2013 election Xenophon was elected to the Senate without the help of preferences, with his offsider Stirling Griff almost joining him with a second quota. With a double dissolution this time around he is likely to be joined by at least one other senator from South Australia, and with candidates running in the lower house in South Australia, Victoria, New South Wales and Queensland the Nick Xenophon Team will be a force to be reckoned with.

Bob Katter. The outspoken north Queenslander rarely seen without an Akubra is running again for the seat of Kennedy, and he has given voters there little reason not to vote for him. While a conservative, Katter has slammed the government for failing to deliver on its promises for north Queensland. He says the government hasn’t made any effort to re-open Queensland Nickel or gets defence contracts for Cairns. He posted to Facebook on Monday:

“On Budget night we searched for over an hour for the Hann Highway . It’s not there, it’s not a budgeted item. The Government will promise the Hann to us in this election. Count on it. So the Hann will be just another politician’s pork barrelling pre-election promise. If you go to an election saying ‘I’m Gunna Do’ then what you’ve actually said is, ‘I haven’t done it, I’ve had three years and I haven’t done it’. Well too late now sonny.”

Nothing about Andrew Wilkie?

Could Crikey please provide a list of where Xenophon’s votes have gone in the Senate. I agree that he “is the king of the media stunt for maximum attention.” But my feeling is that he mostly votes with the LNP and scarcely deserves the label of independent. But maybe my feeling is incorrect.