Voters unmoved by budget, but it’s stopped the rot for the Coalition

While voters are broadly unimpressed by last week's budget, individual measures have their support -- and the momentum against the government has halted.

The 2016 budget has underwhelmed voters, but the recent momentum against the government has halted, today’s Essential Research poll shows. 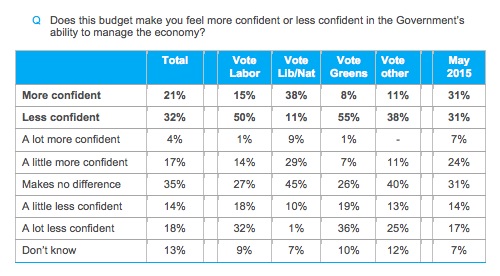 That again compares poorly with Joe Hockey’s last budget in 2015, and again it’s the tepid reaction that stands out: 45% of Coalition voters say it makes no difference to their confidence and only 38% say it makes them more confident.

There was a similar lack of enthusiasm in voters’ perceptions of who benefited from the budget. Just 15% said it would be good for them personally, while 26% thought it would bad or very bad — but 48% said neither good nor bad. It was a slightly better result on “average working people” — 21% said they thought it was good for that group, but 35% said it was bad and 33% neither good nor bad. Small business and big business were both perceived to have done very well from the budget, along with “people who are well off” — indeed, the numbers are almost the same for those three groups — around 50% say those groups did well and around 10% say they did poorly.

However, people on lower incomes, families and older Australians were all seen as doing poorly, although the result is more mixed on younger people — roughly a third of voters thought young people did well out of the budget, another third thought they did badly, and the final third thought neither. On the positive side for the government, however, 28% believe the budget is good for the economy overall, compared to 22% who say it’s bad for the economy and 35% who think it is neither.

Those results put last week’s budget about on par with last year’s budget — with two significant exceptions (in addition to small business being widely seen as a big winner last year). Fifty-one per cent of voters believe the budget was bad for older Australians, including 20% who say it was very bad — a result almost certainly of the government’s superannuation tax changes. That makes the budget a lot more like the 2014 budget (10% good, 66% bad for older people) than last year’s (20%/34%). And 50% believe the budget is good for big business, courtesy of the huge tax cut the government is planning to hand to big business over the next decade.

As a result, 61% of voters believe the budget favours business over workers. Against that, the government is hoping that its crackdown on multinational tax avoidance will allay concerns it is too close to the top end of town.

But 57% of voters think it doesn’t go far enough in that regard. And 46% disagree that the budget is “fair and balanced”.

But when voters are asked about individual budget measures, things start to brighten for the government. Voters are divided 43%/44% on whether tax cuts for people over $80,000 are a good idea, and they strongly disapprove of the government’s cut of $1.2 billion to aged care providers. But the increase in tobacco excise is supported 72%-21%, superannuation tax concession changes are backed 62%-21%, low-paid internships for young unemployed backed 69%-14% and the government’s proposed multinational tax avoidance taskforce gets a whopping 82% support. Even the company tax cut is supported 50%-34%. And the budget also lifted the profile of Treasurer Scott Morrison — he’s forged ahead of Chris Bowen in terms of trust to handle the economy — he leads 31% to 20% compared to 26%-23% in April.

What does all that mean? Voters have mixed feelings — the overall budget leaves them unimpressed, but when quizzed about individual measures, they are more supportive, suggesting there’s an opportunity for the government in its election campaign to make sure voters know the detail of the budget around popular measures. This may be the sort of budget that voters warm to in the coming weeks if the government can get them to focus on it.

And most importantly, the budget hasn’t done anything to harm the government. After an extended period with a trend away from it, there’s finally some good news for the Coalition. On voting intention, its primary vote has picked up two points to 42% while Labor is steady on 38% and the Greens remain on 10%. The two-party preferred result is 51%-49% in favour of Labor, the first shift in the government’s favour in weeks. Has the fightback begun?

Essential: everyone thinks the budget will be bad for them

That has to be about the most stupid poll I have ever read.
How can people DISLIKE the budget SO much…then say they have increased trust in Morrison’s ability to manage the economy (Bowen is light years ahead of Morrison for those with more than half a brain)…and then INCREASE their vote for the Coalition?
Think Essential needs to get another set of respondents. This lot don’t even make sense…living in cloud cuckoo land!!
And your final question Bernard: I sincerely hope the fight back has NOT begun…the thought of another three years of this motley crew, fills me with dread!!

Is this what you want Bernard? A fightback by the government.
Has the rot really stopped. Your article is all about the lukewarm – to put it mildly – response to the Budget, yet your conclusion is to wonder whether the fightback has begun. Strange.

Bernard has changed his tune in recent weeks. Gone are the challenging questions about the economic policies of the government. Instead we have a poorly received budget embraced for including some “popular” measures. The hand of the MSM lies behind the popularity of giving employers the chance to sack existing workers and replace them with lowly paid unemployed workers. Readers of MSM were no doubt told that this will help the young unemployed get jobs. Yes, and most of us wish the young unemployed could get jobs and a few of us accept that the best way of doing this is not shuffling wages lower than they are but by borrowing or printing money for infrastructure investments that will increase activity and employment. Unthinkable, of course, for neo-liberals, whose camp Bernard seems to have joined without reservation.
In the end, MSM, joined by Crikey, is unfortunately likely to con enough of the public into accepting the bundle of nasties all tied up and obscured within their “economic plan,” a plan for “jobs and growth” that is unlikely to produce anything but a further shift of income and wealth from poorer Australians to richer Australians and overseas shareholders.

#IStandWithDuncan, no negative gearing reform, unfair tax cuts and lack of education and health funding, cuts to CSIRO and no action for Climate Change in the budget. The stink of the 2014 budget was overlooked by the MSM for a long time too – now it is received wisdom. Interpreting the polls by the budget is a fool’s game. Jobs and Growth will be revealed over coming weeks to be a mirage and trickery.