Di Natale digs himself into a hole ... Rockety McRocketface ... crowdfunding to oust Tony ...

Election wrecks everything. The early election campaign has caught no one by surprise, with July 2 pencilled into our diaries since the Herald Sun’s Ellen Whinnett broke the story in February. But just because it’s been expected doesn’t mean that the election campaign isn’t messing with well-laid plans.

The Parliamentary Friends of Shooting group has cancelled its event scheduled for June 24. The parliamentary friendship group, supported by the Sporting Shooters Association of Australia and the Shooting Industry Foundation of Australia, had invited MPs and media to the shooting event, to be held at the Jim McKinley Range at the SSAA’s ACT Majura Shooting Complex. The Parliamentary Friends of Shooting group was launched last year and is chaired by Nationals Senator Bridget McKenzie and Labor agriculture spokesman Joel Fitzgibbon, but now we won’t get to see their skills until after the election. The annual Midwinter Ball, hosted by the parliamentary press gallery to raise money for charity, has also been postponed, to be held when all this democracy kerfuffle is over.

And the first howler of the campaign belongs to Greens leader Richard Di Natale. In his response yesterday to the calling of the election, Di Natale let this pearl drop:

“On a day when Bill Shorten is out at a mine, kicking off his election campaign we say, ‘No more new coalmines if we are to make the transition to a 21st century economy and save the Great Barrier Reef.’ We are here with the community, so we stand as Greens with the community on the first day of the election campaign. You will see the two old parties standing with vested interests, saying, ‘Let’s continue to dig coal out of the ground.’”

Di Natale’s mining for turds. Opposition Leader Bill Shorten was indeed at a mine Sunday, or very close to one, because he responded to the calling of the election from Launceston, while on his way to Beaconsfield, about 40 minutes away, to commemorate the 10th anniversary of the Beaconsfield mine collapse, which killed one miner and left two others trapped for two weeks before they were rescued. So, not exactly Shorten launching his campaign from a mine. It might have helped make Di Natale look less of a dill if Beaconsfield were a coal mine, but, um, it’s a gold mine. Or, more correctly, it was a gold mine — it’s been closed since June 2012.

So how does Di Natale go on the fact check there? Shorten wasn’t kicking off his campaign there, Beaconsfield’s not a coal mine, and it hasn’t been open for nearly four years. Maybe the Greens leader should have spoken to his Tassie colleagues before opening his mouth?

Barnaby here, there and everywhere. Election campaigns are busy times, with party leaders flying across the country to cover as many marginal seats as possible. Nationals leader Barnaby Joyce is already racking up the miles, flying to the nation’s capital yesterday solely for the purpose of the election announcement. Here he is at the Nemingha pub (yes, at a urinal) on Saturday night: 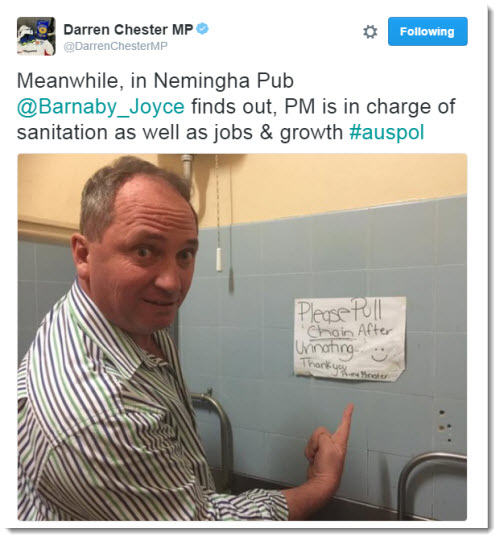 Here he is in Canberra in the afternoon for a press conference with Fiona Nash and a photo opp with Malcolm Turnbull: 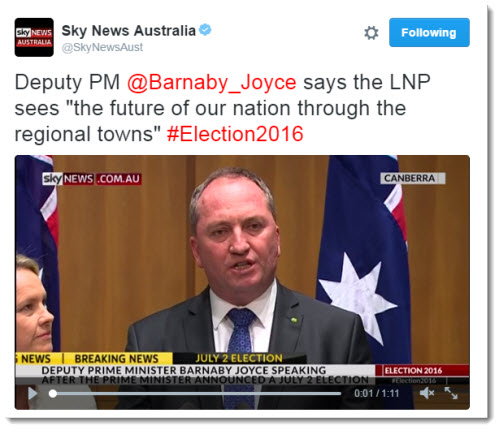 And back in Tamworth at the end of the day for the rugby league Country v City origin match: 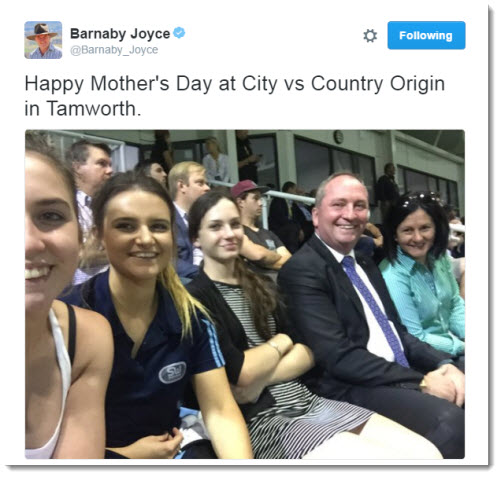 And that’s a perfectly legal use of taxpayer funds to get around the country.

Day dreams. South Australian Senator Bob Day could be about to pack up his office if he is not returned by South Australians at the election, but he won’t have to move too far if he goes back to his old job. The Family First Senator caused quite a stir in the Department of Finance when he was first elected, when he demanded that the Family First Kent Town offices, which he owned until shortly before his term began, become his new electorate office. Emails and letters released by the Department of Finance under freedom of information show that Day objected to taking over the offices of former senator Don Farrell because of a longer commute, and opined the Gilles Street, Adelaide, premises were “difficult to find … the office has no presence”. He also had a dig at Farrell, saying “I can understand why Senator Farrell may wish to have an office close to South Terrace in order to be near his Party colleagues, but this would not suit my needs for a number of reasons”.

Over January and February in 2014, Finance officials negotiated with Day that he would keep the Gilles Street offices until the end of the lease there, to reduce costs to the department. But by October of the same year, former special minister of state Michael Ronaldson agreed that the new senator could base his offices at Kent Town until June 2020, with the department not paying any rent until August this year or until the department subleased the Gilles Street office. Day describes the Kent Town premises, by the way, as the “conservative hub of Adelaide” — Liberal Senator Cory Bernardi used the studio onsite to produce his Cory Bernardi TV.

Rockety McRocketface. While we won’t get Boaty McBoatface, and Ice Ice Breaky is just a dream, internet pranksters have another chance to wreak havoc with a government agency, with the NBN offering the chance to “Blast your face into space“. The second Sky Muster satellite (a name chosen by public vote with less than inspiring results) will soon be launched, and selected photos will be used to create a collage to be placed on the rocket that will take the satellite into orbit. While we could think of many pictures we’d like to add to the collage, this caveat in the terms and conditions has put a dampener on our plans:

“They will not submit any material (Content) that is unlawful or fraudulent or that may be in breach of any intellectual property, privacy, publicity or other rights, defamatory, obscene, derogatory, pornographic, sexually inappropriate, politically incorrect, violent, abusive, harassing, threatening, racist, ageist, sexist, objectionable with respect to religion, origin or gender, not suitable for children under 15, or otherwise unsuitable for publication in the context of this competition.”

We do wonder who judges what is politically incorrect for the purposes of this exercise? Ms Tips wants to know: could we use the word “broken”?

Crowdfunding in Warringah. While Tony Abbott cut a lonely figure at Manly Wharf yesterday, he doesn’t have too much to fear when it comes to holding onto his local seat of Warringah, holding it by a 15% margin. His Labor challenger is trying to use the former Prime Minister’s national profile to mount a crowdfunding campaign to “stop Tony Abbott”. According to Andrew Woodward’s mycause campaign, he needs $20,000 to try and unseat Abbott:

“Tony Abbott actively campaigns strongly against everything I stand for. He is a spoiler, a trouble-maker and a zealot. It is wrong. He is a blight on Australia, Warringah, the parliament and on the standing of politics in Australia. He typifies everything that is wrong with the system.

I need help funding the production of information for voters, billboards, signage for polling booths and advertising on both the internet and in the mainstream media.  A great campaign that gives me a crack at beating Tony Abbott starts at about $20,000. The more we have, the better our chances. I can’t guarantee success. But I can guarantee a committed effort to try and Stop Tony Abbott.”