Waleed Aly did not save Australian television

Yes, it's remarkable that Waleed Aly won the Gold Logie. No, it does not mean Australian TV has fixed its diversity problem.

For those who were sensible enough not to tune in, here’s what you probably didn’t hear about last night’s Logie Awards: the Wagnerian broadcast ran for just under four and a half hours. Just shy of five if you include the half-hour red carpet special.

If there’s ever been a Logies ceremony more concerned with bolstering the reputation of the Australian TV industry and the ceremony itself, it must’ve been before I started watching the Logies.

The packages before each award were interminably long, with most presenters delivering a speech about the fine work of the field of nominees, followed by fairly lengthy excerpts from each program. The change of the “most popular” categories to “best” — meaning that awards were given for both “best actor” and “most outstanding actor” ended up being mostly confusing, rather than raising the prestige of the awards.

The musical performances — by Jimmy Barnes, Delta Goodrem and Conrad Sewell — were all fine, and there was one charming, apparently unscripted moment from Julia Morris. Noni Hazlehurst delivered a passionate, politically charged speech when she was inducted into the Hall of Fame, and Deborah Mailman and Alex Dimitriades won well-deserved awards as most outstanding actor and actress.

But the desperation to “celebrate” the achievements of the industry and build myths about its integrity and strengths made for four and a half hours of incredibly dull viewing.

You probably didn’t hear that, because the biggest news is that Waleed Aly won the Gold Logie for his work on Channel Ten’s The Project, becoming the first non-white winner of the award since it began in 1960. And he delivered a speech which didn’t just match that milestone, but exceeded it.

It was as moving a moment as you’re likely to see in any TV awards ceremony. It’s essential viewing if you haven’t yet watched it.

Aly refused to let the moment become an opportunity for the Australian TV industry to pat itself on the back for its diversity. We can certainly celebrate a breakthrough in these popularly voted awards which demonstrates, if anything, that commercial networks underestimate the majority of their audience. But this isn’t a time for any kind of industry self-congratulation.

Aly is clearly a deserving winner. His work on The Project is excellent: he’s a smart, incisive and charismatic host who manages to make the fast-paced “news delivered differently” format work as much as possible. Sure, The Project rarely rises above any news or current affairs program on commercial TV (and the absurdly short live interviews in which the entire panel lobs their own question to a guest have got to be the least informative and most banal segments currently on Australian TV).

But the show hits its stride when Aly makes complex issues easily digestible for a large audience in his “editorials”. Editorials which, over the last year, have almost certainly been viewed more than any other content created for Australian TV. His lauded “ISIL is weak” segment has been viewed more than 30 million times on Facebook; for an Australian Muslim man to frame the ongoing narrative about ISIL and its relationship to Islam with such clarity, before a large audience, is not insignificant.

The Gold Logie is an award simply for the most popular person on Australian TV — as determined by TV Week readers and people who choose to vote online (really not an award you’d want to spend too long defending the integrity of). To complain that Aly wasn’t worthy — as some within the industry did last month, when they were all silent on his white co-host’s win in 2015 — is a total nonsense and clearly demonstrates an underlying prejudice at play in the industry.

So what’s changed with Aly’s win? Probably not as much as many of us would like to believe. Commercial TV usually doesn’t reflect the diversity of this nation, and this win isn’t likely to inspire a massive shift. There would have been a lot of viewers of The Project who dropped off when Aly took over for the mere fact that a Muslim was hosting (whether they’d admit that or not). And in the commercial news and current affairs game, where the goal is to draw as many viewers as possible, executives and producers will almost always go with the safest option, which inevitably means the white faces we’re used to seeing on our screens.

Here’s hoping Seven and Nine will follow Ten’s lead and be open to more diverse appointments. But it’s going to take a lot more than one popular non-white host to change the decades-old white sea of breakfast TV, for example.

Aly’s win is important for the reasons he noted in his speech: it actually highlights that this is an industry (like many industries) in which people have to hide aspects of their identity to access opportunities. While Aly is the exception and certainly not the rule, it’s difficult not to feel a little bit of hope from his win.

If it can serve as a reminder of the shortcomings of Australian TV and a challenge for those in decision-making positions to be more representative, even better.

After four and a half hours of the Logies trying to convince its audience that Australian TV really matters, at the very last minute Aly’s win became the most convincing argument. 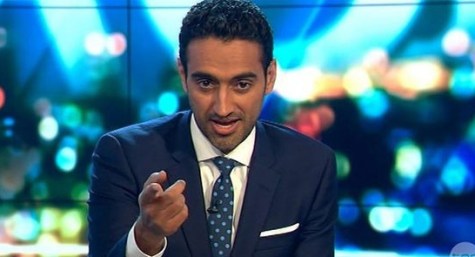 Stock the fridge with festive ale

Waleed Aly deserved the Logie & delivered a meaningful, thoughtful acceptance speech. He shone in a venue bulging with cheap glitter.

When 7.30 was looking for a new host after Kerry O’Brien’s departure I suggested Aly. His skills at interviewing politicians are under utilised. His editorials are excellent.

Ok, then Zut. If you agree that to be deserving of a logie, you need to bully, harass, misrepresent and offend the notion of free speech with no obligation to journalistic integrity then you might be right. Because that’s exactly what Waleed Aly did to Paul Moder. Parroting the official line with the rest of the suckholes will always win you a logie. The “Project” – I never miss it. I never watch it so I never miss it.

So who the hell is Paul Moder?
He must be very prominent…since I’ve never heard of him!
Some RWNJ perhaps????

Zut Alors:
With Aly’s march into tabloid fame via this silly Logies system, he would make a perfect replacement for Kerry O’Brien – that doyen of Aussie State sponsored MSM…..Kerry knows the drill…..don’t mention Australia’s client US State status, the US State Department’s evil modus operandi globally (e.g. the current destabilisation of both Venezuela & Brazil’s political systems, or the wanton destruction of Libya) or the Israeli Government’s illegal occupation more than say briefly, once every 9 months or so…and give the Israeli PM a free kick interview when he visits Australia – no difficult questions though…….and dare not speak about the rise of the BRICS group emergence etc etc etc …ad nauseum.

For the record, all Aussie MSM including UnFairfax, the ABC, Limited News, SBS and all the commercial TV stations, are State sponsored….jelly back servants of the US oligarchs.

O how I admire the Aussie MSM…….