It ain't easy for the papers to report on the Logies ...

Of all the country’s major papers, only the Herald Sun chose to put the Logies on its front page today (some minor political news got the splash everywhere else). But who’s missing? Eyebrows have been raised over the fact that Gold Logie winner Waleed Aly’s mug is absent from its collage … 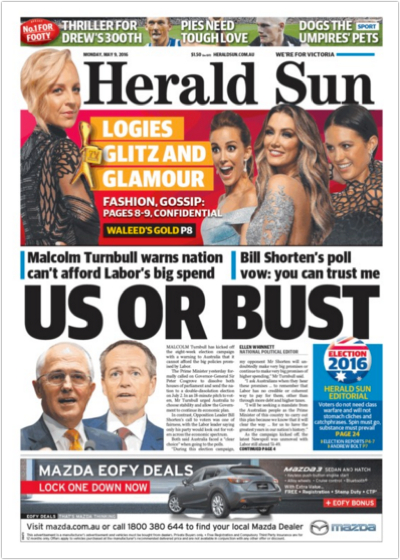 The text on the page did direct readers to an article on “Waleed’s Gold” on page 8 — the paper’s report on the Logies led with his victory (there’s a tiny picture of him down the bottom of page 8 too). But why the front-page snub? Did editors think a quartet of pretty women more likely to move copies that Aly? Or were they reluctant to prominently feature a columnist for fierce rival Fairfax?

In the Hun’s defence, it is possible the announcement just came through too late to rejig the front-page graphic. The Gold Logie winner, whom voters decided on in January, wasn’t announced to the public till well after 11pm — well after the first edition deadlines. Aly’s Project co-host Carrie Bickmore, prominently featured on the splash, has won the Gold in the past and was as good a bet as any to take it out again (a caller to Triple M claimed on Friday that she’d take the Gold — the “leak” was off the mark).

Reporting on the Logies has been hard for print papers in recent years. In 2013, The Australian published a piece on Gold Logie winner Asher Keddie before the embargo lifted due to a “production error”. Bauer weekly titles publisher Jayne Ferguson responded with a statement saying that in order to prevent a repeat, “moving forward, all media outlets will find out who all TV Week Logie Award winners are in line with the telecast”. There’s still no embargoed lists of winners given to media outlets, despite lobbying by many of the country’s showbiz reporters. That’s probably why The Age, for example, managed only a report on the frocks in the print edition, but not the winners themselves.