The big question of this election campaign: whether Bill Shorten can defeat Rupert Murdoch. 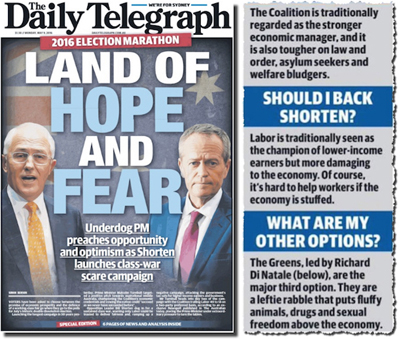 Ted Cruz didn’t say very much that was intelligent in his failed run for the United States presidency, but he wasn’t wrong last week when he said:

He’ll try again, at least. And he’s succeeded before.

If the Murdoch stable is the least trusted media according to focus groups, why is it then that voters believe what Murdoch tells them and vote the person he wants in who serves his interests (and not theirs)?

Maybe voters don’t take much notice of Murdoch. Maybe all this “Murdoch brainwashes stupid voters into electing his puppet candidates” is complete and unadulterated rubbish. Maybe Crikey is already writing the reason for the ALP loss 7 weeks out by starting the meme that it was Murdoch that did it.

Maybe voters make up their own mind. I’ll tell you one thing. Losers blame Murdoch. It’s a form of denialism that they didn’t cut it out there in voter land and Cruz is just another loser.

Lack of competition – while they get to edit what we get to see.

Will he hurry up and shuffle off this mortal coil already?

Things will only become worse when Fairfax stop printing SMH and The Age in the next year. Murdoch has a free run then.

Don’t know, possibly because he has the support of those dreadful shock jocks.
He wasn’t initially happy with Turnbull I think, but has accepted that this is his lot.