Crikey Campaign Scorecard: and we’re off!

Bernard Keane, Crikey politics editor: Malcolm Turnbull is PM and starts from a position of incumbency, controlling the timing and theatrics of the opening exchanges. As Opposition Leader, Bill Shorten is necessarily reactive. Beyond this point, however, the only benefit of incumbency is that Turnbull can draw on Finance-approved costings for his budget announcements. He and Shorten are on equal footing.

Norman Abjorensen, visiting fellow at Australian National University, former Liberal speechwriter and author of the new book The Manner of Their Going: Prime Ministerial Exits from Lyne to Abbott: At this stage, Labor looks like it has the edge, with the recent polls showing a trend in its favour, suggesting many people might already have decided how they will vote. Bill Shorten has grown in the job and now looks assured, competent and authoritative: a genuine and credible alternative prime minister. Labor’s measured release of policies has seen them roll out a plan for governing and the very plausible and articulate Chris Bowen’s superior communication skills in the economic debate so far are a big plus. The eight-week campaign would tend to be in Labor’s favour, allowing Shorten and his team an extended platform to chip away at the government — much as Andrew Peacock did to Bob Hawke in the seven-week campaign in 1984 (never again, said the political hardheads, but political memories are notoriously short).

Dennis Glover, veteran Labor speechwriter and fellow of Per Capita think tank: The Coalition’s margin certainty makes it the favourite, but Labor looks in much better form. The first-term leadership change has destroyed the government’s cohesion. They can’t stand each other — that’s plain. So, five goals down with only 15 minutes left, but with the wind behind it, Labor has nothing to lose. I say Bill Shorten’s team should go for it, stick strongly to its message about equality and talk about the big picture of what sort of country we want. Then they need to calmly explain how a good government can give it to us by investing in public schools and public hospitals, making housing more affordable and protecting the quality of working life.

Jane Caro, author, social commentator and communications consultant: I think Malcolm Turnbull is just ahead. Not because of anything he’s done (in fact, I think he’s had a poor start to campaigning, making some unforced errors by not having key facts at his fingertips and trying — but failing — to bluff his way out of it) but more because of what he’s not done. No one loves his budget, but nobody hates it either. People are still hoping he’ll stop looking like a rabbit in the headlights and do better. He must start to do better pretty soon, however, or they will lose patience. Bill Shorten is closing the gap fast. His budget reply speech was very well received and he is taking the initiative on policy. At the moment, he is setting the agenda and Turnbull is playing catch-up. If that does not change, Turnbull will lose his personal advantage.

Malcolm Turnbull: It didn’t take long for this campaign’s first fluoro to appear, with the PM sporting a yellow, hi-vis vest at the Brisbane Markets this morning where he talked up the benefits of the free trade deal. At a doorstop press conference in Petrie, Turnbull predictably focused on “jobs and growth”. When asked about why he didn’t mention climate change in his campaign launch speech he turned the focus onto Shorten. “What Bill Shorten is proposing are a set of measures which will dramatically increase the cost on all Australians,” he said. “Unless everybody increases together, it will be quite ineffective.” Turnbull will visit three marginal electorates in Queensland today: Petrie, which is currently held by Luke Howarth of the Liberal-National Party by a margin of 0.5 %; Bonner, held by LNP member Ross Vasta; and Moreton, which is currently held by Labor’s Graham Perrett by 1.6%.

Barnaby Joyce: Barnaby Joyce arrived in Canberra yesterday morning saying “you never know when you might need a suit” and looking forward to “a cup of tea, scones”. With the election called he gave a press conference at Parliament House. “We have only one place that all of us will live — it is in the future,” he said, before promising the Coalition would campaign “not in a way that doesn’t let us have fun, not in a way that we turn into some peculiar creature that is completely scripted”. We can only look forward to more “fun” from this particular peculiar creature over the next 53 days.

Tony Abbott: Wheeeeere’s Tony? It didn’t take long for the erstwhile PM to turn up, with Abbott starting the day handing out fliers at Manly wharf …

Bill Shorten: Bill Shorten started his day in the marginal seat of Leichhardt, which is currently held by the Coalition’s Warren Entsch on a margin of 5.7%. He will spend the rest of the day campaigning in Cairns, where he is expected to talk about education. The Opposition Leader is staying on message on Twitter:

This election is a contest between Labor putting people first and a Liberal Party looking after vested interests and the top end of town.

Richard Di Natale: Richard Di Natale kicked off the Greens’ campaign in  Anthony Albanese’s seat of Grayndler this morning, where he joined Greens candidate Jim Casey to speak about the impacts of the budget. “It says a lot about Richard Di Natale that his priority today, on day one of the election campaign, is removing me from the federal Parliament,” Albanese said on ABC Radio. Speaking from an anti-coal protest in Newcastle yesterday, Di Natale suggested the Greens were the only party with the courage to transition Australia to a clean energy future. “We’ve got two old parties stuck in the past, holding us back,” he said.

Nick Xenophon: Nick Xenophon, who had been hitting out at Labor and the Coalition for their “premature erection” of campaign posters before yesterday, kicked off his campaign this morning by speaking to David and Will on Adelaide’s FIVEaa. Speaking yesterday in front of Adelaide Oval, he said: “We want to be a bridge between the left and right of politics in this country to get rid of the toxic politics that really has impeded progress.”

Media mentions over the weekend: not surprisingly, the PM came out in front …

The latest Newspoll, released today, shows Labor ahead of the Coalition in the two-party-preferred count; they’re at 51% to the Coalition’s 49%. Turnbull is still easily beating Shorten when it comes to preferred PM, besting him 49% to 27%. 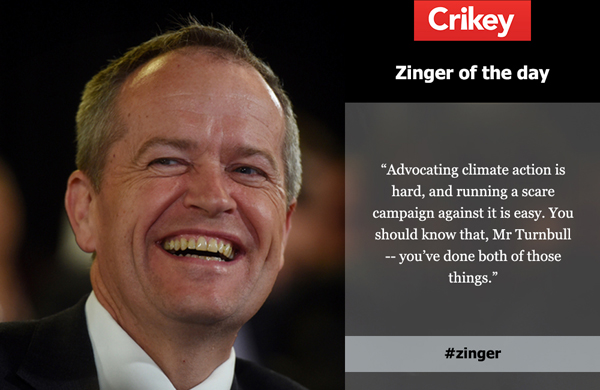 Barnaby Joyce may have had tongues wagging with his plan to eradicate carp with herpes, but our daily quirk award goes to the newly clean-shaven Chris Bowen. He told Sky News yesterday:

Earlier today, I visited the Governor General and asked him to dissolve Parliament for an election #auspol #ausvotes pic.twitter.com/OhP4EGj5iw

Turnbull and Shorten are hitting marginal Queensland seats on the first day of the marathon, 55-day election campaign. While Turnbull remains the favourite, Labor is looking strong.

Josh…it doesn’t matter how far ahead Talcum is in the PPM stakes if the majority are NOT going to vote for his party! In poll terms, that is where we are at (2PP)!
In election outcome predictions, this measure is worse than useless. Just encourages the cult of personality…when what voters should be focusing on is POLICIES and what is good for the country overall.