What's behind the Fairfax strike investigation? ... the Donald cheats at golf ... Christensen on Shorten ...

Clinton slams Trump the golf cheat. Donald Trump is the presumptive Republican nominee for president. No, really. And Hillary Clinton has wasted no time reminding voters of the sort of guy he is, with a brutal new attack ad compiling the greatest hits of his run … 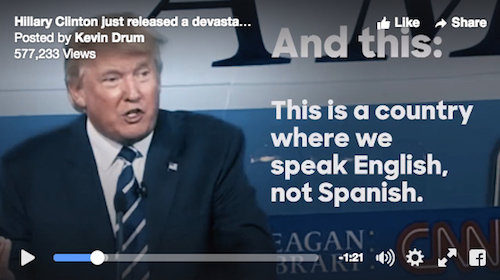 But Clinton left perhaps the most damning claim of all out of the ad: the Donald apparently cheats at golf. There are two sources now on the record: actor Samuel L. Jackson in January and, just this week, boxer Oscar De La Hoya, who told AP: “Yes, I caught him. It was unbelievable. But I guess it was his course, so it was his rules.” That’s just not cricket.

‘Independent’ FOI decision-making. Attorney-General George Brandis went to great length in the short Senate estimates hearing yesterday to explain how FOI is entirely independent from him.

In Crikey‘s FOI request to the Attorney-General, the decision-maker was his chief of staff, Paul O’Sullivan, as is standard for FOI requests to ministers. While we are sure O’Sullivan did his utmost to adhere to the act, can the chief of staff really ever be completely independent from his boss?

Who pressured Fair Work? The Fair Work Ombudsman’s decision to investigate Fairfax workers who took part in a snap strike action earlier this year has surprised many in the industry, with investigations into unlawful strikes being rare undertakings from the FWO. Fairfax made no application to suspend the strike at the time, so why is the FWO investigating off its own bat? We understand that the order could have come from higher up. Could the Employment Minister have had a hand in the decision? Do you know more? Get in touch. And you can stay anonymous.

Speed demon. A tipster tells us he saw former Age columnist Catherine Deveny riding through Royal Parade last night without a bike helmet, but it’s no gotcha moment. The writer is open about her anti-compulsory helmet stance, so we’re guessing her decision to bare her pigtails was civil disobedience.

Ricky Muir loses himself. With Malcolm Turnbull due to turn up to Yarralumla on Sunday, it’s been a week of farewells and maybe-farewells from MPs in Canberra. Accidental Senator Ricky Muir, who some pundits say voted himself into unemployment by blocking the ABCC bill, posted his goodbye to Facebook. In a long post, Muir said he was proud of his background and his record.

“I am proud that I tried to give a voice to ordinary, everyday Australians, who make up the majority of our population but are largely ignored by the decision makers in the political sphere.”

While Muir is running for re-election with the Motoring Enthusiast Party, he has packed up his parliamentary office.

“My Canberra office is now bare, my heart is heavy, but tomorrow is another day and I am willing and ready to stand again.”

“Let’s hope that after July 2 (providing that is the official election date), that these lyrics become quite fitting and Australia still has a diverse Senate, not a rubber stamp!”

Muir then went on to quote from Radiohead’s Karma Police, with a link to the video clip for the seminal song. 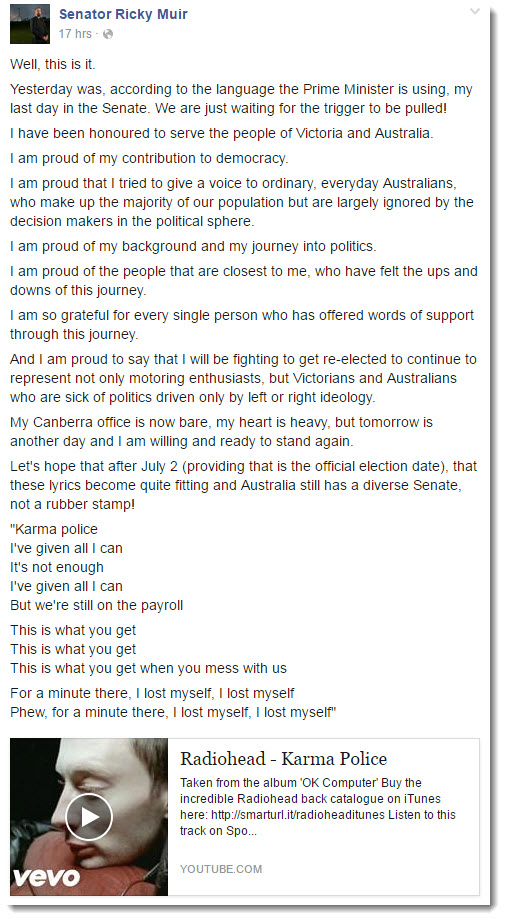 A message from Christopher. Industry Minister Christopher Pyne is making sure locals in his electorate can’t forget about those submarines. Following robocalls from Malcolm Turnbull last week, a tipster received this 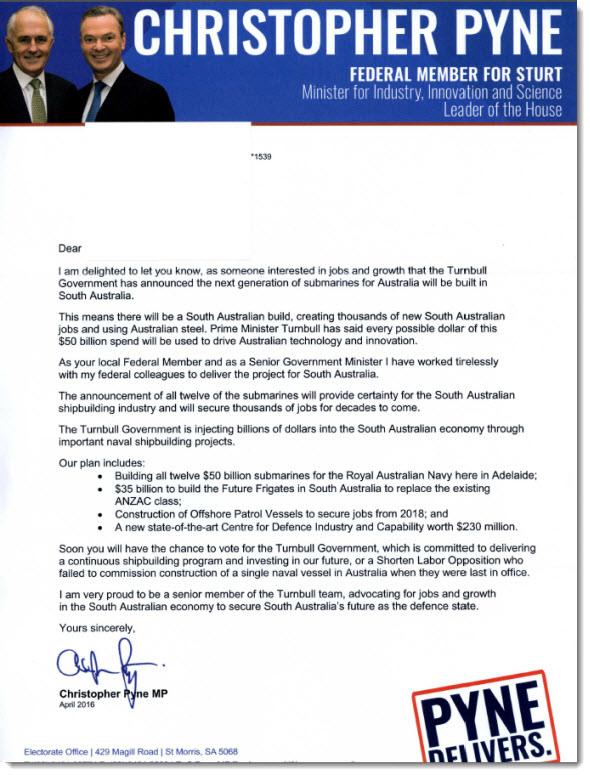 Christensen does Shorten. While we’re about to lose Clive Palmer and his video selfies from Parliament, it looks like fellow Queenslander George Christensen is going to take up the mantle of bizarre social media clips. Christensen released this 10-second analysis of Bill Shorten’s budget reply speech last night:

The script doesn’t really do it justice; with Christensen, it’s all in the delivery. 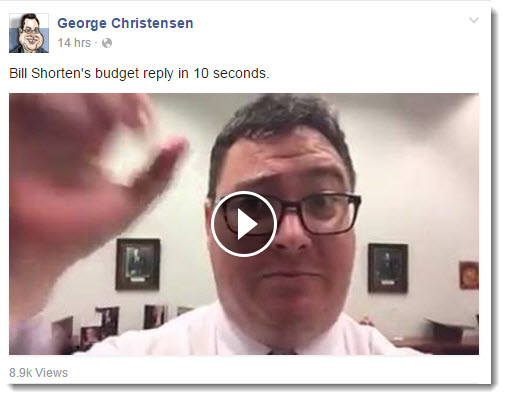 The No. 1 sign of nanny state overreach? Those damn bike helmets.

I’m shocked, shocked I say, that Christensen doesn’t know what communism is

I can’t help it. Every time I see George I think of Newman (from Seinfeld).

It is amazing how much information can be packed into a one minute and thirty eight second video.

Looking at the comments, it appears that just as many people think it is an ad promoting Donald Trump, as it is an ad attacking him.

Go! Ricky Muir!
Wish I lived in Victoria and could vote for you. Your transformation from a timber worker? to an effective Senator has been very impressive.
Good luck with your fight to be returned to the Senate…hope you make it!!