Parliament House of Cards. Every so often, media companies put on premiere movies in Parliament House to show off to politicians the value of their craft. Infamously, Village Roadshow put on a screening of The Lego Movie weeks before its wider release in Australia while at the same time it was lobbying the government to stop people pirating the film, which was released months earlier in the US. Last night Parliament hosted Foxtel, with various media and entertainment journalists flown from around the country to sit alongside our elected officials for a screening of Secret City. This is the political intrigue/drama TV series premiering on Foxtel earlier next month based on The Marmalade Files, written by the ABC’s Chris Uhlmann and News Corp’s Steve Lewis. By all accounts it sounds like a cracker series, with at least one MP comparing it to Netflix’s flagship series House of Cards. We wonder if this means the PM will retire his Frank Underwood quotes for something in Foxtel’s new series. 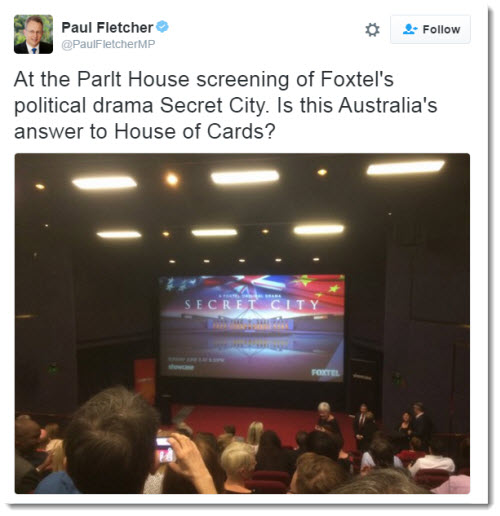 Lil Jaspers. Former prime minister Kevin Rudd must be planning to be based in New York for the long term — he’s just adopted two kittens in the Big Apple. In a photo posted to his Facebook page, Rudd says “Mei Mei and Qing Qing — sisters adopted from a rescue shelter here in NY. They are wild and loving and full of kitten antics.” 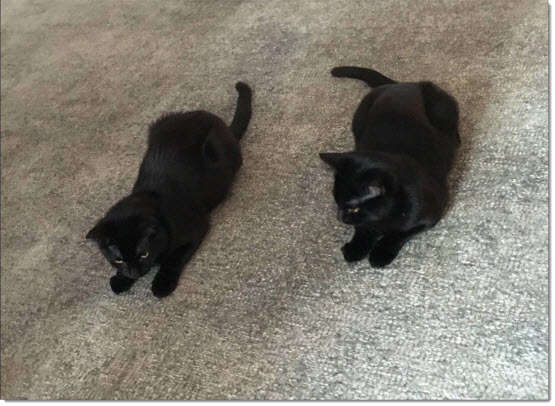 Just in case we (or the Chinese) forgot that Rudd speaks Mandarin, the names are Chinese, with “mei” meaning “beautiful”. We haven’t been able to confirm what “Qing” means, but are told that repetition of names is a common feature of nicknames or made-up names. Rudd has been based in New York for a few years now, where he is mounting his campaign for United Nations Secretary General, and while this has been confirmed by Foreign Affairs Minister Julie Bishop, Rudd is yet to publicly say that is exactly what he is doing.

The fur babies must be set to stay in NY for a while — we wouldn’t want them to face the fate Barnaby Joyce threatened for Pistol and Boo. Mei Mei and Qing Qing aren’t the first black felines to be a part of the Rudd household — Jasper the cat was featured in the children’s book Rudd wrote “Jasper and Abby and the Great Australia Day Kerfuffle” and passed away in 2012. “I think Jasper would approve,” Rudd wrote on Facebook today.

And in case you didn’t get enough of a look at them, here they are again: 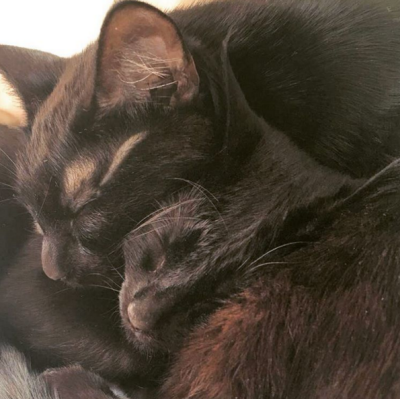 Hillary Bray leaves the building (again). Former Crikey writer-turned-News Corp columnist has been made redundant from The Australian. Kerr wrote for Crikey until he was lured away by Rupert in 2008 — or as former editor Jonathan Green put it, “Christian Kerr left in a chauffeur-driven huff”. At The Australian, Kerr occasionally filled in for James Jeffrey on Strewth (not occasionally enough for our liking; his Strewth columns were generally woeful) and wrote culture warrior pieces like the one “outing” Larissa Waters’ six-year-old daughter for wearing a pink dress at a birthday party. The story in print included a black bar over the little girl’s eyes. Crikey‘s own Guy Rundle didn’t think much of it. News Corp declined to comment on Kerr’s redundancy, and we have no word yet on where he might be going next.

Sniping and undermining. Soon to be former Liberal MP Dennis Jensen is leaving us with no doubt about what he thinks about the party that dumped him at preselection last month, after steamy passages of his unpublished novel were leaked to the press:

Estimates, speed round. While most of us have switched completely into election mode, there is the not insignificant matter of Senate estimates to be held before we can really give up on governing and head to caretaker mode. The hearings are being squashed into two days though, to be finished by tomorrow. That was optimistic at best; we’re not even halfway through day one and we’re already running late in at least one portfolio:

Clive’s (potentially) last parliament press conference. After yesterday announcing he wouldn’t recontest his seat of Fairfax, there was a small turnout for Palmer’s potentially last press conference as the member for Fairfax in the Senate courtyard this morning, despite staffers setting up a loud speaker for the event. Palmer announced who would be leading the Senate tickets for the Palmer United Party in New South Wales, Victoria, and South Australia (conveniently overlooking Queensland where he could run). It all quickly descended into a sledging match when Liberal MP for Herbert Ewen Jones crashed the party and asked Palmer where the money for Queensland Nickel workers is.

Palmer would not rule out money from Mineralogy being donated to the Palmer United Party this time around, and said he had not asked the Senate candidates to sign documents confirming they wouldn’t leave the party if elected. The candidates said they had no intention of leaving.

On the long-running mystery of who is Terry Smith, Palmer confirmed that he used the name as an alias, but used the pilbera@yahoo.com email address for all his business and parliamentary activities. He ended the press conference by saying “god bless you all, god bless media and all that”.

Full support. Opposition Leader Bill Shorten took a break from hammering the government about the budget to take part in Tom Gleeson’s Hard Chat segment on The Weekly with Charlie Pickering last night. While Gleeson has snagged some big names and had Rudd talking about “the dismemberment of  human bodies” last week, Shorten kept it together but mainly stuck to the script, even when Gleeson came at him with a zinger of his own: “You helped drag down Kevin Rudd and then helped drag down Julia Gillard. Are you sure you can have your own full support?” 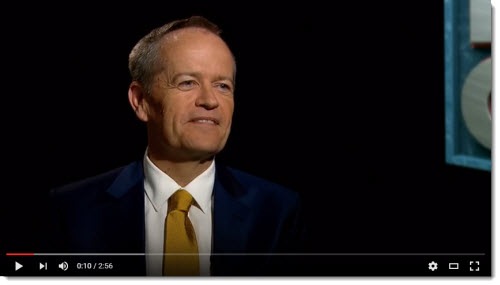 Should the legal drinking age be raised to reduce road crash deaths?

“Qing” (according to google) translates best as the colour of things in nature (e.g. blue sky, green frog). To double it as Qing Qing is simply to make it a nickname.

Gleeson’s question is pertinent – can gumBoil Shlernt truly be trusted not to knife himself?
Only the denizens of the SussexSt Lubyanka know and they haven’t told him.
Yet.