Anything he touches, Palmersaurus wrecks

Larger-than-life businessman Clive Palmer has announced that he won’t be recontesting the seat of Fairfax at the election, despite promising weeks ago that he wasn’t going anywhere. It’s probably a wise decision on his part, with locals less than thrilled with their local MP, both for his failed business dealings and for his lack of commitment to his parliamentary duties. Palmer doesn’t believe he’s done all that badly, attacking the media, the Liberals and pretty much everyone that’s not him in his valedictory speech yesterday morning.

While Palmer doesn’t seem to be ready to put the lid on his political career, saying “having concluded my service in the 44th Parliament of this House of Representatives, I will not seek further election to this House at the next election”, leaving the door open to run for the Senate, we think it’s time to look back at Palmer the politician, the hits and the misses.

Remember Al Gore? When Clive Palmer bothered to turn up to Parliament, he did it with a bang. Back in 2014 Palmer shocked Australia when he held a joint press conference with former US vice-president Al Gore, announcing that he would vote to save the Clean Energy Finance Corporation and the Climate Change Authority. He did still give Tony Abbott the votes to repeal the carbon tax, meaning that his environmental record is green and weird: 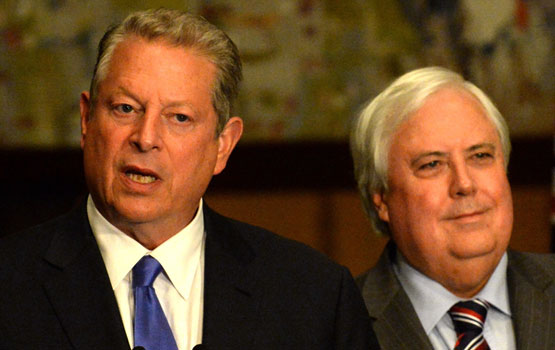 Our poor eyes. Politicians on commercial radio is often disturbing (Malcolm Turnbull telling us how he convinced a reverend to marry him and Lucy), but nothing has been more disturbing than the sight of Palmer twerking for Kyle and Jackie O. May we never ever see it again. Except this one last time:

Wendi the spy. Rupert Murdoch has long been a target of Palmer’s, but in 2013 he turned his attacks to Murdoch’s then-wife, Wendi Deng, saying on the Today Show:

“You know, Rupert Murdoch’s wife Wendi Deng is a Chinese spy, and that’s been right across the world.”

International relations. Palmer’s television statements didn’t improve when he sat on the Q&A panel and said he would fight against “Chinese mongrels”:

“”I’m saying that because they’re communist, because they shoot their own people, they haven’t got a justice system and they want to take over this country.”

Attendance optional. At least in those interviews Palmer stuck around to answer the questions, a courtesy he didn’t give to Sarah Ferguson on 7.30:

He also rarely showed up for parliamentary sitting, with the worst record in the House of Reps. And when he did show up, he couldn’t manage to stay awake.

Talking points. Definitely one for the “misses” column, Palmer told Tony Abbott to “commit suicide” over cuts to university funding. He later said he meant “political suicide”, which we guess makes it better?

Goodbye, goodbye, goodbye. And lastly, to the goodbyes, which Palmer doled out to former PM Tony Abbott, former Queensland premier Campbell Newman and former speaker Bronwyn Bishop. Perhaps Bronwyn Bishop is enjoying a moment of schadenfreude as she watches the decline of Clive Palmer. He definitely enjoyed himself while making this clip to farewell the former speaker after the choppergate scandal: