From the Crikey grapevine, the latest tips and rumours … Not dead yet. The Australian declared this morning that the government had decided to axe the $250 million controversial National School Chaplaincy program as revealed in the budget papers. A look through the papers shows only a passing mention of the program, and nothing about axing […]

Not dead yet. The Australian declared this morning that the government had decided to axe the $250 million controversial National School Chaplaincy program as revealed in the budget papers. A look through the papers shows only a passing mention of the program, and nothing about axing it. It seems The Australian was jumping the gun just a little bit. The program is funded until 2017, and Crikey understands that the government has yet to enter the review stage of the program to decide whether to renew funding in next year’s federal budget. Oops.

No pictures! Parliamentary photographers have long railed against rules that prevent them from photographing the Senate, with no real explanation for why the rules are in place. This morning the Senate’s own Twitter account tweeted a photo of Finance Minister Mathias Cormann tabling the budget papers in the upper house, before being berated by The Guardian‘s Mike Bowers and admitting that they had broken their own rules. Smooth. 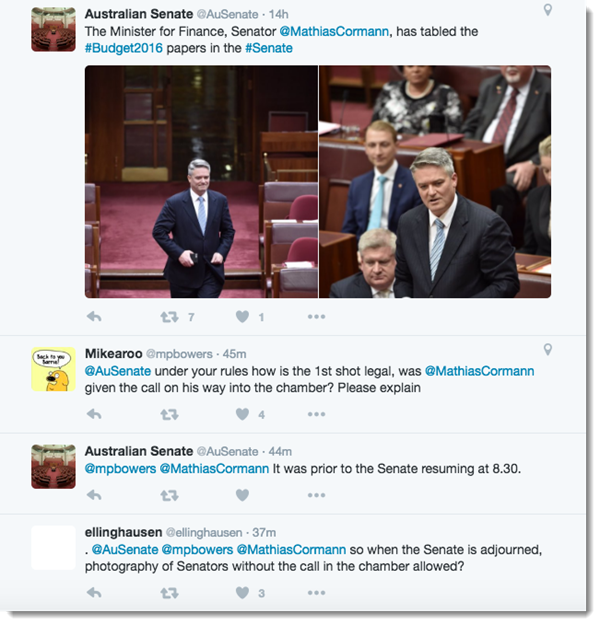 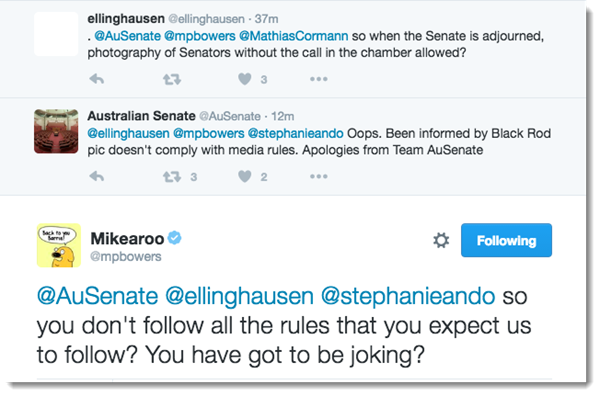 Fighting fire with fire. A battle is brewing in Victoria between different arms of the firefighting services, with the Country Fire Authority demanding that the state government resist the United Firefighters Union’s bid to gain control of CFA decisions. State Emergency Services Minister Jane Garrett is with the CFA, pitting her against Premier Daniel Andrews. Now a website called handsofftheCFA is gaining traction with a petition aimed at Andrews. A tipster pointed out to Crikey that the site is not run by the CFA, but is authorised by the Victorian Liberals.

Philip Ruddock pulls up stumps. While most of the press gallery was locked away yesterday studying up on the budget papers, the Father of the House Philip Ruddock gave his valedictory speech after more than four decades in Parliament. Ruddock looked back on his time in Parliament fondly, with a lengthy speech that named many of the people he had worked with politically, and the public servants who had served him. He made time for a special shout out for Andrew Metcalfe, one of the departmental secretaries dumped by Tony Abbott when the Liberals came into government in 2013:

“He was a very honourable and thoroughly professional Australian public servant, who served the government of the day, and I regret very much the way in which his service to this nation came to an end. Can I just say that I was well served, because he was with me at a time when I had very particular additional responsibilities early in the Howard government.”

The soon-to-be special envoy to the United Nations for Human Rights acknowledged that he had difficult policy decisions in his time, but also took the time to acknowledge the work of the media and how it had changed:

“I want to take the opportunity to say something about the media. We all have a lot to say about the media. I think the media have changed the way in which they report on this parliament. There was a time in which a speech like this may even have been reported. I am not sure it will be. There was a time when question time was reported. All of it has changed because the print media are always too late; everything is broadcast on another medium beforehand. So we do not get the reporting; we have much more commentary.”

Ruddock also named his favourite journos and broadcasters, with names from many corners of the media:

“That leads me to want to comment on a couple of journalists, if I may. I find that Michelle Grattan is the most difficult lady to work with because she has your number and she will ring you any hour of the day or night to check the accuracy of any comments you may have made! I must say to any media members who are listening: if you need to emulate anybody in terms of thoroughness of preparation, model yourself on Michelle Grattan. Paul Kelly is extraordinary. I have enjoyed working with people like Malcolm Farr. I hope you will excuse me if I single out a couple of people in the ABC. Mark Colvin received a kidney from a very dear friend of mine and is still broadcasting today. I might say, Emma Alberici befriended my friend when she was in London before she came back here. I have a very warm affection for each of them as well as Leigh Sales and Chris Uhlmann. Even though Chris is related to the other side by marriage, I think he is an extraordinarily professional broadcaster and I single him out. That enables me to thank some others you might not want me to say thanks to. I want to thank Alan Jones, Ray Hadley, John Mangos and John Gatfield because each of them have been willing to use their broadcasting skills to help on important anniversaries of mine. I acknowledge that and thank them for their friendship and their willingness to help in that way.”

Who’s campaigning? A Crikey tipster received this from his local MP, Michael Sukkar last night. It’s more “campaigning without campaigning”. At least we only have a few days of faux-campaigning left before we can all stop pretending.

Heard anything that might interest Crikey? Send your tips to [email protected] or use our guaranteed anonymous form

So the cadaver finally walks no more. What pestilence he has brought upon us.

Almost the last stench of the noisesome government that did so much damage during their decade violating the national ethos is being cleared from the air – if only we could rely of the voters of Warringah to finish the job.