Finally, some real transparency from The Daily Telegraph … at least on the front page. A clever see-through cover for Sydney’s best-read daily had Treasurer Scott Morrison all dressed up, only to reveal himself as Superman by turning the page.

But commentators found plenty of kryptonite in last night’s federal budget, too … 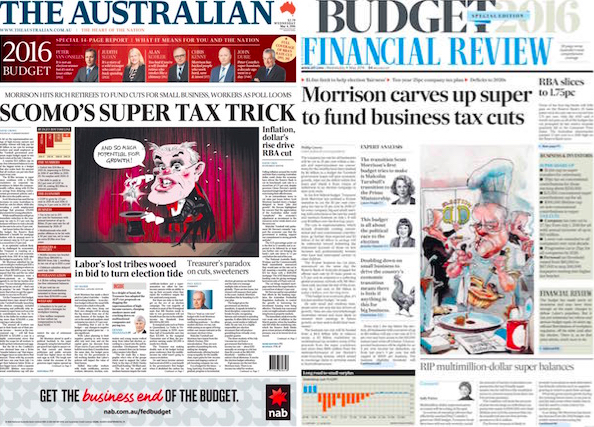 “After thought bubbles and missteps such as the GST idea, the Prime Minister promised ‘substantial’ taxation reform in the budget and his Treasurer has delivered more than many expected.”

“It is a budget for the times — a long, hard slog. Everything is gradual, progress is incremental, election giveaways are limited and the task is to manage multiple risks at home and globally. There are few losers, but winners will measure their gains in the years. Indeed, Morrison formalises this by branding it a 10-year plan.”

“Scott Morrison has stayed away from the cold-turkey ­approach — he saw Joe Hockey try that in 2014 — but importantly he hasn’t returned to the ­dispensary, which is where Hockey ended up last year. Morrison and Malcolm Turnbull have done enough to provide some semblance of a path to recovery.”

“Mr Morrison’s first budget asks the right questions about the need to construct a compelling economic growth agenda that requires the government to start living within the nation’s means. But it puts off too much of the answer.”

“Morrison is trying to change a mindset. Giving everyone sweeteners while trying to combat debt and deficit with tax hikes and spending cuts is like trying to put out a bushfire with a garden hose.”

“Treasurer Scott Morrison’s decision to double down on the strategy of relying on small business to drive the country’s economic transition means there is little if anything for big business in his first federal budget.” 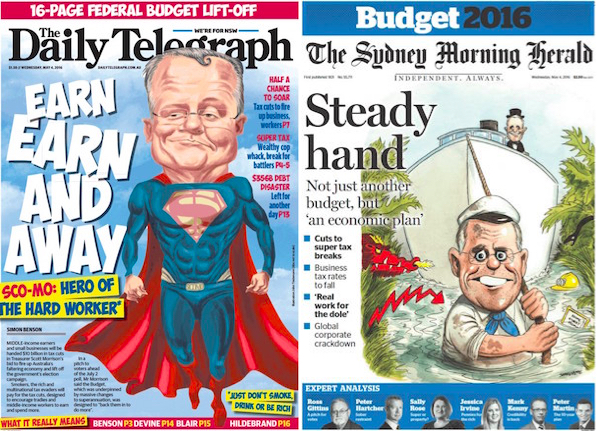 “To the Budget’s credit, it is at least a document that ministers, local MPs and the party room in general should be able to sell.”

“The ‘Soak the Rich’ class warfare which seemed quaintly retrograde during Wayne ‘postcode’ Swan’s time now is the new normal.”

“He has provided the Prime Minister with a credible election-eve document that finally outlines an economic plan the government can sell to the electorate.”

“Mr Morrison has passed — not with flying colours, but with a steady enough hand to minimise the chance of a voter revolt or economic slump.  Whether he and Mr Turnbull can sell their measures well enough to erase voters’ memories of the Hockey-Abbott failings is another question.”

“This budget is quintessentially political, but not in the normal pre-election way. Rather than splashing cash around buying votes and salving key demographics, the Turnbull-Morrison formula is about restoring credibility. Credibility in terms of the Coalition’s motives, and credibility in terms of the Coalition’s traditional strength of economic management.” 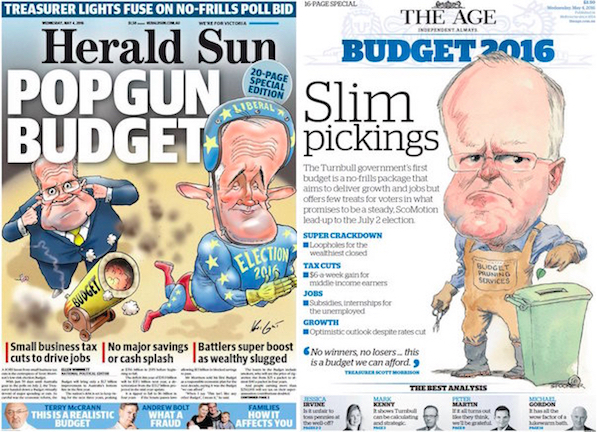 “This is not a Budget that guarantees Malcolm Turnbull and the Coalition victory at the forthcoming election. In key respects it is disappointing, even timid, and an anticlimax to the exciting and agile leadership the new Prime Minister promised so confidently after dismissing Tony Abbott for the top job.”

“It’s the ‘Gunna Budget’ — a promise by a scared and clueless Turnbull Government that it’s gunna do the right thing one day. But not yet.”

“I’d call Scott Morrison’s the first ‘reality’ Budget we’ve seen in years. It aims to deal with two sets of realities; broadly, it succeeds in balancing them.”

“In our view, the Turnbull government’s first budget raises more questions than it answers. Will it foster real economic growth? Will it create jobs in an economy that is struggling to gain momentum? And, most importantly for Prime Minister Malcolm Turnbull, are the meagre offerings in this budget enough to convince voters that the Coalition deserves a second term?”

“Rather than attempt to bribe their way back into office, Turnbull and Morrison have staked all on their ability to convince voters that they have a “fully funded, affordable and sustainable” plan to deliver jobs and growth and return to a balanced budget in five years.” 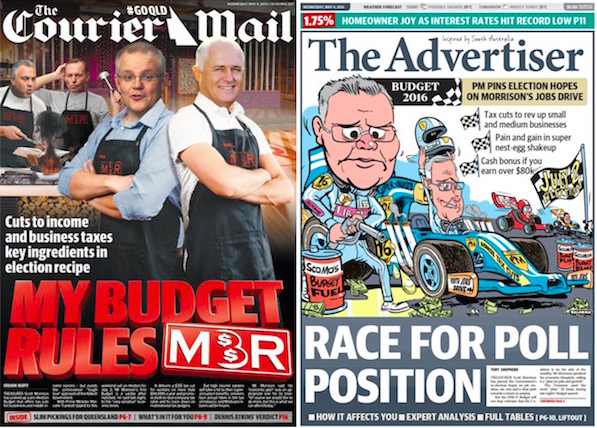 “… when Malcolm Turnbull from Point Piper starts waving the flag for the cloth capped wage slave it gets a little weird.”

“It’s not a brilliant election Budget; it has a decent story the Government can tell. But that story has sizeable holes in it, holes critics and Labor will try to tear wide open.”

“The Treasurer’s first Budget — but his Government’s third — is predicated on a lot of things going Australia’s way.” 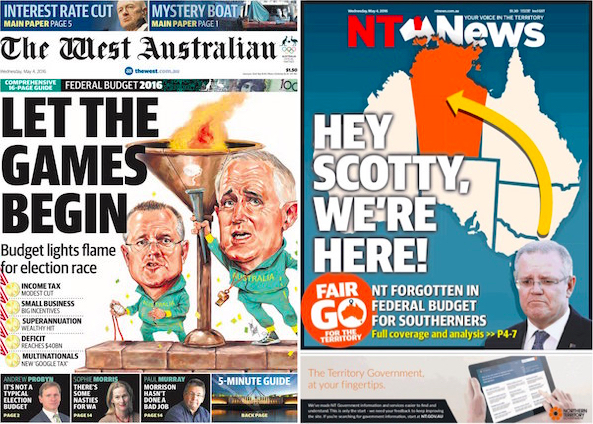 “… it is a clever Budget skilfully prepared, and it will help the Government in the looming election contest where it will hold it high as an emblem of its claim to economic management superiority over Labor.”

“There were certainly elements of this budget that made it not like other budgets. In particular, it’s not like the 2014 budget, which gave budgets a bad name and whose many errors this budget has studiously avoided.”

“So in the end Morrison’s budget is unusual for trying to tick every box, for trying to do so many different things at the same time that it risks not making much of an impact.”

But the final word goes to the NT News, for always keeping things in perspective … 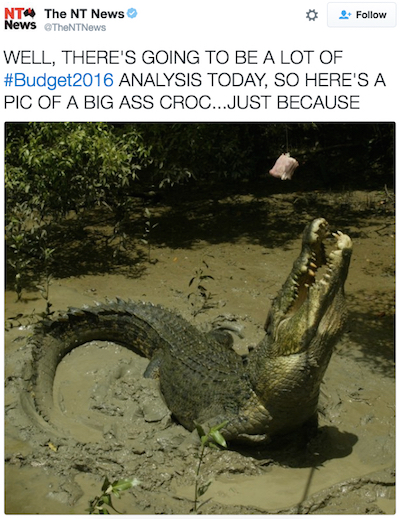 Well Malcolm Farr has certainly drunk deeply of the Kool-Aid. “nd it will help the Government in the looming election contest where it will hold it high as an emblem of its claim to economic management superiority over Labor.”” Really Malcolm.

Pity the poor journos. who have to plough through the thing, never mind try to write anything half sane about an inane piece of arse covering, jiggery pokery.