ABC cuts to come from budget? Following news in yesterday’s budget that the ABC would lose more than $5 million a year from its news budget, new managing director Michelle Guthrie has told staff to brace for “changes to staffing and programming”.

In the 2013-13 budget the Rudd-Gillard government committed to $20 million a year for three years for “enhanced newsgathering”. It went towards employing the ABC’s national reporting team, ABC Fact Check and more journalists for regional Australia. But the Turnbull government has cut more than $5 million a year out of that funding, promising $13.7 million this year, $13.8 million in 2017-18 and $14.1 million in 2018-19.

In an internal memo to staff, seen by Crikey, Guthrie hinted at what that blow might mean for the public broadcaster:

“I have been working closely with the Chief Operating Officer, David Pendleton and the Director of ABC News, Gaven Morris, on the budget implications. ABC News will seek to maintain as many of the Enhanced Newsgathering initiatives as possible, with storytelling from regional and outer-suburban areas a priority. However, there will necessarily be some changes to staffing and programming in line with the reduced allocation of funds.”

Morris also sent an email to staff, and he was more explicit that there would likely be some jobs lost as a result of the funding reduction:

“Our budget situation has now changed, and as a result we will need to find savings. Inevitably, this will impact on production and jobs. Now we know exactly what we’re dealing with, we will develop a proposal on which to consult with staff and unions as soon as possible.

“We always knew the additional funding was a three-year proposition but the prospect of losing good people and quality services is still extremely difficult. We are determined to minimise the impact on our staff whilst also ensuring we are able to re-invest in our digital future and continue our commitment to regional and local newsgathering.”

NY Times can’t make a buck. The New York Times has recorded yet another slump in both print and digital advertising revenues for the March quarter, despite another solid three months of building its digital subscriber base. The paper posted a loss of US$8.3 million in the quarter, down from the US$14.3 million deficit in the same period a year ago.

Overall revenues eased 1.2% to US$380 million in the quarter in what the paper’s management described as a “challenging” market for both print and digital advertising as it seeks to transition to an online model while expanding its readership globally. The paper recorded a similar fall in revenues this quarter. CEO Mark Thompson said in a statement:

“We remain bullish about our strategy, however, and believe that our timely pivot from traditional advertising toward branded content and marketing services, seamlessly integrated ad formats for both mobile and desktop, will deliver growth in the second half of 2016.”

Cruz: Rupert cost me the election. Ted Cruz has bowed out of the Republican contest to be president after losing today’s Indiana primary race. And it’s all Rupert Murdoch’s fault, apparently. Before conceding Indiana and “suspending” his campaign, the Texan earlier today complained about the role Murdoch and his Fox News henchman Roger Ailes is having on the race. According to Cruz, Fox has decided to back Donald Trump:

“There is a broader dynamic at work, which is network executives have made a decision to get behind Donald Trump. Rupert Murdoch and Roger Ailes at Fox News have turned Fox News into the Donald Trump network.

“Rupert Murdoch is used to picking world leaders in Australia and the United Kingdom running tabloids, and we’re seeing it here at home with the consequences for this nation.

“Media executives are trying to convince Hoosiers, trying to convince Americans, the race is decided. You have no choice. You are stuck between Donald Trump or Hillary Clinton, either one of which is a horrific choice for this country.”

As Cruz would later have to acknowledge, Trump is now firmly the presumptive nominee. And blaming Fox alone seems far-fetched: Trump has enjoyed blanket coverage across all channels thanks to his ratings-pulling power. Meanwhile, Murdoch has tweeted nasty barbs at Trump, and Fox’s more moderate talking heads like Megyn Kelly have given him as tough a time as any. Murdoch’s ability to be kingmaker in America is much harder than in Australia. — Jason Whittaker

Video of the day. And so Ted Cruz ended his campaign in the best possible way: by smacking his wife in the head in an awkward group hug … 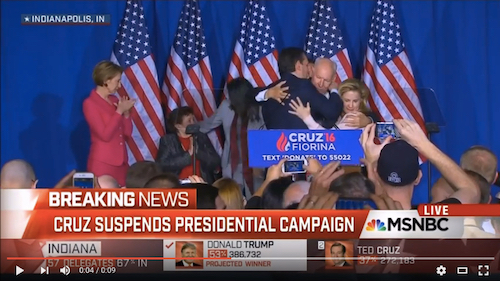 The biggest problem with any systematic approach to reducing taxpayer funded gifts to the “Arts” is deciding where are the more deserving recipients with whom to commence such cuts.