Isentia Index: So that was it?

Plenty of mocking, but not a lot of policy in the past week's political discussions.

Sections of the media were saying before this budget that it needed to be a “spectacular” document, to change the narrative and set the government up for a winning election campaign after months of sliding in the polls. Treasurer Scott Morrison went for nothing spectacular, the government hoping that no fistful of dollars, but no big cuts either (unless you’ve got a few million in your super account) would keep everyone feeling relaxed and comfortable enough to re-elect them.

Usually the treasurer wins the volume battle in Budget week, but it was lineball at the top this time, and with lower volumes than in the past. Immigration Minister Peter Dutton moved up into the top five as the fallout from the PNG Supreme Court decision on Manus Island continued and another Nauru asylum seeker burned themselves, following the death of a 23-year-old man last week.

Family First Senator Bob Day jumped up the list as he headed to the High Court to try and reverse the changes to the Senate voting system, which you would think might be tricky since the same system already operates in some states.

Cabinet Secretary Arthur Sinodinos was the other big mover, again not related to the budget, as he railed against the senate inquiry into claims of illegal election funding in NSW and refused to appear before it, raising the spectre of sanctions. 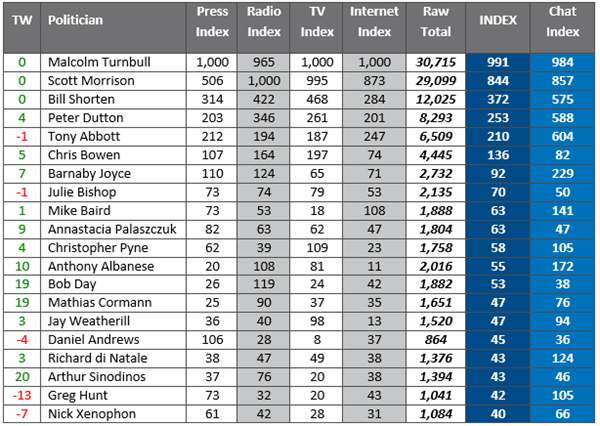 So was it Turnbull or Morrison who topped social chatter in Budget week? No, it was Peter “Bohemian Rhapsody” Dutton and his scary photo (plus some asylum seeker discussion, to be fair).

While on talkback the Ghost of Christmas Past is still fondly remembered.

What do you mean he’s a politician, not a celebrity? You’re joking, right?