Essential: Turnbull deflates further while voters back Labor on climate

Labor retains its election-winning lead in this week’s Essential Report, while voters are rapidly falling out of love with Malcolm Turnbull and looking at Bill Shorten with renewed interest.

Labor retains a two-party preferred lead of 52%-48%, with its primary vote down a point to 38%, the Coalition steady on 40% and the Greens also steady on 10%. That’s a swing of 5.5 percentage points to Labor from the 2013 election and in the unlikely event of occurring on a uniform national basis, would deliver Labor 23 seats.

Voters continue to sour on the Prime Minister, however. We saw in March how voters’ assessment of Turnbull’s attributes had deteriorated since his ascension to the prime ministership, and that process has continued in the intervening weeks. Turnbull has gone backwards since March on all positive characteristics, by an average of just under three percentage points, and has gone up on negative characteristics by an average of of five. Shorten, conversely, is continuing his steady rehabilitation with voters: his positive attributes are up by an average of three points, and his negatives are down a little (just below two). 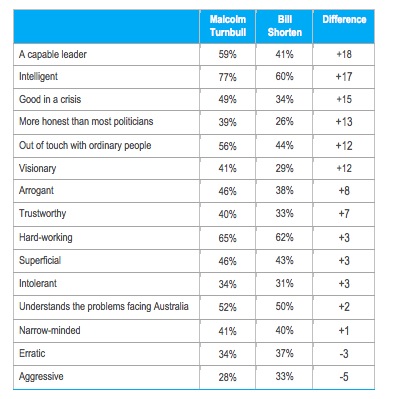 The result is that, despite our perceptions that Turnbull is more engaging, popular and prime ministerial, Shorten is getting close to him in a number of areas and leads him in a couple. Turnbull still strongly leads Shorten on “intelligent” and “a capable leader” (although he used to lead by a lot more, 34 points, in September) and “good in a crisis” (same), but on “understands the problems facing Australia” his once-strong lead over Shorten is now down to 2 points. Whereas once voters ranked him equal with Shorten on “out of touch” he now leads by twelve points; his lead on “visionary” has halved to twelve points, he has overtaken Shorten on “superficial” and has edged further ahead on “arrogant.

There’s some mixed news for Turnbull in other areas. The announcement of a deal to start negotiating the construction of French submarines in Adelaide in decades to come earns strong support, 52% to 27%, with more support than opposition across all voting groups. But it’s not clear that voters are shifting in the issue of negative gearing, which will feature heavily in the government’s election campaign. Voters approve of negative gearing, 43% to 36% — only a tiny shift from March, when support was 41%-37%, and still heavily skewed by voting intention — Coalition voters are strongly supportive of it while other voting groups are generally but not strongly unsupportive. And support for changes to negative gearing proposed by Labor remains more or less unchanged — 38% of voters oppose them and 36% support them, a slightly narrower margin than in March, when voters split 39%-35%. And just 24% of voters think house prices would fall as a result of Labor’s changes — the central government accusation against Labor’s policy — while 31% say “house prices would continue to rise but at a slower rate” and another 13% say they would have no effect on prices; 31% say they don’t know. Only 34% of Coalition voters accept the government’s argument that house prices would fall.

But the prospects for a successful scare campaign on Labor’s plans to reintroduce not one but two carbon pricing schemes don’t look good: 57% of voters approve both of Labor’s higher emissions abatement target and its proposal for an emissions trading scheme, and just 21% disapprove, suggesting that not merely is the issue not the weakness for Labor that the Coalition thinks, but might even be a winner for the opposition. 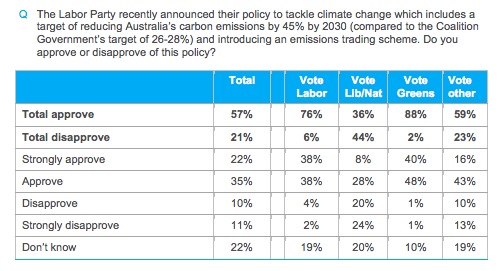 “Total approve” includes 36% of Coalition voters, and even a majority of normally climate-hostile “Other” voters.