Drone warfare in TV news. The race to be No. 1 in the world of commercial news has reached new heights, according to a tipster. We hear Channel Seven is in the process of trialling drones to be used to gather footage as part of its news reporting — but there has been some turbulence. In the past three weeks, one of the company’s drones was damaged in a testing exercise. Crikey understands that a drone used in Albert Park in Melbourne crashed after a software malfunction, but that there were no people around. (ABC News, we should note, has been using drones here and overseas for some spectacular framing shots.)

Vote early, vote often on AEC site. A Crikey reader tells us the Australian Electoral Commission’s website has been updated, and its “practice voting” tool now reflects the changes to Senate voting rules. People who are incredibly nerdy can have a go at numbering six preferences above the line for parties named after different weather events: there’s the “Mist Party”, the “Humid Party” and the “Breeze Party” — but no “Hot Air Party” … 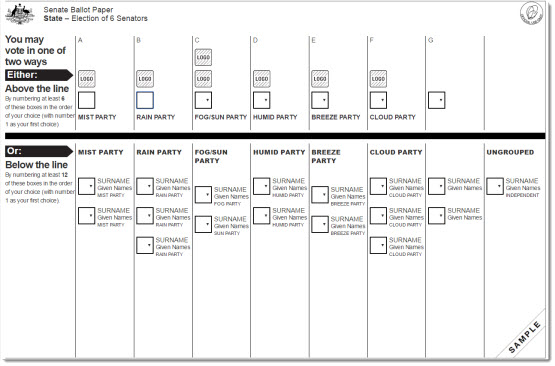 Political football in the chamber. Politics has often been described as Hollywood for ugly people, a claim Ms Tips obviously detests. But a report by the Joint Committee into Procedure could ensure politics becomes more like sport for ugly people. The report into electronic voting in the House of Representatives recommended voting should remain in the chamber and that members should continue to divide to the left and right sides of the chamber, but it also recommends members get a bit technical:

“The Committee recommends that the option of using a swipe or touch card (or electronic token) and readers that allow Members to vote from any seat to the left or right of the Chair be investigated.”

Our favourite part, however, is the idea that the results of the divisions be displayed in the chamber in real time. We imagine that it would be like a scoreboard, and the numbers would tick up as MPs cast their votes. The minutes of the division could count down as well, to add some tension.

Of course, adding tension and excitement wasn’t the reason the committee gave for recommending electronic voting. Apparently it’s for saving time and transparency:

“The potential for saving the time of the House was identified as the most compelling argument for modernising the House voting system. It was also argued that the immediacy of voting results provided by electronic voting would allow for greater transparency, particularly if the results were displayed inside the Chamber and were made immediately available to outside observers.”

Correspondence from Albo. One of Ms Tips’ favourite election traditions has already begun, with a tipster sending us the multi-page pamphlet from MP Anthony Albanese this week. With quotes from the late Tom Uren and a photo with Bob Hawke, it’s a good start … 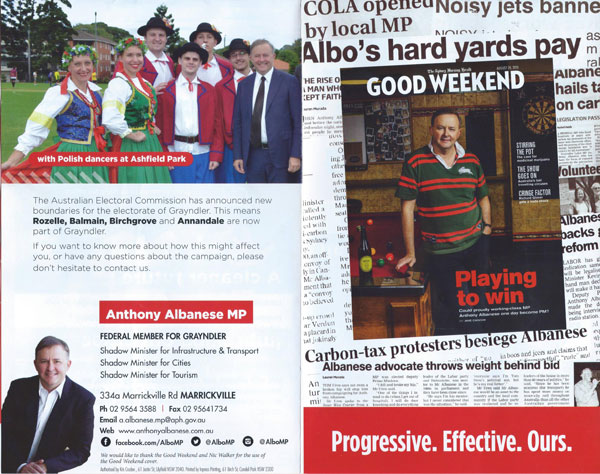 As always, if you receive a pamphlet from your local MP or candidate, we’d love to see it. You can forward your correspondence here.

No grants for gaming. As Crikey reported yesterday, the video game industry has been fairly poorly treated by the government. It once was able to get grants from the Australia Council for video game development, but Attorney-General George Brandis raided the Australia Council’s millions of dollars in cash and gave it to a new ministerial-approval-required Catalyst fund. No luck for the industry with this new fund because the guidelines for Catalyst funding specifically state that video games cannot be funded. However, we noticed one strange recipient for $125,000 in funding for a museum about cars in video games. So as long as it’s not funding video games directly, it’s OK, right …? 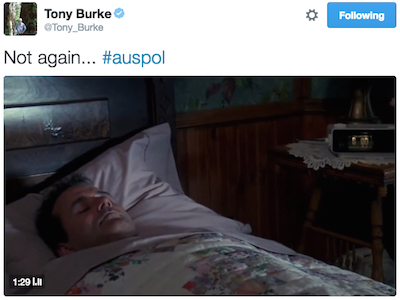 The Albanese pamphlet is a fascinating reminder that a nervous politician is a good politician. For years, as one of Albo’s constituents I was never disturbed by evidence of his existence. It was such a contrast with his good wife who bombarded the electorate with waste paper as the voters steadily turned towards the Greens. Now that Grayndler is marginal it look as though Saturday morning shopping may become a hazardous exercise, ducking and weaving from various political spruikers.