Is it too late for The Age to say "sorry"? ... whistleblower tools for Fairfax hacks ... uncovering good/bad DV coverage ...

Is it too late for The Age to say ‘sorry’? The Age has today published an apology to Noble Park grocer Antonio “Tony” Madafferi , describing him as a “hard working family man who has never been charged by the police with any criminal offence, and has no criminal convictions”. In 2015, Madafferi sued the newspaper for defamation following the publication of a series of articles, beginning in 2014, by dynamic investigative duo Richard Baker and Nick McKenzie, as well as by investigative journalist Royce Millar and state political editor Josh Gordon. The articles claimed Madafferi was the head of the Calabrian mafia in Melbourne and linked him to instances of drug trafficking, extortion, bribery and murder.

The case took an interesting turn in December last year, when Madafferi’s lawyers tried to obtain a court order to compel McKenzie to reveal his sources for the articles. The attempt was rebuffed by Victorian Supreme Court  judge John Dixon, who upheld the right of journalists to protect their sources in defending defamation cases. — Dan Wood

“… metadata laws passed late last year mean that phone companies and internet service providers must keep details of communications between people for two years, and this information can be obtained, sometimes without a warrant, by a range of law enforcement agencies.

“Journalists have a measure of protection — agencies must obtain a warrant — but applications for warrants are conducted without the reporter’s knowledge and in our defence sit two retired judges, both appointed by the government, who have no background in media law.”

SecureDrop is a project of United States-based not-for-profit Freedom of the Press Foundation, allowing messages and files to be passed anonymously and securely to the paper’s reporters. JournoTips by Whispli was a system designed for corporate whistleblowers but is now being used by journos to receive tip-offs. Fairfax will promote links to the platforms on its investigations.

Uncovering good/bad DV coverage. A new project from the Centre for Advancing Journalism at the University of Melbourne will be a Media Watch for coverage of domestic violence and violence against women, highlighting good and bad reporting and providing resources to journalists covering the sensitive issue. Uncovered, editor Loni Cooper writes, will be:

“… looking at who’s reporting what on this issue — at what’s good, and what’s not so good. We’ll explore the ethical dilemmas and impediments we face when covering these stories. We’ll try to provide useful resources, contacts and guidelines for covering this issue. We’ll field and direct questions from our colleagues and members of the public, and try and answer some of them. And we’ll work hard to fill some of the gaps that remain — to report on the issues we’re still not hearing about.”

The web resource, overseen by the centre’s director Dr Margaret Simons as editor-in-chief, is part of a wider resource project on the media and violence against women, analysing Australian coverage over a three-year period, interviewing journos on gender equality in newsrooms and investigating the impact of media content on community attitudes towards violence against women. Cooper says Uncovered will “constructively critique” mainstream media to give journalists “a better understanding of what’s right, what’s wrong and what’s missing in coverage”. — Jason Whittaker

Video of the day. She’s the vice presidential pick for a Republican candidate with no hope of winning. And now former Hewlett-Packard boss Carly Fiorina has comically fallen off a stage at a Ted Cruz rally … 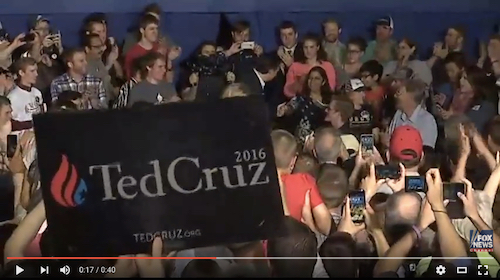 Front page of the day. If the photo wasn’t weird enough, The Courier-Mail does Scott Morrison no favours with the creepy “hello ladies” tag … 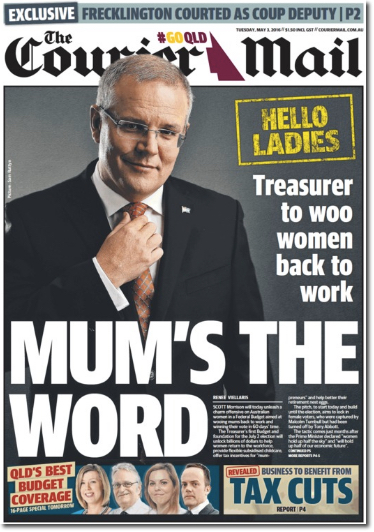