Turbulence with frenemies: budget lockup through a journo’s eyes

As always, the quality of budget catering supplied by each media outlet was a point of conversation.

Treasurer Scott Morrison assures the press, and the public, that this is a budget unlike any that have come before it; it’s not a budget, it’s a “national economic plan” (unlike those other budgets, which are …?), but just like the budget papers, the actual experience of the lockup seems like more of the same.

Crikey bonded over the shared trauma of a turbulent ride with our frenemies at The Australian, The Conversation and the Institute of Public Affairs during a bumpy flight from Melbourne to Canberra this morning, while buses of News and Fairfax journos commuted from Sydney.

While getting into Parliament House was a simple experience, the queue of reporters and commentators lining up to enter the sacred space of lockup seemed like it would never end. We had already surrendered our phones — it turns out forming an orderly queue without the ability to scroll through Twitter is beyond the patience of many in the media, your correspondent included. We had to amuse ourselves with people-watching — former Crikey wunderkind Matthew Knott! The inimitable James Jeffrey! Peter Helliar in his Australia jumper! — and actually talking to our colleagues. Thank god the budget is only once a year.

While reporters focused on understanding the finer detail and delving into items not dropped before today, there are always other factors to keep journos amused — who is talking to whom, what food is on offer and how the new Treasurer is performing in his first (and possibly only?) budget.

On areas where the government was less comfortable, detail was scarce. When Crikey’s Josh Taylor queried Treasury officials on the lack of any funding committed for a plebiscite on marriage equality, he was left waiting for someone to answer his question for more than 30 minutes, only to be eventually pointed towards a press release. Australia continues to wait for marriage equality — and we continue to wait for answers as to why.

As always, the quality of budget catering supplied by each media outlet was a point of conversation. The scribes at Fairfax had a quality spread (maybe the company softening the blow of upcoming redundancies?), while others enjoyed pizza, with the smell wafting to those less fortunate.

The powers that be did not supply Crikey with the budgetary necessities to secure catering, so your correspondent survived on jelly beans and Diet Coke, emulating Bernard Keane’s legendary powers to write a plethora of complete budget coverage powered by nothing but his own towering intellect and a packet of snakes (and he tells us he’s off the snakes this year and had only a few decaf teabags to keep him going). Our colleagues at The Mandarin took pity on their Melbourne cousins and shared their Costco sandwiches, while Sky News’ food got a terrible review — we heard the words “inedible” and “disgusting”. News Corp’s catering was said to be “an embarrassment”. AAP’s Lisa Martin reached new heights in the creation of her annual budget day cake, topping last year’s barnacle-laden ship with a Cheshire Cat — inspired by Prime Minister Malcolm Turnbull’s toothy grin. 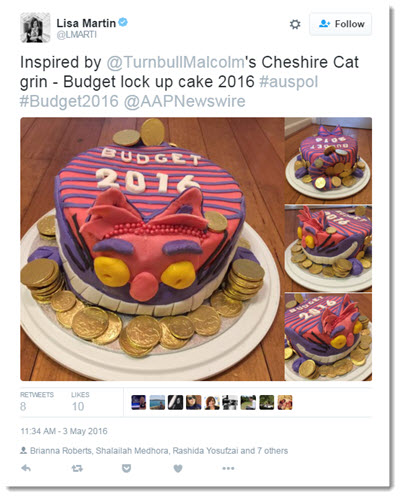 There’s an element of nerdy celebrity-spotting to the budget lockup, but Treasury officials are perhaps the nerdiest of the bunch; they were spotted getting excited at the sight of Channel Seven’s Kochie.

The Crikey team shared a room with the ABC’s radio team (being only slightly distracted by the dulcet and commanding tones of Fran Kelly), who were left to read about the fate of their enhanced newsgathering budget being cut by $5 million a year as they tried to report on the budget as a whole. “The Hunger Games starts here,” joked one broadcaster, but they all survived until we were released from budget captivity. While in previous years, nicotine-deprived journos have resorted to a sneaky durry in the toilets less than halfway into the lockup, this year the air remained unexpectedly clean — possibly in anticipation of a tobacco tax from both sides of politics.

As the press filed into the seats for the centrepiece press conference, a seat at the front was labeled “reserved”, a luxury when more than half the journos in attendance were crowded around the sides, with only around 40 seats. When the Treasurer arrived with Finance Minister Mathias Cormann, Morrison headed straight to the podium, while his offsider took the reserved seat. Last year Cormann stood beside then-treasurer Joe Hockey, but today he was just a friendly face in the crowd, although he was encouraged by the reporters around him to throw a tough question at ScoMo.

News Corp’s Samantha Maiden pointed out to the Treasurer that Prime Minister Malcolm Turnbull would be getting a $6000 tax break in this budget, with the end of the deficit levy meaning more money in the pockets of higher-income earners. Morrison didn’t take the bait, though, and turned the focus to the Labor Party’s policies. While it was supposed to be a budget like no other, the phrase “jobs and growth” was inescapable, featuring no less than 24 times on the banner behind the Treasurer and throughout his talking points. At his best chance to speak about his own budget, Morrison attacked the opposition three times — so the “national economic plan” failed to disguise the launch of an election campaign.