From deer velvet to welcoming queue jumpers: the weird and wonderful

Thank goodness, the federal government is finally doing something about “gaps in citrus industry research and development funding”.

Every budget throws a few curveballs, even during times of jobs and growth. There is still time to put levies on hay and deer velvet, or invest in something as wonderful (depending on your point of view) as “beef roads”. Here we present the weirdest and most fun bits of the budget:

Make hay (and money) while the sun shines. The government has announced that it will transform a previously voluntary levy on every tonne of hay exported to a mandatory 50c levy on the fodder.

Wonderful, my deer. The government will also drop an excise levy and customs charge on deer velvet, as well as the customs charge on live deer, which is great for all the people who knew that deer velvet was a thing before today. This may or may not include your correspondent, who has been without access to Google all day.

Sour lemons. The citrus levy will increase by $1.50 per tonne on July 1 this year, with the extra funds collected to go towards addressing “gaps in citrus industry research and development funding”.

Let’s get digital. The budget has also allowed for $1 million for the Office of the eSafety Commissioner, “for digital resilience against violent extremism” as part of a range of counter-terrorism initiatives. The Stay Smart Online program has been funded for $404,000 this year, or, as it very appropriately appears in the budget papers, “404”.

There’s also $3.5 million over four years from 2016-17 for the Department of Education and Training (DET) to establish up to six academic centres of “cyber security excellence”. Whatever that is.

Operation Tetris. Mandarins’ favourite game — entitled Operation Tetris — is back in this budget, meaning that more departments and agencies will be poked, prodded and squeezed until they fit in smaller office spaces. The departments affected include the Department of Veterans Affairs, the Australian Electoral Commission, the Digital Transformation Office and the Environment Department, along with the Shared Services Centre and the Department of Education and Training. It’s expected to save $200 million over 10 years.

Palm trees and disgraced Libs. The graphics and case studies featured in the budget papers really convey the feeling of the mediocre ambitions of the policies. This explanation of how a tax haven works tells a thousand words: 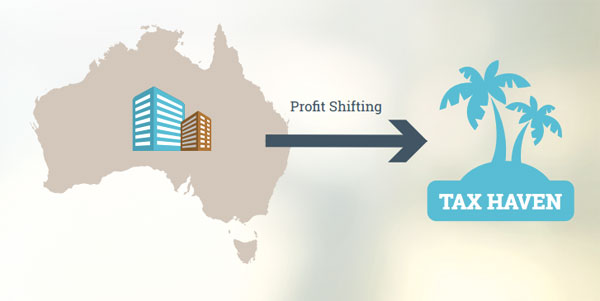 And the names chosen in these case studies sound just a tad familiar: Bronwyn and Jamie are benefits of changes to tax brackets.

Coincidentally (we are sure) their names match with Bronwyn Bishop and Jamie Briggs — not ones the government really wants to be reminded of today. 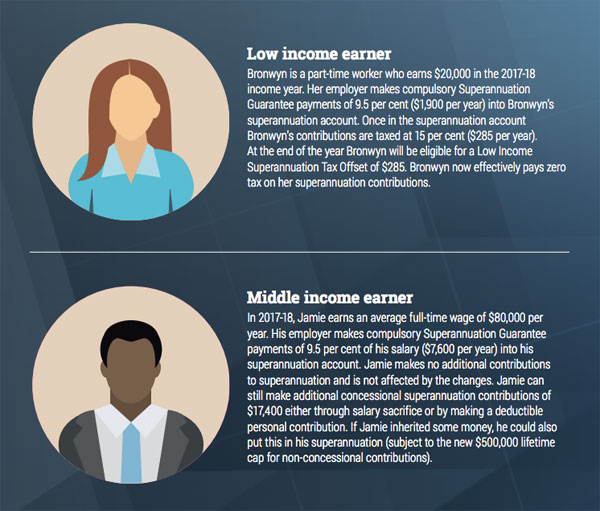 And these three young people are benefitting from the newly announced youth employment program — they end up at jobs in a supermarket, a coffee shop and a newsagent. Not very agile or innovative.

Barnaby carping on. Already announced on the weekend, Deputy PM Barnaby Joyce’s war on the European carp also gets a prominent mention. While the press release accompanying the papers avoided specifying that the carp would be culled by spreading herpes, the budget papers themselves let us know the specific strain — cyprinid herpes virus 3.

Say no to drugs. The government has pledged an extra $1.5 million over three years to the Australian Sports Anti-Doping Authority to supercharge its surveillance in the lead-up to the 2018 Commonwealth Games on the Gold Coast.

No more leaks. The budget papers include $18.3 million to “strengthen the main and side skylights within the APH. This funding has already been provided for by the Government.”

Our favourite acronym. The Australian Federal Police is getting $3.3 million to establish the National Anti-Gang Squad (NAGS) strike team in South Australia “to provide the Government with a coordination capability to detect, deter and disrupt gang-related crimes”.

No money for alcopops. Australian wine growers will receive a $50 million boost through a program to promote wine tourism within Australia and to advertise our vintages overseas. The government will also extend the “brewery refund scheme to domestic distilleries and producers of low strength fermented beverages such as non-traditional cider” — but not to alcopop producers, who “merely purchase the spirits and add the soda and other flavours”. That’s a win for hipsters, but a big blow to teenagers.

Border Force allows queue jumping. The government will raise revenue by allowing private airport operators to charge travellers more for “premium border clearance services for international air passengers, initially at Sydney, Perth and Melbourne airports”. Now you can skip the line to get into Australia, but only if you pay.