Memo to Moz: whatever you do, do NOT cut taxes

In an open letter to the Treasurer, econometrics writer Alan Austin shows how he can produce a surplus tomorrow and pay back the debt.

There’s good and bad news in all the data your government churns out. Mostly good. To the bad news first: income tax cuts are not on. Virtually all economists agree John Howard’s tax cuts before the 2007 election put us into structural deficit. We now have to get out of it.

And we cannot borrow more money from abroad. That would be highly damaging.

The rest is all good news. A surplus is achievable. You can start repaying the debt. You can slash the company tax rate. You can satisfy those ornery senators. And if you explain this honestly to the electorate, you can win the next election.

Here is where we will be this June, Scott, based on last week’s Finance Department March update:

Obviously, disastrous. But you can blame your predecessor for that. To fix it, however, we can’t cut total outlays. We actually have to spend a bit more to meet the urgent priorities, including Gonski, hospitals and cost-of-living increases for welfare recipients. But not much more.

Clearly, non-essential spending will have to go: political witch-hunts, public relations, travel and other perks for MPs and their six-figure pensions. Major cuts must be made to defence, border security and offshore detention. Let’s face it, Scott, whichever former immigration minister spent $55 million settling four refugees in Cambodia (and two of them have left already) was foolish indeed.

On capital investment, no, we can’t have 12 submarines. We can have six. But that’s no problem. Italy has the world’s ninth largest navy and gets by with six. Germany and Brazil each have five. Canada manages with four. Spain and Argentina have three. These countries all have much larger populations than Australia, and arguably higher security threats. So six subs. There’s $20 billion in forward spending savings already ($30 billion if they are built in France). 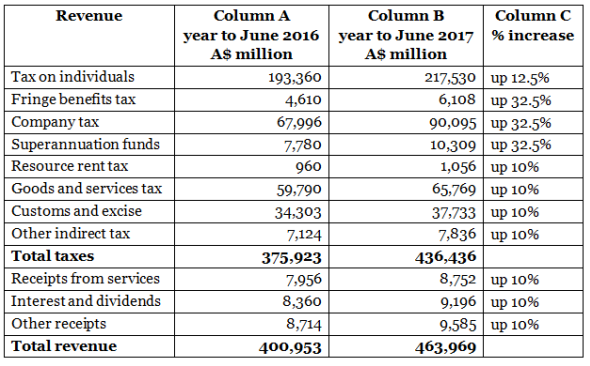 Most categories only need a 10% increase. That’s close to what would happen without tweaking the rates at all. Lift them one percentage point just to be sure.

Tax from individuals has to go up 12.5%. This is best achieved by cutting the rorts at the top end. So you won’t need to lift the tax rates. Just whatever you do, don’t lower them.

The great news is that you can slash company tax from 30% down to 24%. You then just have to make sure companies actually pay the 24%. The current joke — most big companies paying between zero and 10% — is no longer funny. So cut the unjustified exemptions and go after the cheats. The Tax Office is hot to trot on this. Give them back the audit staff Tony Abbott took away.

Do this, Scott, get back to surpluses, and you will be treasurer for as long as you want.

‘Borrow money from abroad’ huh? If foreigners want Aussie bonds we can afford all the interest required. What’s it take a little bit of bandwidth? Also not sure why we need a surplus seeing that would be extracting money from the non government sector.

“Urgent priorities, including Gonski, hospitals and cost-of-living increases for welfare recipients. But not much more.” You’re dreaming of course. You’re saying, “Spend more money on social welfare but not much more because we can’t afford it” when the demands for increasing social welfare spending are eternal, unrelenting and electorally popular for left wing parties.
Are we a lower taxing country? If so, it’s because our GST rate is far too low, a fact that you conveniently don’t mention. Income tax rates are unsustainably high and will hurt economic growth. But you always have your imaginary friend “the rich” who, when you analyse it, turn out to be PAYG earners at 80,000 PA and more.
Oh yes, “And cancel those subs! We have far better insight from hipster Fitzroy about Australia’s defence needs! You’re just rolling over for the evil military industrial establishment again!! I saw a movie about that only last week!”

Your second post today mentioning hipsters and submarines. Are to getting a sinking feeling?

Do you have evidence that our income tax rates are “unsustainably high” and affects growth rates?
He does mention increasing revenue from GST, which means that people spend more (unlikely), that the GST base is broadened to cover what is currently excluded and/or the rate is increased.
Hospitals and schools are not “social welfare spending” but essential government responsibilities.

Pure LNP/IPA ideological rubbish. Nobody ever gave up a dollar in increased wealth because they were going to pay tax on it. Nobody, ever. It’s a complete and utter myth.

Pure LNP/IPA ideological rubbish. Nobody ever gave up a dollar in increased wealth because they were going to pay tax on it. Nobody, ever. It’s a complete and utter myth.

Of all the poisonous lies propagated by the political right, the idea that the lowest taxes in half a century or more are “high” is possibly the most egregious.

The income tax system, in particular, has become far too flat. We need more brackets, and higher rates in those higher brackets, to reflect the income curve that looks more like a hockey stick every day. It’s absurd that someone on $200k sits in the same tax bracket as someone on $2 million (or even $1 million).

You guys were clearly not awake in the 70’s and early 80s when the wheels fell off Australia and New Zealand’s command and control tax and spend economies. The Labour government in NZ and Labor in Australia were visionary reforming governments whose positive impact on both countries’ economies will be felt for decades to come. One key reform was to reduce ridiculously high marginal income tax rates which penalised hard work, especially overtime, and thrift and laid the foundation of 30 years of uninterrupted economic growth.
In 2016, the Hawke and Keating reforming governments are an embarrassing legacy, especially income tax cuts, which don’t work in the class warfare and politics of envy that the progressive left relies on.

Yes and no, David.
Yes, Hawke and Keating reduced the nominal tax rates. But actually paying tax at those rates was so easily avoided or evaded that those rates had become meaningless.
So they then ensured that tax was actually collected at about the new , lower rates.
The same challenge remains today. Company tax is nominally paid at 30%, but in reality between 0% and 10%. If the Government were to drop the rate to 11% but actually collect it all that rate, the budget would be better off.
The article suggests 24% as optimum, as you probably noticed.
This would have – along with other sensible decisions – achieved a modest surplus in 2016-17.

The neoliberal philosophy implemented by Hawke and Keating that you love so much culminated in most of the rest of the world with the GFC. We were dodged that bullet, ironically enough in this context, thanks to massive Government stimulus in China.

But you just have to look at the outcome of the last thirty years to see the policy failure – we went through the biggest resources boom in Australia’s history and what do we have to show for it ? The country should have been set for generations, but instead we owe foreigners a trillion dollars, infrastructure is rotting, inequality is rising, local industry is gutted, financial fraud is rampant, and the economy is completely smothered by an enormous property bubble.

The question is, when inevitability comes knocking on Australia’s door, will people like you who have been responsible for creating the disaster, take responsibility for it ?

But I doubt whether the public would be happy if the government were going to raise the tax rates.

Intriguing comments. Thanks.
No, not dreaming at all, David. Essential spending items give us the start point. These include those mentioned. Australia has a poor future if education is compromised. So the $440 billion spend is fixed. Revenue can be found. Yes, the IPA and the rich will squawk. But they will do so anyway.
Yes, welfare demands are constant. These can be met within the $440 billion spend, provided waste such as in border protection is curbed.
Yes, the GST rate is relatively low. But a 10% increase in revenue from that will flow from a 10% rise in activity.
Paddy, there should be no need to lift the nominal GST rate. Revenue from GST went up 9.2% in 2010, and up 10.3% in 2014 – without adjusting the rate.
Wellsy32, it is not a question of affording the interest payments. It is a question of losing land title. At what point does this become an issue for sovereignty? Refer second last paragraph.