Abbott campaigns, parties, lectures on marriage equality. A tipster tells us former prime minister Tony Abbott and wife Margie were at Brisbane airport yesterday morning, “all loud and ebullient”, as they headed back to Sydney. Perhaps he is enjoying not having the responsibility of a pre-election budget this week? Our tipster says the Abbotts were returning from the 60th birthday party of Santo Santoro — the former MP and Liberal powerbroker. Abbott made good use of the trip north, appearing at a function with Senator Joanna Lindgren and a number of LNP candidates at the upcoming election. 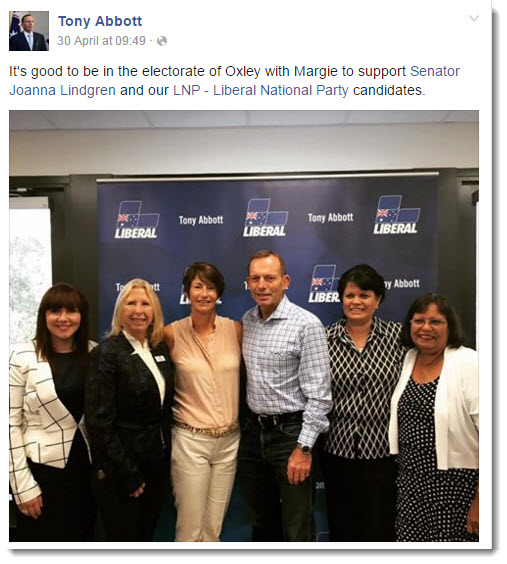 News Corp’s Samantha Maiden reported last month that Abbott would be touring around marginal seats in the lead-up to the election, although he has not been given a formal role by the Liberal Party. Lindgren was in the Abbott camp in September’s leadership spill. Abbott’s office tells us that he was in the Sunshine State to give the Father Gregory Jordan Memorial Lecture, launching a scholarship fund named after his Sydney school headmaster. He used the speech as a chance to rail against section 18C of the Racial Discrimination Act and defend his position on marriage equality:

“A generation ago, for instance, the challenge to the Church was the proposition that homosexuality was a fact of life and that ‘sin’ should not be proscribed by law. Today, the challenge to the Church is the proposition that same sex marriage is merely an extension of the commitment that all domestic partners should have for each other and that the Church’s conception of marriage as a sacrament should no longer be enshrined in law.

“The traditional concept of marriage won’t be maintained by a claim that the Church’s right to free speech is under threat — though it is. It will only be maintained by preserving or by rebuilding the old consensus that, ideally at least, marriage is an exclusive union entered into for life by one man with one woman in the expectation of children.

“It can’t be denied that the traditional understanding has been battered by the growing acceptance and prevalence of divorce and remarriage. The path to same sex marriage has been smoothed by the acceptance and understanding given to gay couples, often with children. The instinctive human decency that leads us to reach out to people who are trying to make the most of their circumstances however unconventional is at odds with our instinctive support for ideals of conduct that have stood since time immemorial.”

The story to go viral. While the government spent the weekend dropping big-money announcements ahead of the budget, one of the best announcements from the government hasn’t quite caught on — yet. Science Minister Christopher Pyne is promising a “carp-ageddon” with the federal government announcing that a strain of herpes would be released into the Murray-Darling river system to eradicate the European carp — an introduced species that Agriculture Minister Barnaby Joyce calls the “rabbits of our waterways”. Senator Anne Ruston borrowed a line from the Prime Minister, saying “there has never been a less exciting time to be a European carp”. Pyne couldn’t answer when asked how the carp would catch the virus, but scientists told the ABC “random carp-to-carp encounters” would spread the virus.

Best and brightest. The nation’s newspapers are gearing up for the budget, with most featuring banners of their best and brightest commentators to be reporting from the lock-up tomorrow. Notice any similarities? 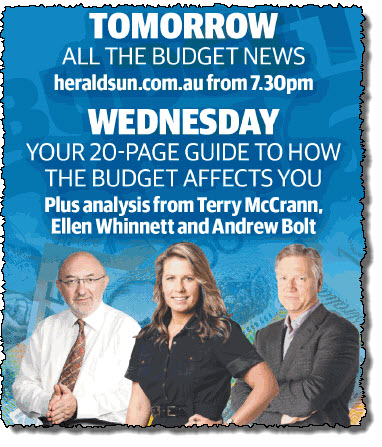 Turnbull’s SeaLink connection. Queensland MP Ewen Jones announced last week that the government had awarded a $45,000 grant to SeaLink, the ASX-listed ferry and cruise operator that runs tours out of Townsville. While the funds for staff training programs under the Australian government Industry Skills Fund is in not lavish, one local found it interesting that the company’s connection to the government was not mentioned:

“It sounded as if this small cash offering would rival the miracle of feeding the hungry multitude with gluten free loaves and fishes. The reporters took the bait, went away and dutifully ran Ewen’s spiel. Astonishingly, nobody in the media raised the fact that Lucy Hughes Turnbull, wife of the PM, had been both a director and deputy chairman of the Sealink board and had stepped down in October 2015 after Malcolm dethroned Abbott.”

Nothing like a dame. The letter written by the Queen repealing Knights and Dames as part of the Order of Australia has been published as part of Senate estimates questions on notice. Elizabeth Regina needs no surname, of course: 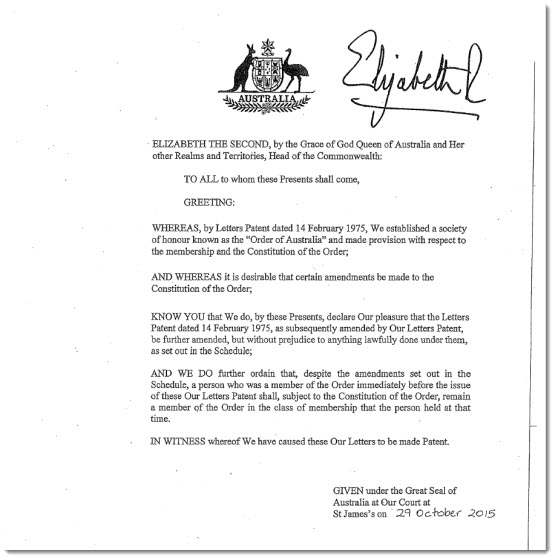 You missed the Curry or Maul’s page 4 “WE’LL HELP YOU DECIPHER THE BUDGET” bugle call ….. 13 pages later (“Pregnant mother chained toddlers in back yard”) we were told “… The other six – five girls and three boys ….”?
Limited News and figgers?

Can’t wait to read Miranda or Tim’s ‘analysis’. God that’s a misuse of a word if ever there was one.

The help offered by the Terrorgraph’s has to be the least reassuring since Mephistopheles ‘assisted’ Faustus.