On April 26, Justice McMeekin of the Supreme Court of Queensland handed down his judgement in the case of “Q”.

Q is 12 years old, and she was nine weeks pregnant. She and both her parents had requested an abortion. In the previous month she had been seen by a general practitioner, two gynaecologists, a psychiatrist and a social worker (several times). All agreed that an abortion was appropriate in the circumstances.

Yet somehow, someone found that it was necessary that a judge of the Supreme Court should make the decision that the abortion could take place (which the judge duly did). Indeed, the judge states in his reasoning that it is appropriate that decisions about terminating the pregnancies of 12-year-olds should be referred to the Supreme Court. This event is extraordinary and alarming, both in itself and in its implications for the women of Queensland.

Reading through His Honour’s judgement one might gain the impression that pregnant 12-year-olds are rare in Queensland, indeed that the last time such an event occurred was 2008 in the case involving “B”.  However, figures from Brisbane’s Children by Choice  (CbyC, a government-funded agency offering advice to women with unplanned pregnancies) show that in the nine months to March 31 this year, 75 calls were received by the service about a 12-year-old’s unplanned pregnancy.

Some of these calls probably concerned a single case, but considering the time lag between calls, it is reasonable to arrive at a conservative figure of 25 pregnant 12-year-olds seeking help. CbyC deals with only a proportion of unplanned pregnancies in Queensland; others would have sought help directly from health service providers, so the number of pregnant 12-year-olds annually in Queensland is probably closer to 50 and could be more.

The vast majority of these girls (who are perhaps better described as very young women) would have had their pregnancies quietly terminated — without the involvement of the courts. The young women would have consulted their doctors, who would have judged them, and their parents or guardians, as possessing the necessary intelligence and insight (in legal terms the “capacity”) to make the decision to request termination. These doctors would also have considered sections 224-226 and 282 of the Queensland Criminal Code and the precedent of the Bayliss case of 1986, and decided the situation met the requirements that continuing the pregnancy posed a greater threat to the (young) woman’s mental and/or physical health and/or life than a termination.

Most of these 12-year-olds would have been dealt with in the private health system, at considerable cost to their families, or would have been sent interstate for the procedure, but it would have been done without the added stress and significant cost of a court process. In Q’s case, it seems the health professionals working with the young woman — and more importantly, probably, public hospital administrators — were so nervous of prosecution that they insisted the young woman and her family seek a determination from the Supreme Court.

The implications for Queensland women, particularly very young women, in the immediate future, are worrying. What about pregnant 13- and 14-year-olds? There would be more than 200 of these each year in Queensland. We know that already each year around 150 Queensland women travel interstate to undergo abortions they could not access in Queensland (CbyC figures).

The real fault here lies not with health professionals but with the archaic Queensland abortion laws and the willingness of authorities to invoke them. In 2010 we saw the prosecution, in the District Court in Cairns, of a young couple who had imported drugs to procure an abortion for the woman — ironically, exactly the same drugs that McMeekin ordered to be given to Q. The couple were acquitted, but only after 18 months of intense and unwanted publicity and the stresses of a jury trial. Now a similar ordeal has befallen a 12-year-old.

In the 21st century Queensland abortion law remains in the 19th — in the Criminal Code of 1899, virtually unchanged, while medicine and society have moved on. The result in Queensland is increased anxiety and reluctance on the part of doctors to be involved in performing abortions, even though we know that around half of all pregnancies in Australia are unplanned.

Queensland Health guidelines make it clear the health team can make a decision to provide a termination even in cases involving very young women. But in the light of Q’s experience, in future cases involving young women and girls, doctors may be more inclined to seek a court declaration about the lawfulness of a termination. This is a real concern.

Victoria and the ACT have decriminalised abortion; Tasmania has largely done so. There have been significant reforms elsewhere in Australia, although more are needed. Queensland state governments have routinely failed to act. The Q case shows how critical the situation is.

*Caroline de Costa is professor of obstetrics and gynaecology at James Cook University, Cairns; Heather Douglas is professor of criminal law at the University of Queensland, Brisbane, and is on the management committee of Children by Choice

Abortion, Queensland and a law unchanged since 1861 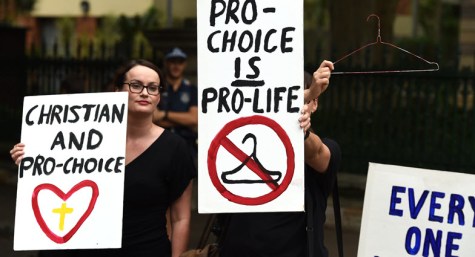 When so many supposedly bright people can’t see the need to make it as straight forward as possible to ensure youngsters do not become breeding stock, the Nation will be doing a good job of creating disasterous futures for Australians.