Lifestyles of the rich and the famous.

While most of us don’t pay much attention to the humble fork, artist Van Rudd has been collecting forks used by the rich and powerful to be displayed at the Footscray Community Arts Centre next week. Rudd has collected the forks, including those used by Rupert Murdoch, Prince Harry and Hillary Clinton, while working in hospitality at functions attended by the 1%. The Facebook page for “The Rich Forks” describes the project:

“What if luxury dinner forks of the wealthy one percent were taken from under their noses and displayed to the public? This ongoing exhibition is a result of that exact task. Taking something back. Re-appropriating a tiny piece of the vast amount of wealth stolen from us. Just think of the #panamapapers revealing that as of 2014, at least $7.6 trillion of the world’s financial wealth – or about 8 percent of the world’s total financial wealth of $95.5 trillion – was ‘missing’. So, this is an ongoing exhibition for the people, by people. It’s a small gesture, but symbolically, and perhaps artistically, it can mean the world.

Luxury dinner forks have been swiped (or ‘di-Looted’) over a 15 year period from 5 star hotels from different parts of the world, complete with the saliva and food stains of their users, and will be displayed in public/community spaces locally and around the world in the coming years. This project can also be ongoing.”

According to Facebook, Rudd is still on the lookout for more forks: 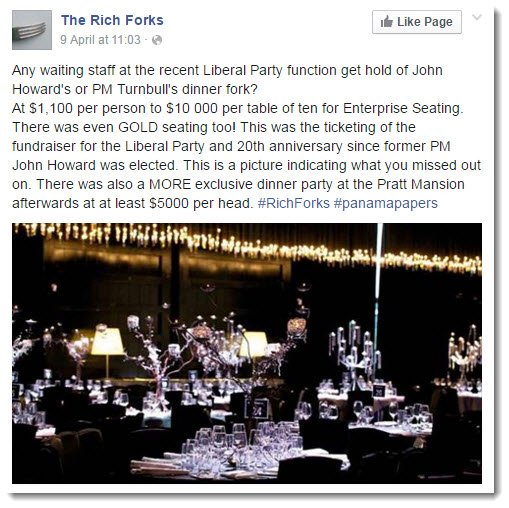