Rundle: let’s go Mauricing. Heeeee’s baaaaaaaaack. Yes, there’s every indication that new Australian editor Paul Whittaker, aka the human traffic cone, is taking the Oz‘s op-ed pages back to what it was under Paul Kelly, i.e. a mesmerisingly boring series of memos to department heads. But there’s always Maurice. We’ll always have Maurice Newman. The man who made his career in the protected Australian banking sector and now lectures everyone about free enterprise has a real chrestomathy of complaint, strung together in the form of an article. Let’s give it a Mauricing.

The spine of the piece, to the degree it has one, has something of a commonality with the American “Obama caused Trump” pieces. Maurice damns Julia Gillard for destroying “white picket fence values: while ordinary voters “looked on helplessly” — helpless save for voting John Howard out, electing Gillard in her own right, and only consenting to vote for Abbott when he committed to Labor’s program. Now because of this:

“Next week, we can expect a piecemeal budget, cobbled together and wrapped in the appropriate prudential rhetoric. Its impact on the deficit will be feeble. The Coalition and Labor argue growth will bring us into balance.’

In other words, Gillard is responsible for the Coalition’s 2016 budget. How powerful these Fabians are! This is conservative derangement syndrome at its finest: constituting an imaginary suburbia — contrary to the real one, which showed its hate for Abbott and his budget and 40 consecutive polls, and only consent to vote Liberal when they adopt progressive Laborish policies.

So we’re back to the “silent majority” again — they’re out there somewhere. That’s a change from the neo-elitism Newman and others spruiked when right-wing state governments started to fall. The line then was that the people couldn’t be trusted: only a post-democratic rectitude could solve things. That will be back if people vote the “wrong” way again in ’16. For the moment, it’s the old rootless cosmopolitan cause. In one great passage, Australia’s leftists appear to be blamed for:

“It’s the mentality that would spend $22 billion a year on the National Disability Insurance Scheme, $70bn-plus on an unnecessary National Broadband Network; that wants sniffer dogs off trains; and, in Belgium, bans police raids between 9pm and 5am.”

From tech infrastructure to Belgian operational services practice. We are everywhere. That must be why Turnbull is running 50-50 against an opposition whose post of leader is essentially vacant, and only stopping short of falling behind by adopting collectivist, economic policies, a la les bonnes vraies-blueues submarines.

Ah, Maurice, the last of the Howardites — he’s even willing to repeat the fantasy that Howard was anti-immigration (“Weak border protection and admission criteria have seen the over-representation of ethnic minorities in our jails”). What’s to bet that most of those non-Anglos “crowding” our jails came in legally during the most transforming sustained immigration program in our history — the one that occurred from 1996 onwards?

Pure joy. And a “new world order” reference too. Ceaselessly entertaining — and a measure of how pathetic the Australian right have become, ending with no will, just a banker. — Guy Rundle

Uber still plays dirty, Huffington on board. Governments around the world have put the brakes on ride-sharing service Uber, prompting the San Francisco-based start-up to play dirty. BuzzFeed revealed in 2014 the company considered digging up dirt on critics in the media, including journos writing on sexual assaults by Uber drivers. Yesterday, writer Michael Theis at the Austin Business Journal revealed:

“A lobbyist for Uber Technologies Inc. has filed an open records request to obtain more than a year’s worth of my emails and text messages sent to city of Austin elected leaders and staff.

“Uber’s Austin-based lobbyist Adam Goldman, CEO of Congress Avenue firm The Goldman Group, filed a public information request with the city of Austin on April 22 seeking the emails and texts that I sent to City Council members, their policy aides, staff in the Austin Transportation Department, and the city attorney’s office for a period stretching from Jan. 1, 2015 to April 22, 2016.”

Few people would have found Theis story in the local rag were it not for a pick-up this morning by The Huffington Post. That’s interesting in itself because HuffPo founder and hands-on editor-in-chief Arianna Huffington announced this week she was joining the Uber board. The site was quick to point out the newsroom firewall; Huffington had “recused” herself from any coverage of Uber, she said in a blog post, and an independent editor had been appointed to handle any related stories.

HuffPo even had a labour reporter investigate the potential for conflict in the newsroom, quoting one media ethicist saying it’s “definitely a concern” and another saying “I wouldn’t have done it [joining the board] if I were her”. The Washington Post also reports on one story pitch on a dodgy Uber driver apparently spiked by editors at HuffPo — as recently as April 6 — due a joint campaign planned with Uber on drowsy driving. — Jason Whittaker

Discrimination suit at the Times. Two black female employees at The New York Times are taking the paper to court, claiming its executives created an “an environment rife with discrimination”. Says the lawsuit:

Video of the day. “I’m more afraid of Hillary Clinton’s war record and hawkishness than I am of building a wall.” Why “patriot” Susan Sarandon had to break up with Clinton — and back Bernie Sanders. (And if you want to know why you should be watching Stephen Colbert’s Late Show over other late-night fare, read Jason Whittaker’s talk show guide at Daily Review.) 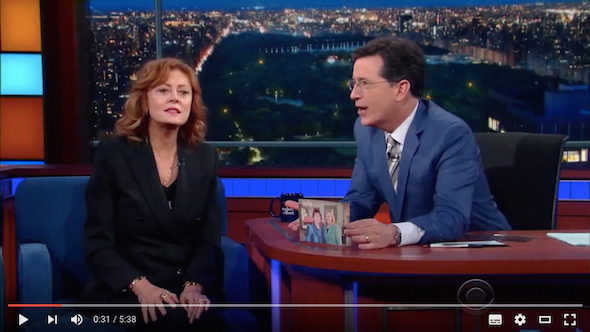 Lessons from the Berlin Wall

US Democrats in the fight of their lives with SCOTUS nomination

Can we please have a sitcom premised on Guy Rundle sharing a Fitzroy apartment with Maurice Newman?