Turnbull picks up the phone. The government is using the announcement of the $50 billion submarine contract to spruik its credentials to voters in Adelaide with a recorded phone message from Prime Minister Malcolm Turnbull himself. Voters in the electorate of Sturt received the message yesterday, which also highlighted the work of Industry and Innovation Minister Christopher Pyne. Voters heard:

“Hello, I’m Malcolm Turnbull. Yesterday we announced the building of 12 submarines in Adelaide. This follows our commitment to build offshore patrol vessels, starting in 2018, and nine future frigates, starting in 2020. This keeps naval shipbuilding jobs and skills in Adelaide. This is part of our plan for the future. Your federal MP, Christopher Pyne, is a strong advocate for our plan to secure South Australia’s future. Thanks for your time.”

The 30-second message was recorded by a Crikey reader and can be heard here. We have also heard that the message has been received by voters in the seat of Mayo, but we don’t know whether that message also lauds Pyne, or his colleague Jamie Briggs. With an election bearing down on us, the government is taking all measures possible to ensure that even the most stealthy submarines can’t be missed.

Puns for policies. Senator John Madigan, previously of the Democratic Labour Party, and now head of the eponymous John Madigan’s Manufacturing and Farming Party, has released a campaign advertisement series that brings together the best tropes of the genre. Madigan doesn’t speak in his own advertisements, using the line: “John Madigan won’t tell you how great he is. But his constituents will.” There’s also a quote from Bob Geldof.

Featuring constituents from country Victoria praising Madigan for his work and labelling him “a different kettle of fish altogether” when compared to other politicians, the three-minute video is one in a series of people railing against “robots wearing red and blue ties”. The slogan for the fundraising campaign is “Don’t get mad. Get Madigan.” 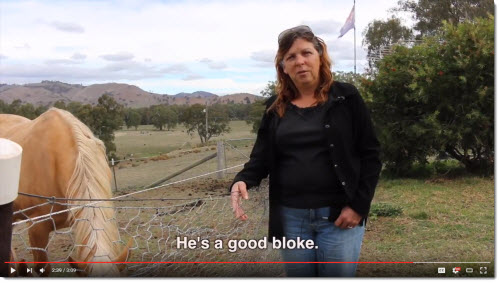 Carbon tax zombies attack. The ghosts of governments past were haunting Bill Shorten yesterday, and the Opposition Leader won’t be able to shake the lines of his predecessors when it comes to selling his climate change policy. In a press conference yesterday, Shorten invoked Julia Gillard when he started “there will be no carbon tax …” and then a pause long enough for us all to ask, is he really going to say “under the government I lead”? Instead he ended with “under Labor”. The full grab is, “There will be no carbon tax under Labor, there will be no fixed price under Labor”. It’s close enough that the Liberals already have a scare campaign ad (with a weird circus jingle) shared online.

Gillard’s climate policy wasn’t the only spectre hanging over Shorten yesterday, with a journalist asking “Mr Shorten, is climate change still this generation’s great moral challenge?” The Labor leader didn’t come as close to quoting Kevin Rudd, avoiding the moral element all together:

“Climate change is the great challenge to household cost of living, and to our economic performance in the future. If we don’t start acting on climate change and doing our bit along with the rest of the world to tackle the harmful effects of climate change, we’ll pay the price. Increased insurance premiums, irregular and inconsistent supplies of food caused by drought, we’ll see it through impact on tourism and loss of jobs.”

Close, but no cigar.

Flying Heap of Crap Watch volume 67,687,934,568,587,608,706,824,230,294,754,645. We know readers love F-35 news, and we’ve got two cracking updates for you. So: the plane’s software, supposedly central to its superiority over rival aircraft — after all, being a plane that can’t fly, can’t shoot and can’t dogfight, obviously there must be something it’s good at — has been, alas, somewhat troubled, like pretty much everything else about the Lockheed Loser. Two weeks ago, the US Government Accountability Office released a report on the F-35 warning of a looming disaster. It found “the Department of Defense (DOD) is aware of risks that could affect the F-35’s Autonomic Logistics Information System (ALIS), but does not have a plan to ensure that ALIS is fully functional as key program milestones approach.” The GAO concluded that “ALIS may not be deployable … ALIS does not have redundant infrastructure: ALIS’s current design results in all F-35 data produced across the U.S. fleet to be routed to a Central Point of Entry and then to ALIS’s main operating unit with no backup system or redundancy. If either of these fail, it could take the entire F-35 fleet offline.”

The entire fleet … offline. Then again, since the F-35 has trouble taking off without its engines catching fire, perhaps that’s not such a major problem. But “by continuing to respond to issues on a case-by-case basis rather than in a holistic manner, there is no guarantee that DOD will address the highest risks by the start of full-rate production in 2019, and as a result, DOD may encounter further schedule and development delays, which could affect operations and potentially lead to cost increases,” said the GAO. Oh, and just in case you were wondering — “schedule slippage and functionality problems with ALIS could lead to $20-100 billion in additional costs.”

No wonder that, overnight, GOP Senator John McCain, who as a former navy pilot knows a thing or two about jet fighters, attacked the entire program as “both a scandal and a tragedy with respect to cost, schedule and performance”. How many of these suckers are we wasting money on again?

ABC safety. Staff at the ABC’s Ultimo headquarters were sent the following safety message this morning, and judging by the advice, we’re glad they are doing a practice run:

“We are testing our response to a security incident. The building is being locked down. Please remain in a safe. Please do not attempt to exit or enter the building during the exercise and wait for further information. The exercise will take no longer then 30 minutes and you will be informed when it is concluded.”

The only ABC staff that could fit in a safe are Big Ted and Little Ted.

Politicians and their recorded messages – they don’t realise what sort of message that translates too, re their sincerity, treating us as just a number?
Treat them and their party like a number in return – the highest applicable on the ballot.

And “flying” (heap of crap) – if only? Another of “Honest John’s government’s (that included much of this one) little dividends”?

Re: Carbon tax zombies attack…I am totally fed up with everyone in the MSM (and now Crikey it seems) MISQUOTING what Julia Gillard actually said.
Here is the sentence IN FULL: “There will be no carbon tax under a government I lead, but let me be clear: I will be putting a price on carbon and I will move to an emissions trading scheme.” (A simple Google search will give you a multitude of references.)
Now…could you please explain how PM Gillard lied? Just because the rAbbott and all his mad cronies said so, DOES NOT MAKE IT SO!!!

F-35. Why is Crikey always so hysterical about the F-35 ?
Sure it’s a poster child for a bad Pentagon procurement program (like the F-111 before it), with its massive time and budget over-runs, huge technical dramas and armies of detractors. But the finished product will probably be an effective weapons system for many years, and like the F-111 the purchase cost will ultimately be a small component of the overall program cost.

Todays theatrics include F-35 ALIS. (Or spare parts ordering system.) A quick look at the GAO report shows that the GAO accounting pinheads say ALIS needs to plug in to power to operate, and the Air Force hasn’t got a 600,000 page manual showing the power points at every single airbase that the F-35 might ever operate from.
Big. Fcuking. Deal.

Would an F-35 squadron would ever deploy without a box-full of LRU’s ? No. So the IMMEDIATE need for automated logistics management may not be QUITE as pressing as the author suggests.

It’s ironic to see a loyal Julia Gillard acolyte suggesting a simple google search would clear her name, apparently oblivious to the fact that such a google search, or even the ability to analyse other documentary evidence then available , would have highlighted the fact that if voters knew more about her legal activities before she became a Parliamentarian it’s probable her Parliamentary career wouldn’t have got off the ground.